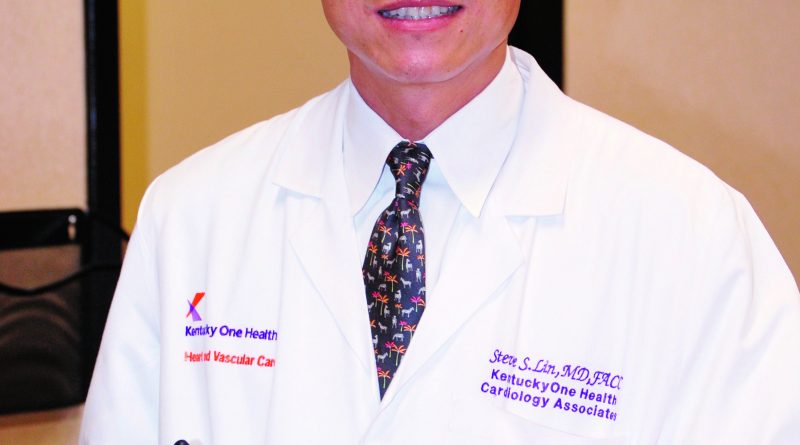 LEXINGTON For Steve Lin, MD, cardiovascular disease physician in Lexington, Ky., becoming a doctor was in his veins. As the son of a cardiologist with several siblings and other family members with medical degrees, he always had a passion for becoming a cardiologist.

Originally from Taiwan, Lin grew up in Los Angeles, where he earned his undergraduate degree from UCLA before going on to medical school at Loyola University in Chicago, completing his residency in internal medicine at the Mayo Clinic, and obtaining further training in cardiovascular disease at the Cleveland Clinic Foundation.

In 2000, Lin moved with his family to Lexington and began working with Cardiology Associates of Kentucky, now KentuckyOne Health Cardiology Associates. “It was a great practice opportunity and Lexington is a great place to raise a family,” he says. “As a new physician, I had plenty of opportunities to build my practice and focus on the type of care I was trained to do.”

Like many cardiologists, Lin began his practice focusing primarily on cardiology. Over time, his focus broadened. “Many patients with heart disease also have vascular disease,” he says. “I spent additional time at the Cleveland Clinic learning about vascular ultrasound. It was a natural extension for me to expand towards vascular care to serve the needs of the patients in our practice.”

Venous disease is the most visible and most prevalent vascular disease, but also the most overlooked, because the vast majority of patients do not have clearly defined or acutely threatening symptoms. Many have symptoms that can interfere with their lifestyles, but they do not seek treatment or have been neglected in their venous care.

“In the US, 100 million people have primary venous disease,” says Lin. “That doesn’t mean they all need medical or procedural care. However, venous disease can progress over time, and both patients and providers should be better educated about that.”

Venous disease can increase with age, in terms of prevalence and severity. Many people think venous disease is a cosmetic issue, but it can involve much more than varicose veins. Some patients with venous disease do not present with prominent varicose veins; in fact, many with advanced complicated venous hypertension may simply have dependent swelling with skin changes such as discoloration or ulceration. Women have a higher incidence of venous disease than do men. Most of the patients in Lin’s practice are middle-aged or older with symptomatic venous disease and complications.

A significant portion of Lin’s patient referrals come from the wound center, primary care physicians, podiatrists, or cardiovascular colleagues for evaluation or unexplained limb swelling, many involving advanced venous disease. They often have multiple comorbidities, including heart disease, peripheral arterial disease (PAD), and some type of refractory swelling or wound. “My goal is to optimize the venous care of these patients by combining my training in cardiology, imaging, and interventional techniques,” he says. “Many times, it doesn’t involve procedural care, but a combination of conservative management and lifestyle change such as compression stockings, weight loss, and leg exercises.”

When assessing his patients, Lin typically utilizes venous duplex to establish a detailed venous roadmap of the problem. “We do a full reflux ultrasound that is not typically done as part of most hospital venous ultrasounds,” he says. “The reflux ultrasound is done with the patient in an upright position. In some patients with advanced skin changes or unusual varicose vein locations, we would image the proximal deep venous system looking for obstruction or compression.”

Left untreated, venous disease can lead to other complications, including thrombophlebitis, cellulitis, edema, and a variety of skin changes that come with venous hypertension. For some patients, it can decrease quality of life and force them to limit physical activity because it can be very uncomfortable with prolong standing. Patients with careers that involve chronic sitting or standing, such as hair stylists, commercial drivers, fast food workers, and even healthcare staff in operating or interventional suites, can be affected in their job performance.

When it comes to ranking the three major risk factors for venous disease, Lin names family history as the highest contributing factor. Lifestyle comes in second, for people who spend a lot of time either sitting or standing. Lastly, it is very prevalent in patients that are obese. “Just about all patients that are morbidly obese have some degree of venous hypertension,” he says.

Lin is also the medical director for the Healthy Lifestyle Centers at KentuckyOne Health, a lifestyle medicine program fully staffed by clinical providers, exercise physiologists, social workers, and dieticians. This is the only center in Central Kentucky that offers the Ornish Program for Reversing Heart Disease, the only program scientifically proven to undo atherosclerotic heart disease. “This is a game changer that compliments best medical and procedural care. This has become one of the most gratifying aspect of my practice to see the transformational improvements patients achieve with this program,” he says. In addition to reversing the progression of their atherosclerotic disease burden, the participants are spiritually and emotionally fulfilled through group support and stress management while achieving remarkable improvements in weight reduction, blood pressure, glucose, and lipid parameters despite reductions in their medication regimen.

The patients who come into the Ornish Reversal Program are patients who have had prior heart attacks, bypass surgery, coronary stenting, or prior valvular surgery, but some of them also have primary venous disease in addition to their heart disease. For those patients, as they reduce weight and improve their calf pump function as they become physically active, their venous hypertension symptoms improve.

“The level of patient satisfaction is beyond any program I’ve been involved with,” says Lin. “They basically go through a lifestyle transplant, but with the amazing team we have, patients feel like they are going to lifestyle spa.” Some providers were astonished to find out how much their patients enjoyed and looked forward to attending the “sessions.” Lin praises the fantastic team involved at the Healthy Lifestyle Centers. “If you attend an Ornish graduation ceremony, you will see that Coach Calipari does not even have the best team in Lexington!”