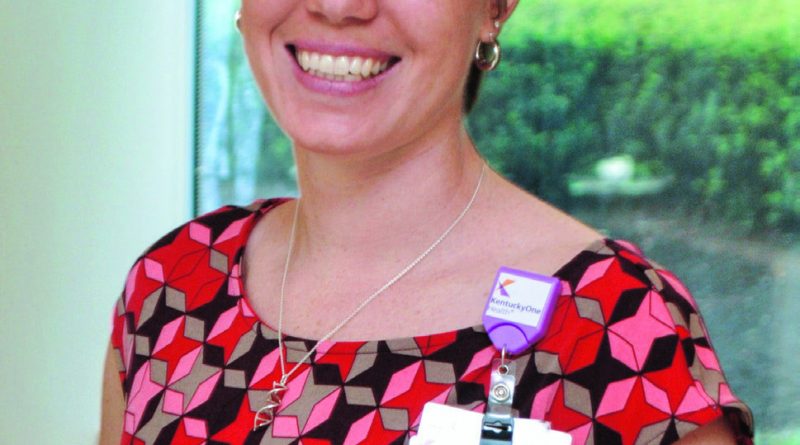 LEXINGTON If the first image that comes to mind when you hear the term genetic counselor is a person who studies and counsels the family of a newborn with an unexpected abnormality, you have missed a lot in the past few years. The revolutionary impact of molecular genetics and the ability to study the human genome in detail has vastly broadened the scope of the genetic counselor. Many forms of cancer have now been linked to specific mutations in the genetic code. Testing and counseling patients and relatives with these kinds of cancer is the focus of the work done by Liz Reilly, MS, genetic counselor at KentuckyOne Health in Lexington.

Reilly grew up in Berea and followed in an older sister’s foot-steps to attend Xavier University in Cincinnati where she obtained a B.S. in Biology. She then obtained a Master of Science degree in Genetic Counseling from the University of Cincinnati. Both proximity to family and the wide spread presence of KentuckyOne Health in Eastern Kentucky drew her to her present job as a genetic counselor in the Cancer Care department in Lexington.

Most people are familiar with the genetic form of breast cancer caused by mutations in the BRCA1 or BRCA2 genes because some celebrities have opted for a pre-emptive double mastectomy when it is discovered that they carry a mutated gene. This is the form of counseling Reilly does. Clearly, choosing a double mastectomy with no evidence of breast cancer is a major decision for anyone. Reilly’s job is to map-out a family tree, assess environmental exposures, order and review genetic testing to give the patient an accurate prediction of their chances of developing the cancer and also explain the sorts of early detection and treatment available should the patient opt for a wait and see approach.

Reilly is quick to point out that these kinds of population-based studies do not tell the whole story of risk. “Each woman’s risk is different and will be affected by family history of cancer, reproductive history, and the woman’s age at the time of consultation, to name a few,” she says. As important as risk assessment and discussion of treatment options is today, the future will very likely bring molecular and immune modifying therapy that can be individualized for maximum efficacy in treating each type of cancer in each particular patient.

The BRCA mutations are only one example of genetic predisposition to cancer. There are now known genetic mutations for certain types of cancer in almost every organ of the body. Many mutations are linked to more than one type of cancer, and some cancers are linked to several different mutations. Most prominent, but not exclusive, cancers in Reilly’s practice are breast, colorectal, and female reproductive tract.

With ever increasing healthcare costs, the question must be asked, is genetic testing of healthy people a good idea financially? To this Reilly gives an emphatic yes. “Preventive and proactive care has been shown to decrease healthcare costs because these patients are not sick and do not need the most expensive kind of healthcare, such as costly cancer drugs, radiation, and prolonged stay in intensive care units, as they would if they were diagnosed after symptomatic tumors had grown,” she says. As an example of proactive care, Reilly points to people with a high risk of colon cancer. Normally colonoscopy is recommended every five to 10 years, but in a high risk patient, the procedure could be done every year to detect tumors early and possibly remove a pre-cancerous polyp. Patients with a high risk of breast cancer can choose to have breast MRI in addition to mammography. Although uterine and ovarian cancer are not screened for in the general population, women at high risk for these cancers can have yearly screening performed or even consider total hysterectomy.

Reilly maintains close relationships with oncologists, OB/GYN physicians and with colonoscopy centers. Part of this relationship is education of the primary care providers. Referral on the basis of an abnormal finding on physical examination is well understood, but Reilly urges doctors to send patients with a normal physical examination if there is a red flag in the family history such as different cancers in the same person, cancer diagnosed under age 50, or a combination of breast, ovarian, uterine or colorectal cancer in a single family. Of course, it is important that physicians question family history for both sides of the patient’s family.

In the general population and even among some healthcare professionals, there are some misconceptions about genetic testing and counseling. Some people believe that genetic counseling is a service that only the wealthy or high middle class can afford. The reality is that genetic counseling and testing is available to everyone with a medically legitimate issue, and there are resources to help the uninsured or under-insured. Reilly repeats the mantra, “Cancer has no idea how much money a person makes or how nice they are. Cancer does not discriminate.”

Another fear based on misperception is that if a person gets genetic testing because of family history or as a participant in a research study and a mutation is discovered, they will be unable to get health insurance or even employment. In fact, there is a federal law that has been effective since 2009 that specifically prohibits discrimination by health insurance companies and employers based on “genetic information.” This law is called the Genetic Information Nondiscrimination Act, usually referred to as GINA. It should be noted that GINA does not apply to life insurance and long term disability insurance. These are policies that patients may want to get in place before having genetic testing.

As a final message, Reilly reiterates the goal of genetic counseling at KentuckyOne Health is to identify people at risk before they develop cancer, so they can undertake preventative measures or detect cancers early and be treated proactively when the growth is very small or pre-cancerous.