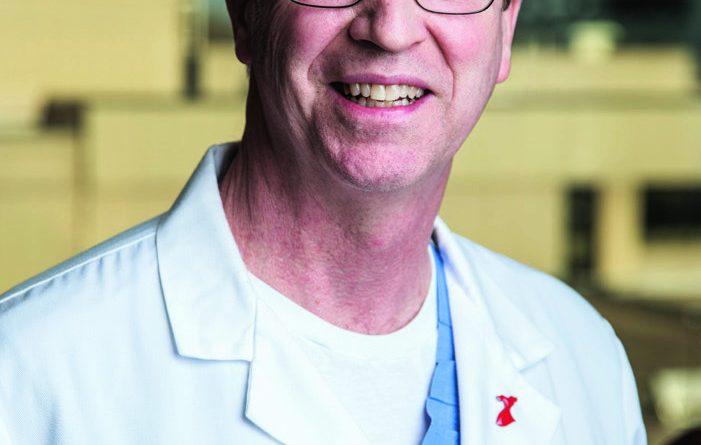 LOUISVILLE When it comes to complex pathologies of the heart, and the growing number of technological advancements used in treatment, the trio of cardiac surgeons with Baptist Cardiac Surgery at Baptist Health Louisville have set out not only to do it all, but also to simply do it better.

The three surgeons – Samuel Pollock, MD, Sebastian Pagni, MD, and Ahmad Kahn, MD – share a treatment philosophy that seeks to not only provide comprehensive services but also to do so with a genuine team approach that tailors each procedure to the patient’s individual needs.

Pollock came to Baptist Health in 2002 as part of a private cardiac surgery practice that became employed by the hospital in 2010. He attended medical school at the University of Kentucky and completed his general surgery and cardiac surgery training at the University of Alabama at Birmingham. Growing up, his father was the manager of the Trover Clinic in Madisonville, Ky., his next door neighbor was a general surgeon, and his first summer job was at Hopkins County Hospital. Those experiences let him know very early on that he wanted to be a surgeon.

Pagni joined Baptist Health in 2013. A native of Argentina, he completed medical school in Buenos Aires before a series of vacations in the United States led him to move here. He completed his general surgery residency at the Hospital of Saint Raphael at Yale University and his fellowship in cardiovascular surgery at the University of Louisville and Jewish Hospital. When Pagni joined Baptist Health, he brought with him an affiliation with Floyd Memorial Hospital and Health Services. The three Baptist Health cardiac surgeons are the same physicians that perform surgery at the Floyd Memorial Heart and Vascular Center in New Albany, In. (Editor’s Note: See related story on pages 13–14.)

Khan is the newest member of Baptist Cardiac Surgery, having joined the group in February 2015. A graduate of New York Medical College in Valhalla, N.Y., he completed his general surgery residency at Christiana Care in Delaware. Khan went on to cardiac surgery training at Maimonides Medical Center in Brooklyn, N.Y. He practiced for eight years in Charleston, W.Va., where he says he benefited from being “exposed to difficult cases and complicated clinical scenarios right from the get go.” The potential to grow the thoracic aorta program and build a transcatheter aortic valve replacement (TAVR) program drew him to Baptist Health.

And Khan’s experience in his first year here has reinforced his decision. “I think the cardiac surgery program here is a rarity in that there truly is a team approach. In the same way we discuss patients with our cardiology colleagues, we discuss most surgical cases amongst ourselves,” he says.

As part of their practice, the surgeons utilize nurse practitioners to help monitor post-op patients in the ICU and step-down unit, as well as see patients in the office, allowing the physicians to be in the operating room. “They provide an excellent extension of what we do,” says Pollock.

The buzz words “minimally invasive” have become ubiquitous across all surgical specialties. But for the cardiac surgeons at Baptist Health, their “less invasive” approach is about much more than small incisions. It also means addressing issues that can prolong a patient’s hospital stay and recovery, such as: avoiding transfusions, pain control protocols, optimizing perfusion techniques, avoiding infections, mobilizing patients sooner, and getting patients off the ventilator sooner.

“When you put that all together, that decrease is a less invasive procedure not only because of the incision but because we decrease the impact of the operation,” says Pagni. As a result, minimally invasive valve repair and replacement patients are able to return to normal activities in about two to four weeks, much quicker than those that receive traditional open heart surgery.

The surgeons take a similar approach to coronary disease. “Interms of coronary disease, not only do we do the standard operations but also we try to simplify and expedite techniques to have better outcomes and have our outcomes be comparable with the top 10 percent nationally,” says Pagni.

For patients who need both aortic or mitral valve repair or replacement and treatment for single vessel coronary artery disease, hybrid procedures can help patients avoid open heart surgery. “Now, in conjunction with the cardiologists, we can work on those patients, one artery can be stented, and then they can have a minimally invasive procedure later on to repair the valve,” says Pollock.

Baptist Health also takes a minimalist approach to blood transfusions, including a bloodless surgery program for patients such as Jehovah’s Witnesses. “Our blood usage is very low compared to the rest of the country. Our blood transfusion rate is around 10 or 12 percent, and the rest of the country may be 30 or 35 percent if you look at the Society of Thoracic Surgeons (STS) numbers for like hospitals,” says Pollock.

The advancements of surgical techniques and tools means that there are more options for patients who used to be told, “There’s nothing more we can do.” According to Khan, “There has been a paradigm shift in terms of who can be operated on and who cannot be and what the appropriate procedure is. The most visible piece of that is the Baptist TAVR program, but that’s really only the tip of the iceberg.”

TAVR or transcatheter aortic valve replacement is FDA-approved for patients in need of aortic valve replacement but who are deemed inoperable or very high risk. Baptist Health launched its TAVR program in March 2015 and has done close to 30 cases. “For the first year, that’s quite good. Twenty-plus cases a year for new programs is what’s considered acceptable. I foresee our program volume being much higher than that,” says Khan.

The proverbial “tip of the iceberg” is the potential inherent in TAVR technology. “The platform we use for this procedure is going to be a springboard for further advances in the field. We want to be at the forefront and be heavily involved in how the future is shaped,” says Khan.

Another treatment paradigm that is changing is that of arrhythmia surgery. When patients with refractory or recurrent arrhythmias have not responded to medical treatment or cardiology interventions to restore normal rhythms, the surgeons can offer surgical solutions, such as the Cox-Maze procedure. Traditionally the procedure required a lot of “cutting and sewing,” says Khan. “Now we use freezing techniques or radiofrequency technology to get the same results with much less trauma to the patient and more expeditiously.”

The TAVR is just one component of a high-volume thoracic aortic surgery program. When Pagni joined the practice, he brought with him a wealth of experience in aortic surgery, which led to the opening of a dedicated Thoracic Aortic Surgery Clinic. The program includes minimally invasive and open procedures for all segments of the aorta in the chest.

Their clinic includes multidisciplinary conferences to discuss all complex valve problems and decide on a course of treatment plan individualized to each patient. Treatment plans also consider the longest term benefits with the lowest impact on the patient. “When it comes to valve disease, we have an emphasis on repairing valves whenever possible. Not all valves are repairable. But we have a repairability rate of over 90 percent for all comers and over 98 percent for patients with degenerative disease,” says Pagni.

When it comes to emergency treatment for conditions such as aortic dissections, the physicians caution that knowing which facilities offer these procedures is critical to survival. “Thirty percent of patients die in the moment of the dissection, and another 30 percent die en route to the hospital, in the operating room, or afterwards,” says Pagni. After the 30 percent initial mortality rate, the rate increases one percent per hour. “Just going to the wrong emergency room can be the difference between life and death,” says Pagni.

Even with the advent of minimally invasive techniques, open heart surgery is still a significant part of any cardiac surgery program. Pollock estimates Baptist’s open heart volumes have increased 10 percent each year since he became employed by the hospital. In 2015, they did approximately 450 open heart cases. With their affiliation with Floyd Memorial, the group did a total of almost 800 hearts last year.

Pollock estimates bypass surgery makes up 50 percent of his practice. “Kentuckians tend to have more diffuse coronary artery disease than I’ve seen in other areas that I’ve practiced in. We have always been a big proponent of complete revascularization for those patients, so our number of bypass grafts tends to be higher than a lot of programs around the country,” he says.

One benchmark in bypass surgery is the use of internal mammary arteries. “We see a lot of patients 20 or 30 years later that their vein grafts have occluded just because of progression of the disease, but the mammary arteries are open. That’s the reason we use the mammary artery on the main artery at the front of the heart and are trying to use more arteries, especially in younger folks,” says Pollock.

Regardless of the type of procedure or the technology the future brings, collaboration will continue to be key. “When I was growing up in the Trover Clinic, there were about 100 physicians and everybody worked together for a common goal to take care of the patients. I think what we have here is as close to that as I’ve seen anywhere. I think within the cardiology and cardiac surgery group here at Baptist that collegial atmosphere really benefits the patients,” says Pollock.

With that mindset, their comprehensive skills, and careful patient selection and treatment personalization, Baptist Cardiac Surgery is poised to be a leader in cardiac care.