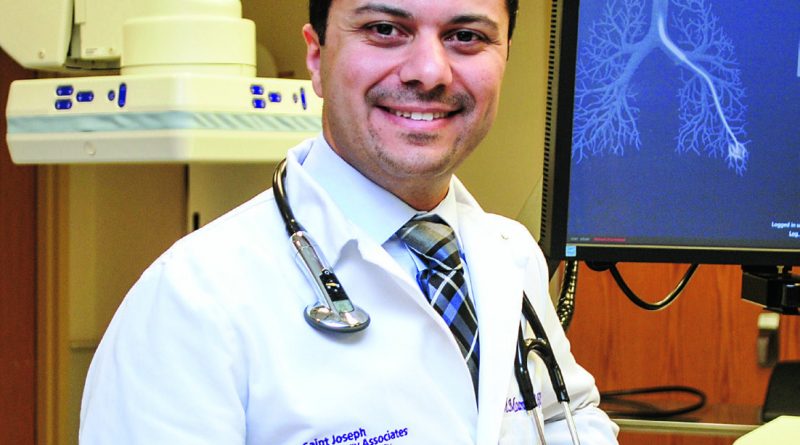 LEXINGTON They say you should fight the battles you can win. Until recently, fighting pulmonary hypertension was essentially fighting a losing battle. There were few treatments, few opportunities for success. But times have changed, says Mahmoud Moammar, MD, of KentuckyOne Health Pulmonary Associates at Saint Joseph East in Lexington.

“They used to say there’s no treatment for it, so why should we go through this series of tests,” Moammar says. “Now there is a treatment for this disease, and we can do something for the patients to improve their quality of life.”

The lack of treatment options in the past and subsequent hesitancy to test for pulmonary hypertension has led to under-diagnosis and late diagnosis, Moammar says.

If Moammar sounds passionate about treatment of pulmonary hypertension, it’s because he is. He began his medical journey by attending Jordan University of Technology and Science in Jordan. He completed his residency at Mt. Sinai School of Medicine in New York and his pulmonary fellowship at Seton Hall in New Jersey.

It was during his residency that he became interested in pulmonary disorders. “During my rotation in the ICU, you see those sick patients that need your help,” he says. “The impact that you have on those patients is huge. The happiness that you feel there after they leave the ICU and they go back to their normal life … you can’t explain it.”

That desire to help patients led him to Kentucky, where the prevalence of smoking results in a high incidence of lung disorders. He practiced in Ashland for three years before moving to Lexington in 2012.

Now in his fourth year at KentuckyOne Health Pulmonary Associates, Moammar was named 2015 Physician of the Year at Saint Joseph East by Saint Joseph Foundation. He and his colleagues see a wide variety of diseases related to the lungs, including asthma, COPD, lung nodules, and pulmonary hypertension.

“About a year ago, we started a center here at Saint Joseph East to treat patients with pulmonary hypertension,” Moammar says. “We work with our colleagues from cardiology and rheumatology to have a multidisciplinary approach to treat the disease. We’ve been very successful in making a change in patients’ lives.”

Moammar points to advancements in treatment for pulmonary hypertension as the reason for the increased importance in early and accurate diagnosis. “In the last 10 years, we came from maybe one or two medicines available in the market to 14 medicines,” he says. “Before, we were doing intravenous and subcutaneous therapy. Now we have other options like oral and inhaled therapies that can help patients and have a large impact on their lives.”

Advances in diagnostics have also made the disease easier to identify. If an echocardiogram reveals increased pressure, a right heart catheterization can serve as a diagnostic approach for pulmonary hypertension.

KentuckyOne Health Pulmonary Associates stresses a multidisciplinary approach. The result of these advanced diagnostics and treatments is the ability to improve a patient’s quality of life, Moammar says. “When you diagnose patients with pulmonary hypertension, you have to look at their functional status,” he says. “If they have significant shortness of breath, your target is going to be to push them back to where they have no shortness of breath or have shortness of breath only during extreme exertion.”

To help patients get back to and maintain a high level of functionality, Moammar and his colleagues have an extensive follow-up care program. “Once you have a patient with pulmonary hypertension, I always say you get married to that patient,” Moammar says. “You have a long-term relationship with them. You have follow-up tests to see if the pressure is going down and a six-minute walk test to see if their functional status is improving. We perform those tests in three-to six-month intervals based on patients’ needs.”

In addition to the advances in pulmonary hypertension diagnosis and treatment, Moammar is excited about the technology that now allows for earlier detection and treatment of cancerous lung nodules. KentuckyOne Health Pulmonary Associates launched a program for early detection and early screening for patients with lung cancer. Any patient who meets eligibility criteria can have the Low Dose Chest CT scan that will help with early detection of lung cancer.

They also started a lung nodule clinic, which employs an advanced technology for faster, more accurate diagnosis. “We started an interventional pulmonary program with advanced technologies including navigational bronchoscopy, which is a kind of bronchoscope which can go further in the lung and diagnose lung nodules that we were unable to reach without it,” Moammar says. “We also brought endobronchial ultrasonography, which is used not only to diagnose the cancer but also to provide staging at the same time. That saves the patient major surgery and major complications later.”

KentuckyOne Health Pulmonary Associates and their patients are fighting serious battles every day. And with advancements in technology, diagnosis, and treatments, they are battles they can win.

“We have to think of pulmonary hypertension as a disease, and there’s a treatment for it.”– Dr. Mahmoud Moammar