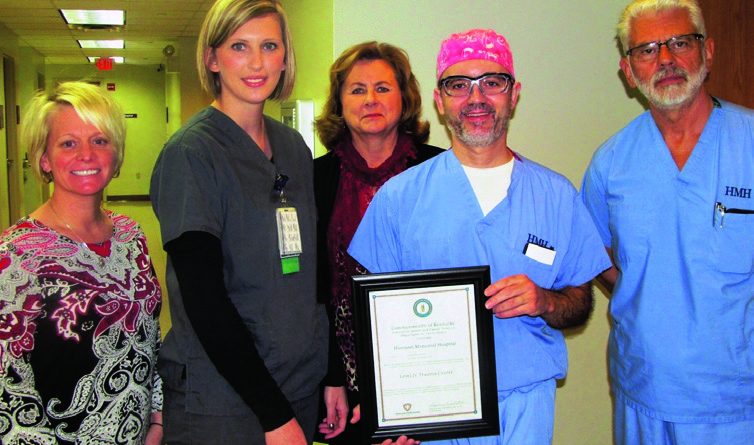 LOUISVILLE Salvatore J. Bertolone, Jr., MD, professor and previous chief of pediatric oncology and hematology at the University of Louisville, received the third annual Marc A. Lehmann Spirit of Service Award for physicians on Oct. 30. The award recognizes Louisville-area physicians in hematology & oncology and is presented in memory of Marc A. Lehmann, a Louisville native and U of L student who succumbed to acute myeloid leukemia in 2012.

The Marc A. Lehmann Spirit of Service Award Foundation endeavors to seek out and identify physicians and support staff in the field of blood cancers and hematology to honor longstanding service to patients and their families that encompasses exceptional proficiency, empathy, and understanding. Each year the foundation presents an award to one physician and to three support staff members from the Greater Louisville area.

“We congratulate Roberto for achieving this award. He is such a scientist,” said Thomas Ryan, MD, director of The Ohio State Heart and Vascular Center. “His work on heart muscle protection and regeneration has greatly increased our understanding of the cellular changes that occur during a heart attack and how to minimize and repair the damage that results.”

The Schottenstein Prize was established in 2008 with a $2 million gift from Jay and Jeanie Schottenstein for an endowed fund for a biennial award. The prize goes to a physician or researcher who is an international leader in cardiovascular medicine, cardiothoracic surgery, or molecular or cellular cardiology. Bolli received his award during a ceremony on Nov. 4 in Columbus, Ohio. The prize includes an honorarium of $100,000.

Bolli is the Jewish Hospital Heart & Lung Institute Distinguished Chair in Cardiology and serves as director of U of L’s Institute of Molecular Cardiology, scientific director of the Cardiovascular Innovation Institute, and executive vice chair in the Department of Medicine.

Casey Named U of L Chair of Psychiatry, Behavioral Sciences

LOUISVILLE David A. Casey, MD, has been named chair of the Department of Psychiatry and Behavioral Sciences at the University of Louisville School of Medicine. He has served as interim chair since Jan. 1.

Casey’s appointment was approved by the U of L Board of Trustees at its Oct. 8 meeting.

Hattab Appointed U of L Chair for Pathology

Hattab is currently the vice chair of education for pathology and laboratory medicine at Indiana University and serves as the director of the residency program. He joined Indiana University in 2002 and has risen through the ranks during the past 13 years.

Daniel T. Jackson, MD, is serving in the Capitol Hill office of U.S. Rep. James McDermott, MD, (D-Wash.) for the 10 months of the fellowship beginning in September. The award is offered to only one individual each year and provides the opportunity to represent the profession of psychiatry in Congress, working with federal policy makers to shape public policy.

LEXINGTON Dr. Barbara Phillips, professor of pulmonary, critical care, and sleep medicine in the Department of Internal Medicine at the University of Kentucky, was elected the 78th president of The American College of Chest Physicians (CHEST) effective Nov. 1, 2015.

NEW ALBANY, INDIANA The Indiana Athletic Trainers Association’s fall meeting was held Sunday, November 1, and Floyd Memorial emergency medicine and sports medicine physician, Stan Schooler, MD, was selected as the recipient of the Indiana State Medical Association’s Committee on Sports Medicine’s 2015 Team Physician of the Year Award. This award is granted to a physician who has provided significant long-term contributions and support to the field of sports medicine.

CYNTHIANA Harrison Memorial Hospital (HMH) announced it is officially designated as a Level IV Trauma Center by the Kentucky Trauma System and verified by the Commonwealth of Kentucky Cabinet for Health and Family Services Department of Public Health. The designation was presented at the 2015 Kentucky Trauma and Emergency Medicine Symposium on November 5.

As a Level IV Trauma Center, HMH has the ability to provide initial care and stabilization of traumatic injuries while arranging transfer to a higher level of trauma care. The goal is to ensure that the trauma patient is treated within the “golden hour” of injury. Using the standards set forth by the state and having pre-arranged transfer agreements with several Level I Trauma Centers, HMH ensures that the patient receives proper trauma care in a timely manner. The process of applying to the program began in 2014. HMH established a trauma program under the leadership of Christina Buckler, HMH Emergency Department manager. The program includes several physician and management leaders along with local emergency management services.

DANVILLE Ephraim McDowell Regional Medical Center, as part of its Heart & Vascular Program, is the first hospital in Kentucky to acquire and use a new and innovative tool to treat patients with peripheral artery disease (PAD).

With the acquisition of the FDA-approved Ocelot Optical Coherence Tomography (OCT), EMRMC is taking a large step forward in the treatment of patients with PAD, an under-recognized epidemic that affects between eight and 12 million adults in the U.S. and 202 million people globally. PAD is caused by a build-up of plaque in the arteries that blocks blood flow to the legs and feet.

The innovative technology allows physicians, for the first time ever, to see from inside the artery during a procedure, using optical coherence tomography (OCT) to navigate through the vessel. In the past, physicians have had to rely solely on x-ray as well as touch and/or feel to guide catheters through complicated blockages. With the recently developed lumivascular approach, physicians can more accurately navigate through chronic total occlusions (CTO), a complete blockage of an artery, thanks to the OCT images they see from inside the artery.

Ocelot is the first-ever CTO-crossing catheter that uses OCT technology to access exact regions of the peripheral vasculature where the blockages occur, while simultaneously providing Ephraim McDowell’s physicians with visualization for real-time navigation during an intervention.