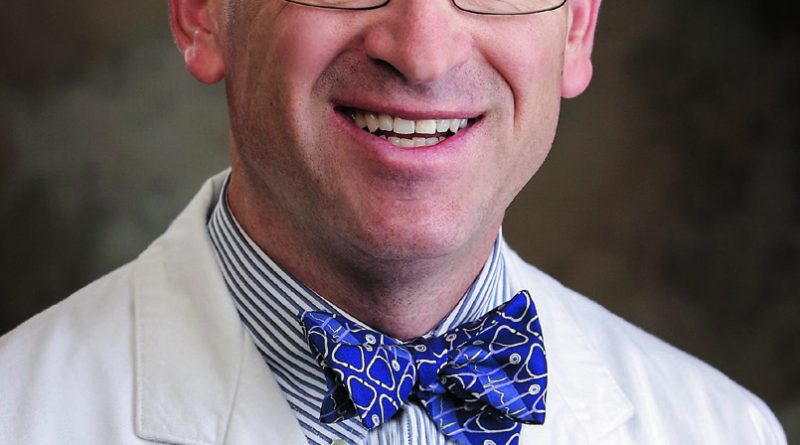 OWENSBORO For Christopher Glaser, MD, FACS, general surgeon with Owensboro Health’s One Health Surgical Specialists the decision to become a surgeon was all about being able to fix his patients’ ailments, not just treat them.

“Surgery is the only medical specialty we have where we actually cure people of their diseases,” says Glaser. “If a patient has diabetes, you can put him on insulin but he still has diabetes. But if someone has a bad appendix, you take the appendix out, and they are cured.”

A native of Louisville, Glaser attended the University of Louisville School of Medicine and completed his residency at the Medical College of Wisconsin. He was offered a position in Owensboro in 1993 and has practiced there ever since. He and his wife of 32 years have three grown children and love being part of the Owensboro community where Glaser practices as part of a nine-person general surgery group. “We do everything except brains, bones, and the heart,” Glaser says of his team. “Everybody has their own niche that they really like. Breast surgery is my niche, and approximately half of my practice is breast surgery.”

Advancements in breast surgery have not only improved patient outcomes, but also have helped reduce the scars – both physical and emotional – that such surgeries can leave behind. “When I was a medical student, there were only two procedures – a biopsy and a mastectomy,” Glaser says. “Now there’s always something better, and I find that very attractive.”

Gone are the days when a cancerous lump in a woman’s breast meant an automatic mastectomy. Today chemotherapy is often used to reduce the size of a tumor prior to surgery, and advances in oncoplastic surgery and radiation therapy are improving the efficacy and aesthetic outcomes of breast preservation techniques. “When a woman has breast cancer, she shouldn’t fear what she’s going to look like after treatment. That’s the glory of oncoplastic surgery,” says Glaser. When Glaser started at Owensboro, there were not any plastic surgeons in town, so patients had to leave Owensboro for breast reconstruction. That led Glaser to seek plastic surgery training at a course in Dallas, Texas, where he learned oncoplastic techniques.

Oncoplastic surgery is the combination of plastic surgery reconstructive techniques with surgical oncology. Besides the aesthetic appeal, oncoplasty give surgeons the ability to resect wider margins. “The most important thing in surgical breast cancer is making sure you get a margin of normal breast tissue around the tumor,” Glaser says. “If you’re taking out a large amount of that breast tissue, you can imagine what it’s going to look like when you’re done. But using the oncoplastic approach, you can move tissue to fill that void, and you don’t have to be so conservative with your margins. When you have good margins, you have fewer problems with infection, pain, deformity, and recurrence.” And better margins during the initial surgery translates to better outcomes for patients.

After the surgical removal of a tumor, radiation oncologists often give a boost of radiation to the area that housed the tumor. However, in the past, it was difficult to accurately judge where and how large that area was. “Before, the natural thing was to broaden the radiation treatment to make sure they got it all. The problem with that is the more volume you treat, the worse the deformity of the breast,” says Glaser.

Now, surgeons at Owensboro Health use BioZorb™, a three-dimensional tissue marker, to pinpoint the tumor’s precise location. A small spirallike device made of the same material used to make dissolvable stitches and embedded with eight titanium clips, BioZorb is sewn into the breast cavity vacated by the tumor to accurately mark its location.

Glaser and the radiation group performed a study, examining 12 cases prior to use of the BioZorb. “We discovered the average decrease in treatment volumes with the marker was three and a half times less breast volume,” he says.

Resecting tumors, while preserving breast volume and appearance? Now that goes a long way toward fixing the patient’s problem, not just treating it.