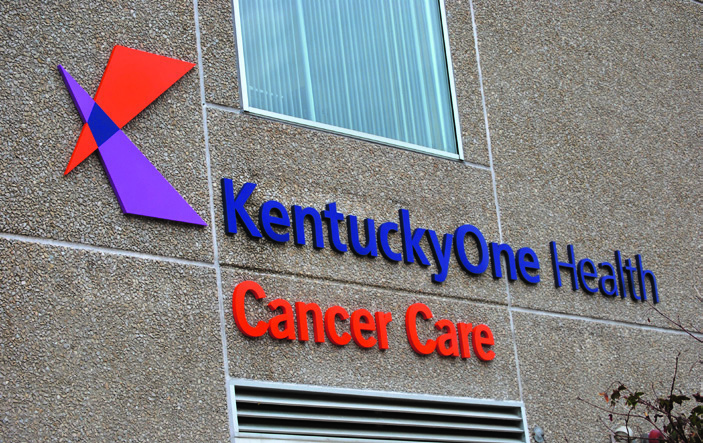 LEXINGTON “It’s like using a scalpel instead of a machete.”

We are used to seeing medical breakthroughs make a major splash, but sometimes the history and perception of a particular disease is so pervasive that public awareness changes slowly, even when it is a major change.

Such a change has come in oncology, says Jessica Moss, MD, of KentuckyOne Health Hematology and Oncology Associates. She says that targeted drugs have changed cancer treatment, drastically reducing the negative impacts that often came with chemotherapy – leading to her machete vs. scalpel analogy.

“Some of the biggest challenges are dealing with misconceptions from both patients and other physicians about what we can do for various cancers,” Moss says. “In some cancers, the prognosis is so much better than it used to be because of targeted drugs.”

And when she says “used to be,” Moss isn’t talking about 30 or 40 years ago. She’s referring to changes she’s seen just in the past decade since her graduation from University of Louisville Medical School in 2005.

Moss performed her residency at Vanderbilt, intending to specialize in gastroenterology. But due to her experiences in her oncology rotations, she switched to oncology. She did a hematology/oncology fellowship at the University of Kentucky before joining KentuckyOne Health as a hematologist/oncologist.

Moss and Dr. Jessica Croley, who completed their fellowship together, decided to open a joint practice – KentuckyOne Health Hematology and Oncology Associates. It is a “small community practice” that operates under the KentuckyOne Cancer Center umbrella.

“With my cancer patients, I’m always up front with them about whether this is a cancer we can cure or a cancer we can treat,” Moss says. “Just because a cancer is not curable doesn’t mean we can’t treat it.”

Moss recently returned from the first annual meeting on hematologic malignancies by the American Society of Hematology. A prominent discussion topic was the development of even more targeted agents that are offering an alternative to chemotherapy.

Traditional chemotherapy is designed to attack cells that are replicating, which also goes on in some normal cells such as those found in hair follicles, the inside of the mouth, gastrointestinal tract, and bone marrow. That accounts for the toxicity of chemotherapy causing patients to lose their hair and experience nausea, vomiting, and diarrhea.

“What we have now are drugs that are targeted against proteins that can be expressed either on the surface of cancer cells or within the cell as part of the signaling process that gives the signal to grow and divide and act abnormally,” Moss says.

One example of these targeted drugs is ibrutinib. It is an oral drug that is targeted against a protein within that cell-signaling process called bruton tyrosine kinase.

“Nobody expects it to be a cure, but people are living much longer and with much less toxicity than they ever did with what would have been our second line chemotherapy agent,” Moss says. “In one patient, if we didn’t have this drug, I would be having hospice conversations with him. But now I can help him and get him back to his baseline quality of life.”

Similarly, myeloma prognosis and survival are much better thanks to relatively new drugs. Moss tells of a patient who had fractured several of his vertebrae due to the myeloma destroying his bones. Treatment included radiation, steroids, and two drugs that have just come into use in the last decade – bortezomib and lenalidomide.

“One of the doctors rounding on him at that time told him that he would be dead within a year,” Moss says. “This was over two years ago. That man has gone into complete remission. Initially, he and his wife didn’t want to go through this ‘toxic’ treatment since they were told he would be dead. I had to do damage control and say ‘no, really, we have better treatments now.’ But if you haven’t been in the oncology field, you haven’t seen that necessarily.”

A death sentence isn’t the only misconception that comes with a cancer diagnosis. Another is how sick the treatments will make you. While the targeted drugs are much less toxic, the supportive care drugs are also much more effective against nausea, vomiting, and infection.

“I tell people, if you have vomiting, I’ve failed,” Moss says. “I expect you to have a functional independent life. If your quality of life is so poor that I’m doing more damage by the treatment than the cancer would have done to you, then I’m not doing the right thing.”

Patients aren’t the only ones with misconceptions about cancer treatments and prognosis. Physicians see oncologists like Moss in the hospitals treating the sickest of the sick, but not the ones that come to her clinic every day.

“It’s easy for other doctors to think all oncology patients are like those in the hospital, but that is less than 10 percent of my patient population,” Moss says. “Most of my patients will either be cured or will live for years, maybe even decades with their diagnosis.”

Myeloma is a cancer of plasma cells. Plasma cells are differentiated B cells that have gone on to make antibodies. Normal plasma cells make antibodies. “Part of how a myeloma causes problems is that it produces too much of an abnormal protein, and it secretes it. And that protein goes on to cause kidney problems and bone problems,” says Jessica Moss, MD, hematologist/ oncologist. “Both of these are liquid cancers. They can go wherever blood cells go. It’s not something we can cut out and be rid of.” Moss says targeted drugs such as bortezomib, ibrutinib, lenalidomide, and rituximab are beneficial in treatment of lymphoma and myeloma. By targeting the specific cells involved in the growth, progression, and spread of cancer, they are offering significantly better prognosis and less toxicity to the patient.