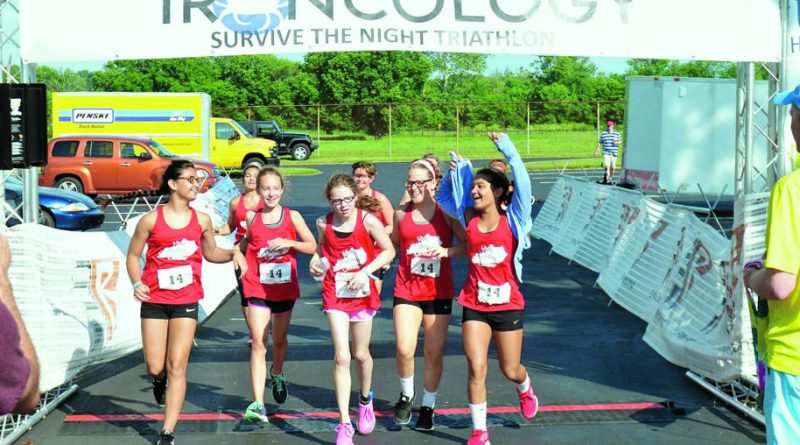 LEXINGTON This has honestly been a very busy year. When I originally created Ironcology, it was simply an idea of racing in Ironman Louisville with a goal of raising $200,000 to guarantee some much needed equipment upgrades at the cancer center. After I was able to raise $54,000 in this first race, I felt responsible for maintaining the momentum. By the end of the 2014 calendar year, I had raced a total of four Ironman competitions while maintaining a blog, and I had raised $141,000.

The most rewarding aspect for me since starting my Ironcology campaign has been the community support and feedback. In addition to the tremendous influx of donations made by friends, family members, patients, and others from the community, I have also made many new friends and collaborators this past year who tell me they are inspired and wish to help with my cause. I have formed my own “Ironcology Team,” initially comprised of only four people, but growing. Ironcology is now a recognized fundraising organization. We have a new website, Ironcology.org, and in addition to blogging and using long distance triathlons to fundraise, we have even branched into holding our own event.

In June, my small Ironcology team pulled off the first ever overnight Ironman-distance triathlon relay that we called “Survive the Night.” This was an overnight team relay where teams completed a full distance triathlon, 140.7 miles, but could divide the distances up between 10 team members. The race was held between Spindletop Hall and the Kentucky Horse Park. We had 27 teams complete the distance, and this was combined with an exercise event with our vision titled “The Healthiest Weekend in Lexington.” The goal was to raise cancer awareness while promoting a healthy lifestyle, and netted $27,000.

The current total that I have raised through Ironcology is $174,511. Although I am still short of my original goal, I anticipate we will have surpassed $200,000 before the middle of October 2015. I will be racing Ironman Louisville again on October 11, and I have been very fortunate to have earned a few local sponsorships with Big Ass Solutions, Audi of Lexington, SWORD performance drink, and CGS automation, who have each been trying to help me reach my goal. UK HealthCare has similarly been very supportive as my brachytherapy suite has already been approved for the remaining funds, and we are currently in the design process, with an anticipated completion by the end of spring 2016.

The big picture for Ironcology is that it’s here to stay, at least for now. Once I reach my goal for the brachytherapy suite, I am simply going to shift my focus to begin fundraising for whatever is needed at the cancer center. My next fundraising goal will be to support some of the innovative clinical trials written by UK physicians who are need of grant support. Very soon I will have to begin planning for next year’s Survive the Night triathlon, but this time I will be joining forces with the Lexington Cancer Foundation to add their Roll for the Cure bike event, so we can truly create a much larger event combining a healthy lifestyle and cancer awareness.

It’s been a busy year, but it has all been worth it. To learn more, visit Ironcology.org.

EDITOR’S NOTE: Ironcology is the name created by Dr. Jonathan Feddock, radiation oncologist at UK HealthCare and the Markey Cancer Center. Feddock created “Ironcology” in 2014 to raise awareness and funds for a new brachytherapy suite at UK. Feddock and Ironcology were first profiled by MD-Update in Issue #84, October 2014.