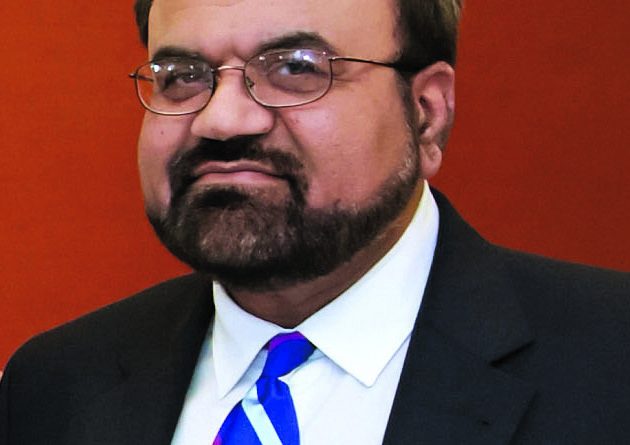 LOUISVILLE Aplastic anemia is a complex, relatively rare disease of the hematopoietic stem cells in the bone marrow, according to Khuda Khan, MD, PhD. Khan came to the United States on a scholarship and received a PhD in immunology from Yale before completing his residency and fellowship at Duke. In his position as a hematology and oncology specialist at KentuckyOne Health in Louisville, he translates his scientific knowledge of the immune system into treatment therapies for complex disorders, such as aplastic anemia. “This is a challenging area in medicine with many new immunotherapies in clinical research and clinical practice,” says Khan, who sees adult patients ages 18 and above.

“Aplastic anemia is a misnomer,” says Khan. “It’s really pancytopenia where all three hematopoietic stem cell lines are decreased – red blood cells, white blood cells, and platelets.” According to Khan, it occurs with an incidence of two-to-four cases per million population each year. Severity of aplastic anemia can range from moderate to very severe and can occur throughout the lifespan. He states that moderate aplastic anemia may not require treatment, whereas severe to very severe disease has a mortality rate of 70 percent within one year if not treated. “Patients with a neutrophil count of less than 500 and a platelet count of less than 20,000 require treatment to survive as they are at high risk for overwhelming infections and spontaneous bleeding,” notes Khan.

Close to 50 percent of aplastic anemia cases are idiopathic, but it can be caused by exposure to certain chemicals, drugs, radiation, infection, and immune disease. “There is a post viral hepatitis aplastic anemia that predominately occurs in young boys. The hepatitis virus triggers the immune system to attack the hematopoietic stem cells,” states Khan. He reports that primary care providers are quick to refer to hematology specialists when they see a patient with pancytopenia, but there can be variants that affect only one or two stem cell lines. Khan gives the example of red cell aplasia caused by the parvovirus, which affects the red cell progenitors in the bone marrow. Those patients present with a decreased red blood cell count, while white blood cell and platelet counts are normal. He emphasizes, “A bone marrow biopsy is necessary for definitive diagnosis. With aplastic anemia, bone marrow activity is less than 25 percent of normal, whereas, leukemia with aplastic presentation shows a high rate of bone marrow activity.”

Treating this complex syndrome requires a patient-specific approach depending on the severity of the disease and the patient’s age. “When we first see a patient, they often need supportive care, such as blood and platelet transfusions and antibiotics,” Khan states. Patients may present with symptoms of severe anemia, platelet dysfunction, and infections. Supportive care is a short-term fix as patients develop antibodies to blood transfusions, notes Khan. He adds, “Intravenous access is challenging due to risks of central line placement in patients with decreased platelets and immune function.”

“Immunosuppressive therapy is used for older patients and patients with no suitable donor. This is a three-drug combo using horse antithymocyte globulin (ATG), high dose steroids, and cyclosporine. Horse ATG is developed by injecting human B cells into the horse, which then makes antibodies against the human B cells. These potent drugs, which can have significant side effects, have a response rate of around 60 percent. Survival for elderly patients with aplastic anemia is less than 50 percent usually due to co-morbidities such as hypertension that increase the risk of sequelae such as spontaneous cerebral hemorrhage,” says Khan.

“Aplastic anemia is a chronic disease and treatment can take months. All this takes an emotional toll on patients and families,” notes Khan. Those patients experience fatigue, bruising, and infections and are subjected to frequent medical appointments, blood draws, etc. “Sometimes patients/families think it’s just an anemia, but the prognosis is just as bad as lung cancer,” adds Khan. With their permission, Khan will match up patients to provide emotional support for each other. In addition, the Aplastic Anemia and MDS International Foundation or other hematology or oncology support groups can serve as resources for patients and families.

There are several new developments in the treatment of aplastic anemia. “Improvements in bone marrow transplant include better antifungal medications to treat potentially fatal infections such as Aspergillus,” he states. The new drug Eltrombopag was recently approved by the FDA for non-responders to immunosuppressive therapy, especially patients with low platelets. Bone marrow donor registries are helping to find donors for patients without a sibling donor, and donor drives are improving the chances of finding a match for minority patients. Khan says in summary, “Aplastic anemia is a serious condition with effective therapy. There is hope and we continue to make progress.”

Sometimes people think it’s just an anemia, but the prognosis is just as bad as lung cancer.