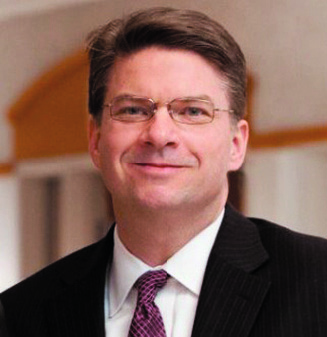 Freeman will join colleagues Derek Clarke, MD, and Gerald Harpel, MD, in providing full-service care and coverage for women in the surrounding area. She will deliver newborns at Harrison Memorial Hospital as well.

Freeman began seeing new patients in June. Her office is located in the HMH Professional Arts Building in Suite G4.

LOUISVILLE The University of Louisville Board of Trustees has named Jeffrey “Jeff” Bumpous, MD, chair of the newest department in the UofL School of Medicine, the Department of Otolaryngology-Head and Neck Surgery and Communicative Disorders. Bumpous was named chair at the board’s meeting on June 4.

The board established the new department at its May 14 meeting by elevating the program from two divisions within the Department of Surgery in a move that strengthens the provision of clinical care to patients and education and training to future physicians as well as audiologists and speech pathologists. At UofL, otolaryngologists practice with University of Louisville Physicians-Ear, Nose and Throat. Communicative disorders professionals practice with UofL Physicians-Hearing & Balance and UofL Physicians-Speech Pathology.

Bumpous is the J. Samuel Bumgardner Professor of Otolaryngologic Surgery and chief of the former Division of Otolaryngology in the Department of Surgery. He has been at UofL since 1994 and leads a multidisciplinary team of healthcare providers in treating cancers of the head and neck. These include cancers of the mouth, larynx (voice box), pharynx (throat), nasal cavity, sinuses, salivary glands, and thyroid gland.

Bumpous currently is president of the Society of University Otolaryngologists and a member of the Board of Directors of the American Board of Otolaryngology. He is board-certified in otolaryngology and is lead or co-author of more than 60 journal articles and scientific book chapters.

LOUISVILLE University of Louisville Family and Geriatric Medicine Chair Diane M. Harper, MD, MPH, MS, has been selected as a member of the 2015–2016 class of the Hedwig van Ameringen Executive Leadership in Academic Medicine (ELAM) Program. Harper is one of only 54 women in the nation selected for the program.

ELAM is a year-long fellowship for women faculty in schools of medicine, dentistry, and public health. The program develops professional and personal skills required for leadership and management in health care. More than 800 ELAM alumnae hold leadership positions in institutions around the world.

Harper was named the Rowntree Endowed Chair and professor in the Department of Family and Geriatric Medicine at the UofL School of Medicine in 2013. She is an award-winning clinician, educator, and researcher with a background in family medicine, obstetrics and gynecology, epidemiology, and biostatistics, as well as chemical engineering.

Harper was the U.S. principal investigator who designed the global trials to understand the efficacy of both of the prophylactic human papillomavirus (HPV) vaccines to control cervical cancer. She was a lead author in multiple Lancet publications, New England Journal of Medicine, and JAMA, and co-author of more than 140 additional articles on cervical cancer prevention. She also has consulted for and published with the World Health Organization on the use of prophylactic HPV vaccines. Harper is a member of the NIH’s Population Sciences and Epidemiology Integrated Review Group of the Epidemiology of Cancer Study Section, as well as the Center for Disease Control and Prevention’s Special Emphasis Panel on HPV Vaccine Impact among Men who have Sex with Men (MSM) and Serosorting and Other Seroadaptive Behaviors Among Men Who Have Sex With Men (MSM) in the US.

In ELAM’s 20-year history, 16 faculty members from UofL have completed the fellowship, including UofL School of Medicine Dean, Toni M. Ganzel, MD, MBA, who participated in 2003–2004.

LOUISVILLE A single dose of the human papillomavirus (HPV) vaccine Cervarix appears to be as effective in preventing certain HPV infections as three doses, the currently recommended course of vaccination. That is the conclusion of a study published in The Lancet Oncology and co-authored by Diane Harper, MD, PhD, the Rowntree Endowed Chair and professor in the Department of Family and Geriatric Medicine at the University of Louisville School of Medicine.

The analysis determined the protection from one dose is similar to that achieved by three doses of the vaccine.

“These exciting findings address the fact that nearly two-thirds of people who get HPV vaccines do not get all three doses in a timely manner,” said Harper, who was a principal investigator in one of the trials included in the analysis. “Knowing that Cervarix offers protection in one dose reassures public health agencies that they are not wasting money when most of their vaccines are given to those who never complete the three-dose series.”

The study is published in The Lancet Oncology with the title, “Efficacy of Fewer than Three Doses of a HPV-16/18 AS04 adjuvanted Vaccine: a Meta Analysis of Data from the Costa Rica Vaccine Trial and the PATRICIA Trial.”

LOUISVILLE It’s a new weapon in the arsenal of cancer fighting treatments: utilizing genetically modified viruses to invade cancer cells and destroy them from the inside.

University of Louisville researcher Jason Chesney, MD, PhD, deputy director of the James Graham Brown Cancer Center (JGBCC), and a team of international scientists found that stage IIIb to IV melanoma patients treated with a modified cold sore (herpes) virus had improved survival. The results of the findings were published recently in the Journal of Clinical Oncology.

UofL was one of the major sites for the phase III clinical trial involving 436 patients who received the viral immunotherapy, talimogene laherparepvec (T-VEC). Scientists genetically engineered the herpes simplex I virus to be non-pathogenic, cancer-killing, and immune-stimulating. The modified herpes virus does not harm healthy cells, but replicates when injected into lesions or tumors, and then stimulates the body’s immune system to fight the cancer.

“The results from this study are amazing,” Chesney said. “Patients given T-VEC at an early stage survived about 20 months longer than patients given a different type of treatment. For some, the therapy has lengthened their survival by years.”

The U.S. Food and Drug Administration (FDA) and the European Medicines Agency (EMA) are considering findings from the trial to make the treatments available to more patients with advanced melanoma.

Psychiatrist recognized for work on worldview in clinical psychiatry

LOUISVILLE In recognition of his work on understanding the importance of both the patient’s and the clinician’s worldview in clinical psychiatry, Allan Josephson, MD, chief of child and adolescent psychiatry and psychology in the University of Louisville Department of Pediatrics, will be the 2015 recipient of the Oskar Pfister Award from the American Psychiatric Association.

This award recognizes individuals who have made professional contributions to the interfaces of psychiatry, religion, and spirituality in research and clinical practice.

For more than a decade, Josephson coordinated workshops, symposia, and lectures on religion, spirituality, and psychiatry at the annual meetings of the American Psychiatric Association. These events resulted in several publications, including the “Handbook of Spirituality and Worldview in Clinical Practice,” co-edited by Josephson and John Peteet, MD, of Harvard Medical School. The work is now used in the teaching programs of many psychiatry residencies throughout the country.

LOUISVILLE Whitney Ann Nash, PhD, MSN, ANP-BC, associate dean of practice and service for the University of Louisville School of Nursing, has been elected to serve as the Kentucky representative for the American Association of Nurse Practitioners. She will begin a two-year term following the Annual Membership meeting of the AANP National Conference on June 13 in New Orleans.

In her role, Nash will serve as a liaison for AANP members and other nurse practitioners at state and local events.

In 2005, Nash helped establish the Kentucky Racing Health Services Center, an award-winning, nurse-practitioner-directed clinic providing healthcare for racetrack workers. She has lead the center since its opening.

Prior to her appointment as associate dean in 2014, Nash was the director of practice and international affairs at UofL and has attended more than 20 international programs and medical service trips.

Nash, a 2014–15 Duke-Johnson and Johnson Nurse Leadership Fellow, has been a member of the nursing faculty at UofL for more than 10 years and has been an adult nurse practitioner since 1997. She has numerous publications, presentations and research projects to her credit, including a grant from the Department of Health and Human Services, Health Resources Services Administration for a project to enhance interprofessional practice between nursing and dental students. In 2011, she developed a web-based career networking site to connect UofL nursing students and alumni to career opportunities.

LEXINGTON Dorothy Lockhart, RN, has been hired as the regional director for the KentuckyOne Health Partners Lexington market.

Prior to joining KentuckyOne Health Partners, Lockhart served as director of cardiothoracic transplant and mechanical circulatory support at the University of Kentucky. Prior to that, she worked in the organ transplant programs at UCLA and Cedars Sinai.

In addition, she coordinated an interdisciplinary medical care delivery system for transplant patients, starting with receiving organ donor offers from organ procurement agencies, all the way through providing individualized patient and family teaching, and coordinating all team members in the event of a transplant.

Lockhart is a member of the International Society of Heart and Lung Transplantation and the American Society of Transplantation. She is the co-author of a number of scientific papers about organ transplantation, and has given presentations across the nation on that subject. She is a board member of Kentucky Trust for Life and a proponent of organ donation and awareness.

LONDON KentuckyOne Health has named Terrence G. Deis as the new president of Saint Joseph London. He assumed the role on June 1, 2015.

Deis has more than 20 years of diverse hospital management experience, including financial, operational, technical, and strategic leadership. He most recently served as president and chief executive officer of UH Parma Medical Center, a 332-bed acute care facility with 2,000 employees located in Parma, Ohio.

Deis is a certified public accountant and a fellow of the American College of Healthcare Executives. He holds a bachelor’s degree in accounting from Bowling Green State University, and a master’s in business administration from Cleveland State University.

LOUISVILLE The Greater Louisville Medical Society Presidents’ Celebration was held on May 31 in the Muhammad Ali Center. Robert (Bob) Couch, MD, MBA, was installed as the new GLMS President for 2015–2016.

The Greater Louisville Medical Society (www.glms.org) is a professional organization of 3,800 physicians and medical students who advocate for the health and well-being of the community and strive to protect the patient-physician relationship. Over 80 percent of practicing physicians in Louisville are GLMS members. Louisville Medicine is the medical society’s monthly journal.

NEW ALBANY, IN Mohammad E. Majd, MD, a Floyd Memorial Medical Group – Orthopedics surgeon who performs surgery at the Floyd Memorial Spine Center, is the first orthopedic/spine surgeon in the Kentuckiana region to successfully perform cervical spine surgery on patients with two-level (more than one affected adjoining disc) artificial disc replacement using the Mobi-C device, which was recently approved by the FDA. It is the only device approved for two-level disc indications. Majd explained, “The Mobi-C device is ideal for qualifying younger patients who desire a greater range of motion that traditional fusion surgery, with a titanium plate, would not provide. Patients are able to go back to normal activities that were limited by severe neck pain caused by a ruptured disc, pinched nerve, spinal cord pressure, or bone spurs.”