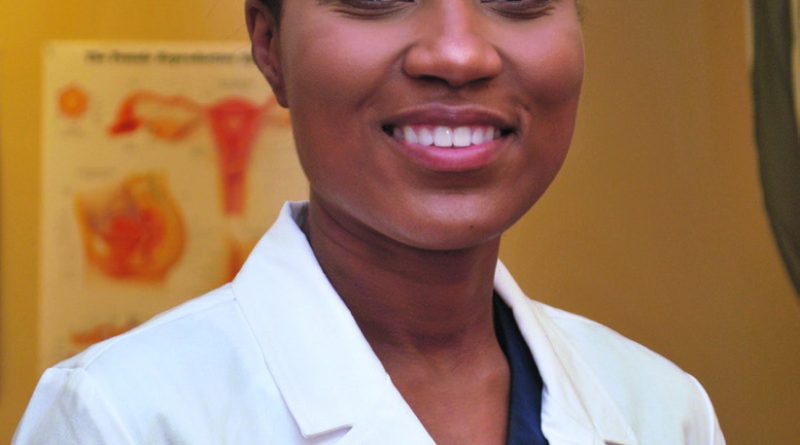 LEXINGTON When you go to visit Avis Carr, MD, at KentuckyOne Health Obstetrics and Gynecology Associates in Lexington, don’t expect to see her wearing pink.

“On TV shows like ‘Grey’s Anatomy,’ the OB/GYNs get a bad rap,” Carr laughs. “They don’t even give them cool colored scrubs. They have to wear these light pink scrubs, and they consider them not real doctors. But I think in real life, everyone has respect for everyone.”

Carr’s credentials certainly merit respect. A native of Rose Hill, N.C., she attended East Carolina University’s Brody School of Medicine and completed her residency in OB/GYN at Duke University in 2011. Immediately, she moved to Lexington and joined the KentuckyOne team. “I really fell in love with The Women’s Hospital at Saint Joseph East because it was relatively new and I just thought it was a great fit,” Carr says. She is part of a team that includes fellow OB/GYNs Dr. Elizabeth Elkinson and Dr. Anthony Smith, as well as perinatology provided by KentuckyOne High Risk Obstetrics Associates, that operates a clinic down the hall.

Carr and her associates treat everything from obstetrics, such as prenatal care and pregnancy issues, to gynecological issues, such as abnormal uterine bleeding, endometriosis, pelvic prolapse, urinary incontinence, etc.

Being an OB/GYN is second nature now for Carr, but initially she wanted to be a pediatrician, before leaning towards surgery. “I really liked the surgical aspects of everything,” she says. “When I did my OB/GYN courses after my general surgery courses, I realized that I was still able to do surgery, but you have a lot of continuity with patients. So, these are patients that you can potentially follow from adolescence to later on in their adult life.

“I always wanted to be a pediatrician, and then I learned in medical school that I didn’t want to be a pediatrician because I was always getting sick. I decided the next best thing would be to deliver babies. It’s been wonderful because they always come for their postpartum visits and always bring their babies with them. I get my baby fix that way.”

Carr estimates that approximately 50 percent of the patients she and her associates see are pregnancy related. Those in need of high risk care – such as patients with abnormalities in the way their uterus developed or those having issues with thrombophilia – are referred to KentuckyOne High Risk Obstetrics Associates. Other conditions that are referred out include oncology diagnoses and those with fertility issues. In the meantime, she stays busy with a patient population ranging in age from 10 to over 90. With a range that wide, there are a variety of issues, concerns and questions. “Sometimes adolescents will come in wanting to talk about the facts of life because the parents are uncomfortable with doing it, and they would prefer an OB/GYN to do it,” Carr says. “In adolescents who are sexually active, we talk about birth control, STD testing, and routine testing that needs to be done to make sure their reproductive health is good.”

With her older patient population, Carr naturally sees many patients dealing with concerns related to menopause, including hot flashes, urinary frequency, and vaginal dryness. “We definitely talk about hormone replacement therapy, which I think is an excellent treatment for the symptoms that they usually experience,” Carr says.

Regardless of the patient’s age or needs, Carr and her associates are determined to be as available as possible. They operate additional clinics in Jessamine County, Berea, and Richmond and hope to continue to grow. “We would like to spread out in the community to be more accessible to patients,” Carr says.