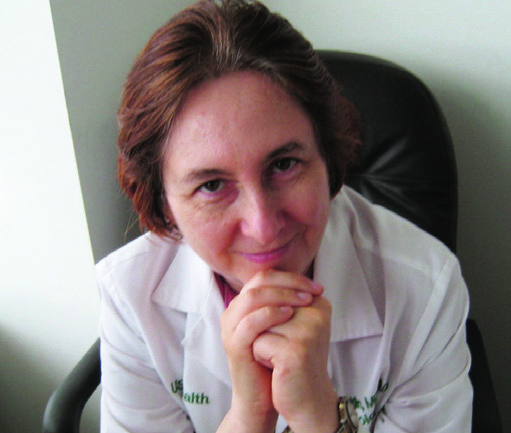 Evans is a board-certified internal medicine physician and a practicing diabetologist. She received her undergraduate degree from Kalamazoo College in health sciences in 1993. She attended the University of Kentucky College of Medicine, earning her doctorate of medicine degree in 2003.

She further trained at the University of Kentucky and the Christ Hospital in Cincinnati for her internal medicine residency and internship, respectively. Her goal is to provide quality, comprehensive care to adult patients. Her interests include comprehensive primary care, women’s care, and diabetic health.

U of L Announces Two Endowed Chairs in Neurological Surgery

LOUISVILLE The University of Louisville Department of Neurological Surgery has established two endowed chairs focused on physical medicine and rehabilitation, underscoring the department’s commitment to patient healing and quality of life.

Darryl L. Kaelin, MD, has been named the University of Louisville Endowed Chair for Stroke and Brain injury Rehabilitation. Kaelin specializes in neuro-rehabilitation with a focus on traumatic brain injury and stroke. He serves as chief of the division of physical medicine and rehabilitation.

Kaelin obtained his undergraduate degree from the University of Notre Dame and his medical degree from the University of Louisville School of Medicine. He completed his specialty training at the Medical College of Virginia where he was chief resident. Prior to assuming his current positions at U of L, Kaelin served as medical director of the Acquired Brain Injury Program at Atlanta’s Shepherd Center, a catastrophic care hospital for people with spinal cord and brain injuries. While at the Shepherd Center, he also served as the medical director of Brain Injury Research in Emory University’s School of Medicine.

LOUISVILLE Christopher E. Johnson, PhD, is the new chair of the Department of Health Management and Systems Sciences in the University of Louisville School of Public Health and Information Sciences. Johnson came to U of L from University of Washington effective January 1, 2015.

Johnson is a graduate of the United States Naval Academy and a former infantry officer in the United States Marine Corps. He received his PhD in health services research, policy and administra tion from the University of Minnesota.

At the University of Washington, Johnson served as an associate professor of health services, director of the graduate program in health services administration, and the Austin Ross Chair in Health Administration in the Department of Health Services in the School of public Health. Johnson is best known for work that seeks to understand how healthcare organizations and communities impact healthcare outcomes for veterans, under-served populations, and the elderly.

Johnson and colleagues at the Department of Veterans Affairs (VA), Rehabilitation Outcomes Research Center of Excellence, studied the impact of nursing home services on the provision of care to residents diagnosed with stroke and the general quality of care for veterans within the long-term care system. Johnson was in the first cohort awarded a VA Health Services Research & Development Merit Review Entry-level Program Career Development Award, a non-clinical PhD highly competitive multi-year grant designed to assist new researchers transition to mid-career success.

Goldstein Named Chair of the UK Department of Neurology

LEXINGTON Dr. Larry B. Goldstein, a highly acclaimed expert in stroke and related disorders, has been named the next chairman of the Department of Neurology at the University of Kentucky College of Medicine and co-director of the Kentucky Neuroscience Institute.

Goldstein will be Joining UK from Duke University where he is professor of neurology and Chief of the Division of Stroke and Vascular Neurology and director of the Duke Stroke Center and an attending neurologist at the Durham VA Medical Center. Goldstein will begin his post in June.

Goldstein received his bachelor’s degree in 1977 from Brandeis University and his medical degree from Mount Sinai School of Medicine in 1981. His subsequent professional training included an internship and neurology residency at Mount Sinai Medical Center, New York, and a research fellowship in cerebrovascular disease at Duke University.

Goldstein’s focus in his clinical, research, educational, and service activities is on stroke and ischemic neurologic disorders. He has published more than 650 peer-reviewed journal articles, editorials, book chapters, abstracts, and other professional papers. His research has spanned stroke-related laboratory-based studies, clinical trials, quality of care, and care delivery studies, as well as clinical effectiveness and epidemiological investigations.

LEXINGTON in the past decade, the number of Kentucky babies starting life with a drug dependency, or neonatal abstinence syndrome (NAS), has skyrocketed from 1.3 per 1,000 births to 19 per 1,000 births.

Just like adults coming off drugs, babies whose mothers used opiate drugs during pregnancy will suffer from a number of withdrawal symptoms, including tremors and irritability. The most common form of treatment for babies suffering from withdrawal is the opiate morphine, which can hinder brain development during a critical growth period in a baby’s life. The treatment period for infants requires hospitalization and can last weeks or even months, resulting in high hospitalization costs.

Dr. Henrietta Bada, a neonatologist at Kentucky Children’s Hospital, has conducted preliminary research supporting an alternative drug to morphine that will help babies recover from NAS faster and with fewer neurological effects. Bada recently published findings from a pilot study determining whether clonidine, a nonopiate, non-addictive drug commonly used to treat hypertension, would result in improved neurobehavioral performance in babies when compared with morphine, an opiate. The research, which was published in the February 2015 issue of the journal Pediatrics, presents encouraging evidence that clonidine was as effective as morphine.

Bada’s research was the first known trial to examine clonidine as a single-drug therapy for babies with NAS. The study also suggests clonidine treatment could be completed after discharge, allowing babies to go home earlier and also reducing hospital stay costs. Bada stressed that more research will be required to validate these findings.

A copy of the published report is available upon request to elizabethadams@uky.edu.

“Mechanical assisted circulation is the most rapidly developing area of cardiology, but there is no journal dedicated to papers in this area,” Guglin said. “The growing number of patients with heart failure, the limited pool of donors for cardiac transplantation, and several technological breakthroughs have all made the option of implanting a ventricular assist device as destination therapy more important, and therefore it’s essential to give cardiologists a dedicated forum to share their research and opinions on the topic.”

The Vad Journal will be an open access publication, meaning that its content is available online without significant financial, legal or technical barriers.

The VAD Journal can be accessed at http://uknowledge.uky.edu/vad/

Lexington Clinic Announces 2015 Board of Directors

LEXINGTON At Lexington Clinic’s annual meeting of the board of directors, new officers were chosen to serve for 2015.