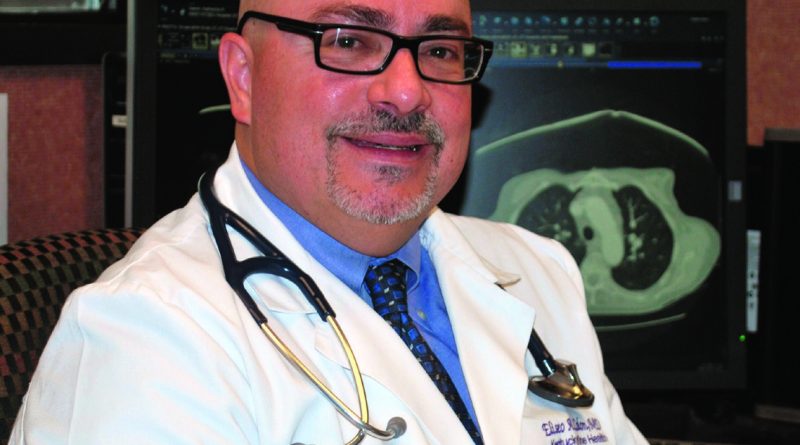 LEXINGTON Lung cancer kills more Americans than the next four most common cancers combined, but for some Kentuckians, a new early detection program at Saint Joseph Hospital and Saint Joseph East could make the difference. Pulmonologist Eliseo A. Colon, MD, KentuckyOne Health Pulmonology Associates is helping KentuckyOne Health harness the power of the National Lung Screening Trial (NLST) to build a program that can help smokers detect potentially malignant growths in their lungs in the preclinical phase. Colon states that while other common cancers have long had early detection methods – such as colonoscopies, mammograms, pap smears – “We did not have anything to screen for the leading cause of cancer deaths in America; now we have a tool that could reduce lung cancer mortality by 20 percent in some groups.”

That tool is low-dose CT scan, which uses as little as 20 percent of the radiation of standard CT scans. Its ability to detect nodules using limited radiation is extremely valuable. In KentuckyOne Health’s program, when screening detects nodules, protocols are enacted. Colon notes, “We will be able to track and follow those patients, following up every three months to have the nodules checked for growth.” Nodules that show signs of growth may be further examined. The program is available for long-time smokers between the ages of 55 and 74, or those who have quit within the last 15 years. Colon is excited to offer this to residents of central and eastern Kentucky and proud of the process KentuckyOne Health has devised.

Historically, attempts at early detection of lung masses through screening have had no effect on mortality rates. Chest x-rays and sputum cytology were the only tools deemed possibly effective, but they never panned out as such. Some uncontrolled studies using CT arose internationally and showed that low-dose was effective at revealing lung nodules that are three centimeters or less in size.

The KentuckyOne Health program screens patients for such nodules. Colon explains that if nodules are discovered, two protocols are enacted. First, a full profile of the patient’s risk factors is created; then the nodules are checked every three months for signs of growth. He continues, “Follow-ups allow us to see if that nodule is growing over the course of the year. Depending on the size of the increase, we adjust the frequency of follow-up screenings. An increased nodule in someone who is a smoker runs the risk of being a malignancy.” While the cause of a nodule might be cancer, Colon notes that “not every nodule is malignant.” Infection, vasculitis (rheumatoid arthritis), and fungal infections like histoplasmosis could each cause nodules.

Once a nodule is tracked and determined to be potentially malignant, the treatment course is highly individualized. Closer investigation might be done with a bronchoscope or ultrasound, or a biopsy might be taken. PET scans to determine nodule activity might be called for. If removal is deemed necessary, a thoracic surgeon is contacted. Colon stresses that screening is important because most nodules are asymptomatic. He says, “My recommendation is that anyone who is a smoker and is between the age of 55 and 70 years, and has smoked for at least 30 years, should get the low-dose CT scan – and continue to get one every three years thereafter.”

Building the Case for Screening

KentuckyOne Health’s program has the force of the first highly controlled and peer-reviewed study on the process for screening. The National Lung Screening Trial (NLST) included more than 50,000 persons enrolled at 33 US centers. Smokers between 55 and 74 with at least 30 pack years, or those who had quit within the last 15 years, were eligible for the study. It compared groups who had the low-dose CT scans with those who had chest radiography. The latter was used as the control, as it had been definitively shown not to reduce patient mortality rates in a previous study. All participants received three years of annual screenings.

The mortality rate in the group that had the low-dose CT scan was 20 percent lower than that of the control group. Colon lauds this finding as highly actionable, saying, “That is a significant advance because we had nothing that worked before.” This amounts to three fewer deaths per 1000 high-risk persons. Colon notes, “Historically, getting private insurance and Medicaid/Medicare to approve coverage for the screening has been a challenge. This data from the NLST has been the key to obtaining authorization for coverage.”

According to Colon, Medicare just approved the lung screenings and KentuckyOne Health’s new program is already serving patients. The process is simple, Colon says: “After we conduct the screening, we inform the patient’s primary care physician (PCP) so that they can pursue any needed next step.” KentuckyOne Health’s current challenge is to reach out to the smokers who could benefit. Most are referred to Colon by primary care physicians who have heard about the program, but marketing campaigns are in development. Colon says there is also an outreach program to go directly to PCPs and introduce them to the program.

Colon knows he can have a positive impact on lives here in Kentucky, as this is a screening test that definitively reduces mortality. Progress to that end will depend on patient compliance and coordination of healthcare professionals to utilize the data. Colon notes, “The program is a multi-disciplinary approach, which not only involves lung physicians, but radiologists, oncologists, and thoracic surgeons.” He concludes, “The goal of our program is to work together as a team and help the patient navigate through the process.

Call 855.34.KYONE (59663) to schedule a low-dose CT screening at one of our convenient locations. KentuckyOneHealth.org/lung-care