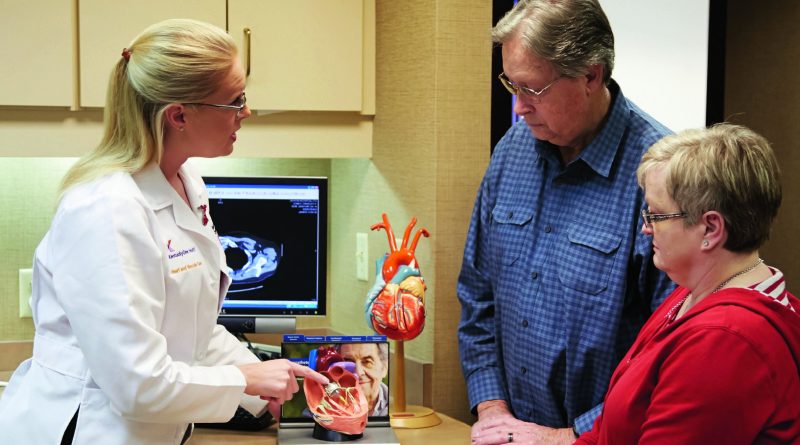 LOUISVILLE Ask most three-year-olds what they want to be when they grow up, and you will likely get the typical ideology of preschool minds – ballerina, fireman, superhero, teacher. Not so for Kendra J. Grubb, MD, MHA, cardiovascular surgeon with university of Louisville Physicians, Inc., who at the age of three answered – surgeon.

Growing up in the rural Pacific Northwest, Grubb’s father ran a veterinary practice out of their home. “That was my first exposure to medicine and surgery. Seeing my father operate on animals was nothing short of magical,” says Grubb. At three years old, her path was set.

Grubb spent her undergraduate years at the university of Southern California (USC) in the late 1990s where, much like Kentucky, healthcare was in flux with the onset of managed care. Several physician friends advised her not to go into medicine but to go into business. Rather than relinquish her dream, Grubb spent two years pursuing a Master of Health administration before going to medical school. “It was incredibly interesting and allows for a very different perspective on the way the healthcare system works,” she says.

Remaining at USC for medical school, in the sun-soaked, celebrity-laced city of Los Angeles, Grubb initially dreamed of becoming an orthopedic surgeon and working with professional athletes like the Los Angeles Lakers. “However, I very quickly realized there was something missing from that dream. Orthopedic surgeons are amazing, but I wanted something more,” she says.

Following her instincts, she attended the University of Illinois in Chicago for general surgery residency. Grubb went on to explain, “During residency I was exposed to cardiac surgery and immediately knew this was what I wanted to do. It had all the elements I was searching for – the physiology, the fine detail – and the impact factor, the ability to influence patients’ lives.”

A penchant for groundbreaking opportunities began to emerge when Grubb matched at the University of Virginia (UVA) in Charlottesville for her cardiothoracic surgery fellowship, where she had the opportunity to become the first woman trained by the program. “It is a very traditional program, and like many CT surgery programs, it was known as an ‘old boys’ club,’” says Grubb, also the first female adult cardiac surgeon at U of L.

If You Build It, They Will Come

Grubb’s experience at Columbia with transcatheter aortic valve replacement (TAVR), a treatment for high-risk and inoperable patients with severe symptomatic aortic stenosis, was one of the driving forces that brought her to Louisville to Jewish Hospital, a part of KentuckyOne Health. Initially she planned to stay in a larger market, but, “it became very apparent there were lots of people already doing what I wanted to do, and probably better than I could at that point, as I was still finishing my training,” she says. When dr. Mark Slaughter, chief of U of L’s Thoracic and Cardiovascular Surgery Division and executive director of cardiovascular services for the KentuckyOne Health Louisville market, approached her about coming to Kentucky, she says, “It was immediately clear there was an incredible amount of opportunity here.” With a budding TAVR program, in addition to other minimally invasive procedures, Grubb felt she could make an impact. The other side of opportunity lay in the state of Kentucky’s health. “This part of the country has an amazing amount of heart disease, and the opportunities to educate the public are vast,” she says.

Having established her practice in Louisville in July 2013, Grubb says, “It’s been surprisingly easier than I expected,” due in part to positioning herself where there was a need. She describes it as a case of, “If you build it, they will come.”

Hired to help expand the TAVR program, Grubb has become the surgical director of the Valve Team and has taken the program to new levels. Most notably, the Valve Team is now performing TAVR totally percutaneously, with patients awake and not under general anesthesia. One fantastic outcome of performing the procedure this way is that it often results in only an overnight hospital stay rather than four to six days of in-hospital recovery. “To come from a place that was ahead of the TAVR learning curve and have the opportunity to apply those innovations here has been a very rewarding experience,” she adds.

Grubb believes TAVR is possibly the most impactful recent development in heart care. “Aortic stenosis is the most common valvular pathology, and often diagnosed at an advanced age. With TAVR, you can take a disease that kills 50 percent of symptomatic patients within 18 months, and all of the sudden you can treat them,” she says.

TAVR is not the only procedure Grubb has been advancing, though. Recently she and Valve Team Interventional Cardiologist Dr. Michael Flaherty began performing a percutaneous procedure for mitral regurgitation called MitraClip. “For patients suffering from heart failure because the mitral valve is leaking, instead of open heart surgery, we can go in through the groin and put a clip on the mitral valve leaflets,” says Grubb. While she cautions MitraClip is not as good as repairing or replacing a valve through open surgery, it is a viable option to help high-risk and inoperable patients feel better and add years to their life expectancy.

Hybrid revascularization is another innovative procedure Grubb has brought to Jewish Hospital. While she contends open coronary artery bypass graft (CABG) is still the gold standard, “There are less invasive strategies where you can combine all of the benefits from cardiac surgery with the benefits of interventional cardiology.” The hybrid procedure is done off-pump, so the patient does not have the risks of going on cardiopulmonary bypass.

For a patient to be a candidate for hybrid revascularization, they need to have a blockage in the left anterior descending (LAD) or left main coronary artery. “The LAD is one vessel that makes surgery better than stents,” says Grubb. “Stents and saphenous vein graft bypass have never been shown to have a survival advantage, but the left internal mammary artery (LIMA) to LAD bypass actually does.”

During the procedure, Grubb does a direct LIMA to LAD off-pump through a small incision between the ribs, while an interventional cardiologist puts a stent in the other coronary arteries. The result is “complete revascularization without sternotomy and without cardiopulmonary bypass,” she says.

While she is pushing the envelope of minimally invasive procedures, Grubb says her practice is, and always will be, based in traditional open heart surgery. Currently she and the Valve Team perform transcatheter procedures one day a week with hopes to expand.

Grubb may be uniquely female in a male-dominated field, but one area where women are incredibly prominent is the incidence of heart disease. “First and foremost, I think many people don’t realize heart disease is the number one killer of women. All forms of cancer combined do not kill as many women as heart disease annually,” she contends. She is not alone in her efforts; the Department of Cardiovascular and Thoracic Surgery is unique as there are currently four female physicians – two critical care specialists, a congenital heart surgeon, and Grubb – dedicated to caring for patients with cardiovascular disease.

Among the challenges, women often present differently than men, with symptoms other than crushing chest pain, resulting in a delayed diagnosis and treatment. Mortality outcomes are higher, and women also have worse procedure-related mortality rates, although doctors do not know why. “Other than TAVR, every procedure we do for women, their mortality is worse than men,” says Grubb.

To further education on this issue, Grubb initiated the Louisville Symposium on Heart Disease in women last year – a status report on treatment and prevention of heart disease in women for physicians, nurses, allied health professionals, and the community. She will be offering the program again this year on Saturday, May 16, 2015.

Reminiscent of her days dreaming of working with the Lakers, Grubb believes heart care is best performed as a team sport. “I very much believe in the heart team approach to patient care, where collaboration between disciplines results in a better outcome for the individual patient. When we collaborate at that level, we are able to get the best of all skill sets,” she says. Disciplines Grubb frequently collaborates with include interventional cardiology and vascular surgery.

Although there are many upsides to the opportunity she has found here, there are plenty of downsides to the pervasiveness of heart disease suffered in Kentucky. “Until I came to Kentucky, I had never seen such coronary disease in 30- and 40-year-olds. It didn’t exist at the institutions where I trained at the rate that I see it here,” says Grubb. She attributes this to the state’s rates of obesity, smoking, diabetes, and genetics.

In addition, Grubb says the prevalence of endocarditis in 20-year-olds is another unique occurrence in her experience here, due to the epidemic of heroin and drug abuse in the area, often cited as a side effect of KASPER laws to curb prescription drug abuse. Tellingly, Grubb paints a picture of the ICU with octogenarian TAVR and bypass patients on one side and 20-something endocarditis patients on the other.

Even with all the challenges she faces, opportunity continues to knock for Grubb in Louisville and Kentucky. Looking for a place to make a big impact, she has found an overwhelming need and a practice home with a reputation for innovation that matches her own level of inquisitiveness and determination. It’s becoming increasingly clear that she’s in the right place at the right time.