This is Part 2 of a career retrospective on Preston P. Nunnelley, MD. With over 40 years in private OB/GYN practice, organized medicine, and hospital administration, Nunnelley is retiring as VP and chief medical officer for Baptist Health Lexington in February 2015. See MD-UPDATE #90 for Part 1 of this story.

MD-UPDATE: You’ve been active in organized medicine throughout your career. What were some of the offices you held?

Tell us about your work on the Kentucky Board of Medical Licensure.

I’ve been on the board for over 20 years and president for the last six to seven. These are gubernatorial appointments, and you are appointed in four-year terms. Governor Patton first appointed me. I’ve been through both Republican and Democratic administrations. I hope that means I’m doing a good job rather than being a political appointment. KBML has the three deans of the medical schools, the commissioner of public health, three consumers, and seven doctors. We meet every month with a general meeting and panel meetings. House Bill One required that we resolve cases in a shorter period of time, so we added four additional meetings to our annual schedule. Sometimes we review 30–40 cases each meeting. That is pretty time-consuming, so our members contribute a lot to the health of Kentucky.

My term on the board ends in June 2016, and it’s time to turn it over to someone else. I’ve done that in most all of my other positions. I think you need to rotate those positions – term limits. But you have to be careful, especially with the Board of Licensure. It takes a couple of years to get comfortable with it. It is the second term where people really get proficient in what they are doing.

What’s the biggest challenge for the Board of Licensure?

That’s easy – prescription drug abuse; we have a huge number of complaints. Not all are actually abuse, but some are. Unfortunately, when people die from overdoses, it’s possible a doctor wrote that prescription. It doesn’t mean he did anything wrong, but we have to evaluate it. Not all prescription drugs come from physicians; we have pharmacy robberies and many other ways people get the drugs. That takes a lot of time to sort through. House Bill One has mandated we look at every one of those cases.

What are your thoughts on curbing addiction and prescription drug abuse?

Pain management specialists have a real challenge on their hands. Kentucky House Bill One has been positive because doctors can get a KASPER report. We have to be extremely careful to treat legitimate pain. Patients have pain, and you have to deal with it. Some doctors think that the restrictions and risks of prescribing pain medications are not worth it. If we have that attitude, then we’ve failed.

My involvement as the president of Board of Licensure is to reassure doctors and say, “If you just follow the rules, you’ll be ok.” One very positive outcome from House Bill One was mandated continual medical education. Dr. Patrick Murphy has been very involved, and through the Greater Louisville Medical Society he has developed an educational program on prescribing. They’ve been very progressive, and he’s been one of the prime movers.

Kentucky has a well-documented shortage of physicians. What can be done about that?

About three or four years ago, a study by the Kentucky Institute of Medicine said we’re over 2,200 doctors short, particularly in primary care. The other issue is the Affordable Care Act, which has put more people seeking primary care. The deficiency is also geographically located in eastern and western Kentucky. There are big holes where we don’t have physicians, and we can’t seem to get them there.

We’ve tried the rural Kentucky scholarship program, which pays medical school debt if the doctor practices in the under-served areas, but it hasn’t really worked. The only way to resolve this is to have more primary care doctors and changes in our educational system.

We have two allopathic schools and one osteopathic school. When discussions about the osteopathic school began, it was to provide more primary care in the areas where the school was, and there’s been some success. The allopathic schools encourage students to go into primary care, but in medical school you spend so little time in primary care and more in cardiology, dermatology, OB/GYN, surgery, and specialties. I don’t know that we need a new medical school, but increasing the class size may be appropriate. Also, there is no shortage of doctors in Louisville, Lexington, and Pikeville. People tend to stay where they train.

You’ve been chief medical officer of Baptist Health Lexington, which used to be Central Baptist Hospital. Talk about the evolution and growth of the hospital.

It’s evolved for 60-plus years from a small hospital to Baptist Health Lexington with just about every specialty. We were the first private hospital in the US to have a magnetic imaging system. Then we were the first to have two. We have robotics. We’ve gone from almost an exclusively primary care hospital to almost all subspecialties. We have a huge expansion to address quality of care. We’ll improve women’s care, cancer care, and treatment. We’ll have all new ICU’s to give our patients the best care available anywhere. I’ve been fortunate to practice at a hospital that’s willing to invest in quality. We’re not trying to be the biggest hospital in town, however we were recognized this year as being the best in the state. I think that is a wonderful reflection of the commitment that the leaders of this hospital have made to quality of care. I’ve heard Mr. Sisson, our president, say many times, “You take care of the patients, provide them with quality of care, and the hospital will be successful.”

I think you’ll see more physicians gravitate to this hospital because of the quality of care. If there are any questions, it’s where are we going and how big are we going to get? Not just this hospital but also the Baptist Health system. We’ve got quite a few hospitals; we cover from Corbin to Paducah. That has advantages in patient population health. We have a beautiful network that can put a patient in a Baptist Health hospital without having to drive a long distance. Now, growth brings concerns; you can’t get around that. We’ll become more regional, with a combined effort between Lexington, Richmond, and Corbin. All doctors are concerned about how many doctors are going to be hired. How many are going to be working for whom? Do we treat a doctor differently if he is hired or independent? We treat them exactly the same through our medical staff office. We make no distinction.

What is your greatest accomplishment?

I am most proud of having helped patients to have a better life. The babies I have brought into this world and the management of women’s health makes me extremely proud. I’m also proud that I’ve received several distinguished service awards from KMA, the UK Alumni Association, and Eastern Kentucky University. I’ve received the Jack Trevey Community Award from the Lexington Medical Society for Outstanding Community Service. It’s not the award itself that is significant but the recognition of the things that caused you to get the award. That’s what makes me feel good about awards.

Any closing thoughts about your work as a doctor and physician leader?

I’ve had no second thoughts about the directions I’ve taken in my career, and I take a lot of pride in the relationships I’ve had with my patients. When I was president of KMA, I traveled across the state talking to the different medical societies. The theme of my message was “Pride in Medicine.” I took several Norman Rockwell prints with me – the ones with doctors and patients as the focus. I think those prints depict the best of the physician-patient relationship. You can see the emotion in those patients’ faces and the trust that they have in their doctors. I still feel that’s what being a physician is all about – establishing a relationship with your patients so that they have that trust in you. 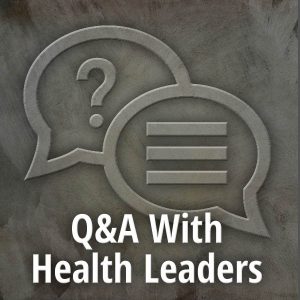