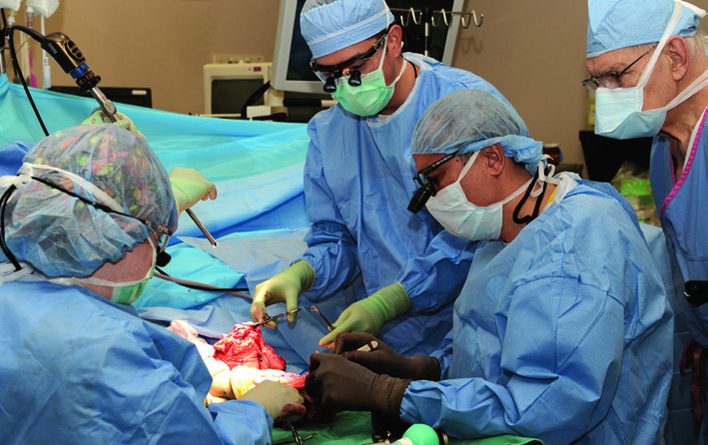 Two U of L Researchers Named Fellows of the NAI

LOUISVILLE Two researchers at the University of Louisville (U of L) were named Fellows of the National Academy of Inventors (NAI).

Suzanne T. Ildstad, MD, director of U of L’s Institute for Cellular Therapeutics, and Kevin M. Walsh, PhD, director of the Micro/Nano Technology Center, were among 170 new fellows named. They will be inducted by Deputy U.S. Commissioner for Patent Operations Andy Faile, of the United States Patent and Trademark Office, during the 4th Annual Conference of the National Academy of Inventors on March 20, 2015, at the California Institute of Technology in Pasadena.

Those named bring the total number of NAI fellows to 414, representing more than 150 prestigious research universities and governmental and non-profit research institutions.

To qualify for election, NAI fellows must be academic inventors named on U.S. patents and nominated by their peers for outstanding contributions to innovation in areas such as patents and licensing, innovative discovery and technology, significant impact on society and support and enhancement of innovation.

Ildstad is the Jewish Hospital Distinguished Chair in Transplantation and professor in the Department of Surgery in the U of L School of Medicine. She also holds associate appointments in the school’s Department of Physiology and Biophysics and Department of Microbiology and Immunology.

Ildstad has 20 patents related to her research and is the founding scientist of Regenerex LLC, a biotechnology company. Her research is being translated into the clinical arena with FDA approval to enroll patients in six different research protocols to treat autoimmune disease (multiple sclerosis), red blood cell disorders (sickle cell anemia and thalassemia), and inherited metabolic disorders, and to induce tolerance to organ transplants (kidney).

Walsh is a professor and holder of the Samuel T. Fife Endowed Chair in the Department of Electrical and Computer Engineering at the J.B. Speed School of Engineering. He also is founding director of the Micro/Nano Technology Center (MNTC), home of the nationally-ranked, class 100, $30 million, 10,000-square-foot cleanroom in which dust particles are totally eliminated so one can successfully design and prototype ultra-miniature devices and systems for a variety of fields including microelectronics, health care, consumer products, and defense.

Walsh has 12 awarded patents and is co-founder of four technical start-up companies – Assenti, Intellirod Spine, UltraTrace Detection, and Simon Sounds. He has published more than 150 technical papers in the areas of micro/nanotechnology and micro-electro-mechanical systems (MEMS), and his research group has won over $35 million in external research funding from the National Science foundation, NASA, National Institutes of Health, and others. He has twice been presented with the school’s top Research Award for the three-year periods of 1998–2000 and 2007–2009.

LOUISVILLE A Paducah attorney has been named chairman of the Baptist Health Board of Directors. R. Christion “Chris” Hutson, who previously served as vice chairman, was elected chairman by fellow board members during the board’s December meeting in Louisville. Hutson’s term begins Jan. 1.

Hutson, who already was a director of the Baptist Health Paducah and Baptist Health Madisonville boards, is a member (partner) with the law firm of Whitlow, Roberts, Houston & Staub, PLLC, in Paducah.

Allen Rudd, president of Rudd Insurance Inc. of Madisonville, will now serve as vice chairman. Rudd is chairman of the Baptist Health Madisonville board.

In other board news, two physicians were appointed to four-year terms: Ramsey N. Nassar, MD, of Nephrology Associates of Kentuckiana, PSC, in Louisville; and Randal W. Owen, MD, president/managing partner for Lexington OBGYN Associates. “We believe it’s very important to include the perspective of practicing physicians on the Baptist Health board of directors,” said Baptist Health CEO Stephen Hanson. “Physicians help ensure that decisions we make have a sound basis in real-life medicine.”

LOUISVILLE A Bowling Green, Ky., man was the ninth patient to receive a hand transplant by the Louisville Vascularized Composite Allograft (VCA) surgical team at Jewish Hospital during a 16-hour procedure on November 25. The Louisville VCA team is a partnership of physicians, researchers, and health care providers from Jewish Hospital, part of KentuckyOne Health; the Christine M. Kleinert Institute for Hand and Microsurgery (CMKI); the Kleinert Kutz Hand Care Center; and the University of Louisville.

The hand transplant recipient, Jim Ray, is recovering and resting comfortably at the hospital.

LOUISVILLE Greater precision in targeting tumors and reducing treatment times to just a few minutes are just some of the benefits of the new Truebeam™ radiotherapy system recently installed at the Charles and Mimi Osborn Cancer Center at Baptist Health Louisville. The equipment is from a new line of super accelerators by Varian Medical Systems.

The Center started treating patients with the Truebeam system on December 1.

LEXINGTON UK HealthCare has announced that The Medical Center at Bowling Green has become the newest member of the Norton Healthcare/UK HealthCare Stroke Care Network, a community-based stroke initiative providing the highest quality clinical and educational programs to hospital staff and the community. The Medical Center is the only hospital in south-central and western Kentucky to join the network that includes 25 affiliate hospitals.

As part of the Norton Healthcare/UK HealthCare Stroke Care Network, the medical center will continue to be a first-line stroke treatment center. The collaboration will allow for the sharing of best practices and outcomes data to promote continuous quality improvement in stroke care.

LOUISVILLE When Louisville’s first professional outdoor soccer team takes the field for preseason games in February, players will have the support of the Baptist healthcare system.

In the coming months, Baptist Health Sports Medicine will work with the team to host events introducing players to the community, drum up excitement for the team, and get the word out about their services as well.