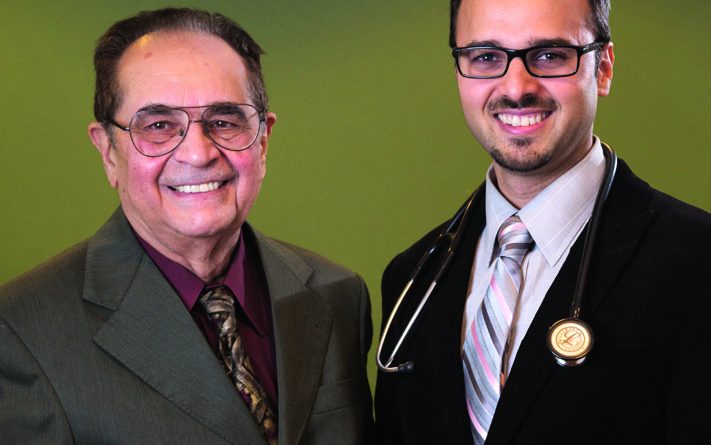 LEXINGTON When Manoochehr Mazloomdoost, MD, (Maz) founded Pain Management Medicine (PMM) in 1992, he did so with a vision to help pain sufferers, of which he saw many in society. He says he remembers thinking, “If I can help them, I will be a great achiever.” He would also have to be a pioneer, as pain medicine and pain management was not yet a recognized specialty. It became one in 1998.

The comprehensive approach Maz has developed at his highly successful clinic is grounded in three sentiments: one, that pain is a messenger, not the disease. Two, that the intensity of chronic pain is exacerbated when it is combined with depression: both aggravate each other. And three, that familial collaboration is the source of great strength. As such, his partners are his wife, Camillia Shirazi, MD, their son, Danesh Mazloomdoost, MD, (Danesh) and their prospective daughter-in-law Andrea Omidy, Psy, PhD.

Maz was educated in Iran and has been practicing medicine for 50 years. Following anesthesiology experience there and in the US, he settled in Lexington, where, in 1988, he became director of the Lexington VA Pain Clinic. Shirazi met Maz while she was doing her anesthesiology training at Shiraz University, in Iran. She switched to psychiatry following their move to the US, aiming to better address the mental health impact of immigration and other life transitions. She spent 10 years practicing at the VA while PMM was getting established. Her observation that, “Most of the patients that Dr. Maz was treating for chronic pain were also suffering from depression,” opened the door for their merging of the two practices. Danesh attended medical school and completed residency in Anesthesiology at Johns Hopkins in Baltimore, followed by a fellowship in Interventional Pain at MD Anderson in Houston in 2010, joining PMM after that.

PMM’s main office is in Lexington, with satellite facilities in Corbin and Winchester that take clinic one day a week. The practices see an adult population largely between the ages 30 to 60. Most patients come to them for chronic, neuropathic, or cancer-related pain. Most of the procedures offered are minimally invasive, same-day, and rarely leave a mark. These treatments are far more sustainable than chronic opiate maintenance. Psychiatric care is available at the Lexington office, as they have found that some patients develop a better response to pain management when they also receive counseling support. Shirazi treats many of her patients for mood disorders, which she says are very common among chronic pain sufferers.

The value added for the Pain Medicine and Management patient comes from both the presence of the extended Mazloomdoost family and the utilization of the best attributes of a caring family: PMM has a culture of listening, communicating, and sharing information. The physicians regularly “curbside” each other, so informal exchanges help inform their approaches to their patients. With patients, they employ an unhurried approach to seek out the source of problems.

Shirazi’s observation of Maz’s style is, “He pays attention to his patient’s problems. He talks to them, finds out the source of the problem. Many of our patients complain that other physicians they visited did not give them nearly as much personal attention.” Danesh considers this attribute of paramount value, noting, “a really good pain doctor is a really good diagnostician: we are the first line of understanding why someone hurts.”

Such attention goes hand-in-hand with having therapists in the practice. Shirazi continues, “We were not educated about the connection between pain and depression. I began treating some of these pain patients for depression, and amazingly, their ability to tolerate pain increased.” She uses both anti-depressants and counseling because, “Most of the time, just medication is not enough. You have to listen to your patient to see what the main problem is.”

Communication: The Key to Challenges and Future Frontiers

The primary challenge in the field of pain management has evolved substantially. When Maz began PMM, insurance companies did not know the field existed, which led to many billing problems. Today, those demands are replaced by the hydra of opioid abuse.

PMM’s satellite office in Corbin has given them a window to the front line of the epidemic. Danesh finds that the population there has been exposed to such high levels of medication in the past that a pervasive attitude ranks opioids on par with Tylenol. He says, “They are unfortunately used to an availability that is unrealistic.” He adds, “Our Corbin practice is as much a social program as a medical office because the resources we provide are otherwise non-existent in the community.”

Maz has been involved in this battle more on the national level, helping promote KASPER to Congress a few years ago. There is the national version in development, called NASPER, which is yet to be funded.

Danesh is thoughtful on the future of pain medicine. Not surprisingly, he sees communication as the primary frontier. He says, “It’s a matter of educating people about what pain management means. Many of the patients I see are completely unaware of what we can actually provide.”

PMM approaches its future expansively. Maz has developed a website devoted to the intersection of pain and nicotine addiction called Smokingpain.com. It also details a simple, practical formula for gradually eliminating nicotine addiction, one that puts self-control and reasoning at the forefront.

PMM recently brought on Omidy as a psychologist who practices part-time in the clinic. She has a PhD in Psychology from Oklahoma State University and completed a post-doctoral fellowship at Harvard Medical School. While she specializes in disordered eating (both over and under-eating), she sees a spectrum of disorders and plans a comprehensive therapeutic approach for the clinic on coping skills. Danesh notes, “She currently has patients on a wait list given her popularity.”

The PMM approach places family as engine and anchor. That perspective allows its physicians to collaborate effectively and bring a sum greater than its parts to their patients. It also extends to what is promoted to patients. For Shirazi, she says of their patients, “Those who have family support can tolerate their pain much better.” And for Maz, it is summarized in a point of obvious pride: “I believe I have prevented many divorces. I believe that by decreasing chronic pain in a healthy way, I have helped people go back into a good life, a good family. That is why I became interested in this.”