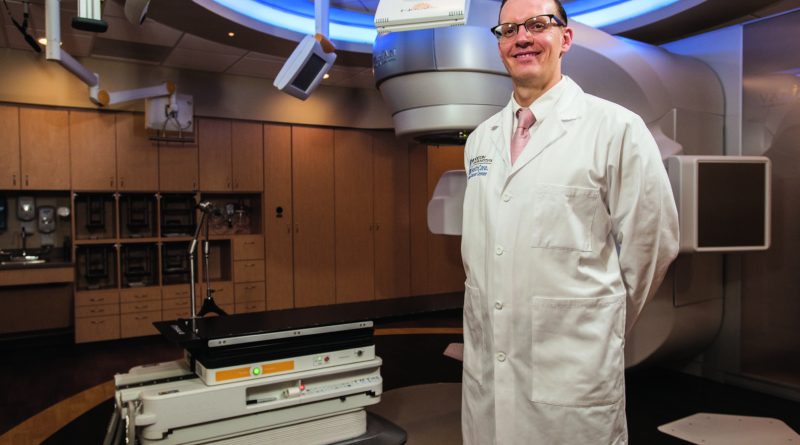 LOUISVILLE In October 2011, MD-UPDATE featured the new Norton Cancer Institute – Downtown, an innovative facility designed to simultaneously treat the medical and psychosocial needs of patients in a wellness-centered atmosphere. Proving to be more than just a uniquely attractive facility, Norton Cancer Institute has adopted technology and procedures that are changing the way patients experience radiation therapy.

“Since our center opened, we have pioneered the use of frameless radiosurgery for brain lesions, and we’ve done over 250 cases,” says Aaron Spalding, MD, PhD, adult and pediatric radiation oncologist. “The main impact has been that in addition to treating malignant brain tumors, we’re now better able to treat tumors near critical structures,” all while utilizing non-invasive techniques and without requiring pins screwed into a patient’s head.

From that, Spalding and his colleagues have been able to expand treatment to non-tumor applications for arterial venous malformations (AVMs) and trigeminal neuralgia. “We are able to deliver very high dose radiation about the size of the tip of a sewing needle really close to the brain,” says Spalding. The Institute has utilized this technique to treat 40 AVM patients and has improved trigeminal neuralgia treatment to include minimal sedation in a 60-minute outpatient procedure. Spalding says their results have been as good, if not better, than with traditional head frames. Their data have been presented at the International Society for Radiosurgery (ISRS) most recent meeting in Toronto.

Building on their frameless radiosurgery experience, Norton Cancer Institute – Downtown is putting high-dose radiation to use in areas beyond the brain, including the liver, pancreas, and prostate. “Now that we’ve become more familiar with using high-dose radiation inside the skull, we’ve also pioneered locally the use of body radiosurgery or stereotactic ablative body radiotherapy (SABR),” says Spalding.

SABR’s biggest advantage is that it reduces the number of radiation treatments from upwards of 44 to five or fewer. For patients, that means one week of treatment rather than one to two months. Additionally, the use of SABR can prevent invasive surgery in some cases, and it reduces the incidence of side effects such as fatigue and pituitary dysfunction. Spalding adds the cure rates with SABR are equal to, or in some cases higher than, traditional radiation therapy.

One tool that enhances SABR’s precision in the prostate is the Calypso® 4D Localization System. “Calypso is a small transponder around the size of an uncooked grain of rice,” says Spalding. The transponders are implanted in the prostate. During radiation therapy, the transponders send out radiofrequency waves 60 times a second to allow physicians to localize the prostate in real time and deliver the most accurate treatment. Norton has been utilizing Calypso since January 2014 with both traditional radiotherapy and SABR patients.

Beyond external beam therapies, for the past 12 months Norton patients with metastatic prostate cancer have had access to a new treatment option – Xofigo®. An injectable medication, “Xofigo allows patients to have treatments for bone metastases with very low side effects, much lower than chemo and much better tolerated. It allows us to prevent not only death but also bone fractures from prostate cancer,” says Spalding.

Norton Cancer Institute – Downtown includes multidisciplinary clinics for brain tumors, sarcoma, and lung cancer. With the new Norton Women’s and Kosair Children’s Hospital developing on the former Norton Suburban Campus in Louisville’s east end, many of the women’s health services are centered there. However, Spalding says the program has been designed to be “geographically comprehensive but specialized care.” For example, weekly breast cancer conferences are teleconferenced across all Norton locations, so that women may receive care wherever they need it. Spalding says the next step will probably be an integrative multispecialty breast clinic.

According to Spalding, Norton sees “more cancer than anyone else in the state.” That large volume, coupled with advanced techniques, a uniquely designed facility, an active research portfolio, and an institutional affiliation agreement with the University of Kentucky round out a comprehensive scope of cancer care. Ultimately, for Spalding, those elements converge to target two of the most fundamental questions in cancer care in Kentucky: “How do we become better educators of our patients?” and, “How do we get patients where they need to be no matter where they live in the state?”