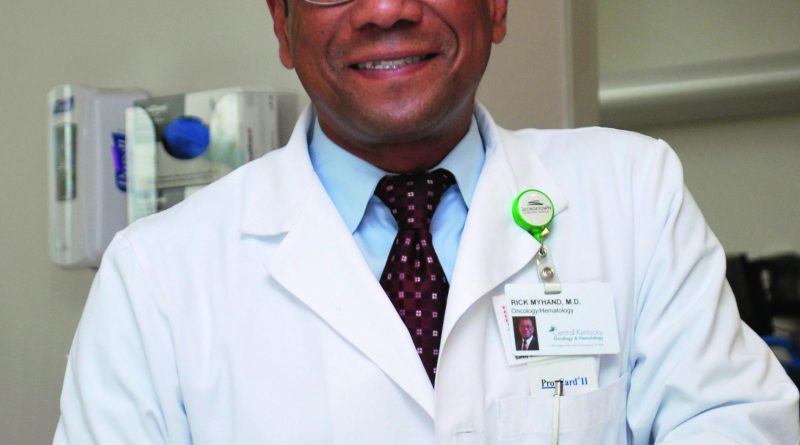 GEORGETOWN, KY Rick C. Myhand, MD, knew he wanted to be an oncologist two months into his first clinical rotation. It was not, however, the allure of innovative treatment technologies or a fascination with tumor growth that compelled him so certainly. Rather, his path was laid out by a single patient with whom he bonded during his internal medicine rotation and the “Thank you” card the patient’s wife sent Myhand after his passing. Anticipating such relationships with future cancer sufferers placed Myhand in his field. His path has not been direct, but his destination was clear: “One of my goals was always to be a community oncologist. I like direct patient care the most,” says Myhand.

Since January 2013, cancer patients in Georgetown, Ky., have had access to this committed and compassionate physician. The area’s residents have also had access to the wisdom and competence gleaned from Myhand’s 23 years in the field, not the least of which included stints as chief of the Hematology/Oncology Department at Walter Reed Army Medical Center, Brooke Army Medical Center and later, the San Antonio Military Medical Center. As he rose through the medical ranks, Myhand continued to see patients, and ultimately concluded, “The administrative stuff was fun, but what I enjoyed the most was seeing patients.”

From Military to Community Hospital

Myhand was accepted to and graduated from the US Military Academy at West Point and attended medical school courtesy of the Army. He performed 21 years of service, primarily in Washington, DC, and San Antonio. Both of these military medical centers are also training facilities, therefore Myhand spent considerable time training oncologists and hematologists. While in this academic role, he served as faculty, assistant program director, and later, program director of the Hematology/ Oncology Fellowship training program in San Antonio. While stationed there, he volunteered in 2007 to deploy to Iraq with a Combat Support Hospital in the capacity of an internal medicine physician. Following this, Myhand had the option of pursuing a civilian career as a medical administrator but instead chose private practice at a community hospital.

The move to Georgetown was carefully considered by Myhand and his wife Nikki. With much of their family in the eastern half of the US, central Kentucky made sense. “Georgetown seemed like the ideal place,” he recalls. “It was a smaller town but not too small, and its proximity to Lexington was a big advantage.” He values being near UK’s Markey Cancer Center (MCC) and has an affiliation with MCC that allows him to serve his patients better. “Cancer patients need more than just medical oncologists, they need surgical and radiation oncologists, tumor imaging radiologists, etc.,” he notes.

Georgetown Community Hospital (GCH) has been all that Myhand hoped for, and the setting complements the nature of oncology practice. For him, “When you are dealing with cancer patients, all the superficial things that we walk around with, that separate us, go away. You really get to know patients, and they really get to know you.” The relationships that come so easily under these conditions are further facilitated by the community hospital setting. As the sole oncologist at GCH, Myhand follows most of his patients throughout their cancer treatment and then sees them for their annual check-ups. His patients live in his town, or in the rural areas nearby, and may even be his neighbors’ relatives.

Familiar Patients and a Dynamic Field

Myhand’s patient population is solely adults, many of whom are over 60. This mirrors the population he served in the military. Military retirees (with 20 or more years of service) and their family members are eligible for cancer treatment at the major military hospitals – Walter Reed, San Antonio – and tend to go there rather than to their local VA. Myhand saw many of the World War II generation early in his career at these facilities. Like those patients, his current patients’ most common needs are related to breast, colorectal, prostate, and lung cancers. He also sees patients for lymphoma, multiple myelomas, and as a hematologist, blood disorders.

Myhand notes that cancer treatment has changed dramatically over the last eight to 10 years. He sees the sum of that making it “much less harsh today than in the past.” The implications of this are multiple: patients are tolerating treatment better, and their quality of life during treatment is improved. Finally, relatively healthy elderly people stand a better chance of being able to take advantage of treatments. A 70-year-old cancer patient need not succumb to the disease, when newer, gentler treatments can give them more years with their family. He adds that geriatric oncology is an emerging field, and many elderly patients are more likely to die of old age than to die of their cancer.

Advances in personalized oncology care “have really been exploding over that time period,” he notes. There is a great deal of biological heterogeneity in cancer cells, so two patients with the same diagnosis, receiving the same treatment, can have totally different outcomes. Tumor profiling with molecular techniques, particularly looking for so-called driver mutations, are illuminating how to treat those patients individually. This process, which some call “interrogating the tumor,” helps physicians determine what makes an individual cancer more susceptible to a course of treatment and then come up with the best treatment plan for that individual patient. Myhand is excited about such processes that are “getting even more elegant on a molecular level now.”

Being the sole oncologist/hematologist in a community hospital is no step down for Myhand, rather the realization of a personal goal predestined by his experience with that cancer patient early in his medical school rotations. The gravity of a cancer diagnosis and the subsequent treatment makes for a special patient-physician bond. “What I have learned is that patients do not expect miracles from you, but they want to know that someone really cares,” says Myhand.

Rick Myhand, MD, could be anywhere in the oncology world, but he wants to be the cancer doctor for a tight community. He wants to see patients who will return to him through the course of their treatments, and to help keep families intact for as long as possible. He puts it simply, “I could not imagine being another type of physician.” And, yes, he still has that 30 year-old “Thank you” card.

I HAVE LEARNED THAT PATIENTS DO NOT EXPECT MIRACLES BUT DO WANT TO KNOW SOMEONE REALLY CARES.