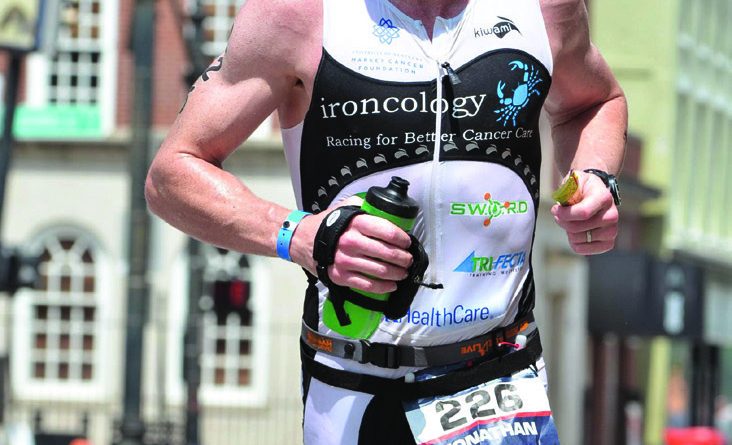 LEXINGTON The easiest part of Dr. Jonathan Feddock’s daily regimen is training for a full scale Ironman triathlon, he says. That’s an open water 2.4-mile swim, a 112-mile bike race, followed by running a marathon distance of 26.2 miles. That’s a total of 140 miles, all in one day, competing against highly conditioned fellow amateurs and elite professional athletes.

The most challenging part, Feddock says, is maintaining the blog, Twitter, Instagram accounts, and website, (www.ironcology.org) that have propelled his idea of “Ironcology” into a crowd-sourcing phenomenon for the Markey Cancer Foundation (MCF) at UK Healthcare.

Being a radiation oncologist at UK’s Markey Cancer Center (MCC), father of two boys, and husband to wife, Shannon Florea, MD, who is a rheumatologist, are “in-between there somewhere,” he says.

Feddock came to UK on a track scholarship as an undergraduate studying pre-med. After two years, he gave up competitive collegiate running to focus on academics and getting into medical school. He was accepted at the UK College of Medicine, met his wife there, and matched for residency as well. On staff at UK since 2012, Feddock concentrates his oncology practice on breast, ovarian, uterine, and cervical cancers, plus some pediatric oncology patients.

Ironcology is the name Feddock gave to his effort to raise funds for a new brachytherapy suite at MCC. His goal was to raise a $200,000 down payment on the $1.2M renovation that will bring brachytherapy treatment and recovery under one roof at Markey, along with the purchase of new equipment, such as a new CT scanner and new radiation planning and delivery equipment. “A new, consolidated brachytherapy suite will provide a safer, faster, and better patient experience,” says Feddock.

The idea to turn his passion for competitive triathlons into a fundraiser came to Feddock from a news story in New York where a local TV anchorman started in last place in the New York City Marathon and received pledges for each runner he passed. Feddock recalls thinking, “I can do that, but probably pass a lot more runners.”

He took his idea to Stephanie Herron, CEO of MCF, who saw the potential of the fundraiser and suggested the crowd-sourcing format, the first of its kind for UK Healthcare and the University of Kentucky. “We were looking for an idea that social media could get hold of, something that donors of all levels could rally behind. With Dr. Feddock’s passion for his patients, his work, and triathlons, it all came together very easily,” says Herron.

Feddock started with just a blog and a very simple website. He created the Ironcology logo “in about 30 minutes on my PC,” he says. Next, came Twitter and Instagram accounts. “My blog was mostly about my patients,” says Feddock, “with a little about my training.” Slowly the blog and website attracted more visitors and hits, averaging about 200 per day. When UK head basketball coach John Calipari put a post about Feddock and Ironcology on the coach’s Facebook page, Ironcology received 1800 hits in three hours. “That was huge,” says Feddock.

Then a momentous event happened. IRONMAN, the international organizer of Ironman triathlons, learned about Feddock and Ironcology and anointed him the “featured runner” of the Ironman event in Louisville in August 2014. Feddock was chosen to give the pre-race pep-talk to all 2100 competitors the night before, where he described Ironcology and his motivation for competing. The next day, race day, a camera crew on boat, on land, and on bike followed Feddock throughout the entire race. It helped him stay focused, he says. “There were times when I felt like walking, but then I saw the camera man and kept running.”

Additional funds have come from donations to the MCF from individuals who read his blog, follow him on twitter, or visit the Ironcology website and are moved by what he is doing. “I’ve been contacted by people across the country and even by people coming up to me in Kroger,” says Feddock. “One woman said, ‘You don’t know me, but I know you. You’re treating the little girl on my street for cancer. Let me give you a check.’ I accepted it but made sure she made the check out to the Markey Cancer Foundation.”

“The biggest surprise has been the number of people who have reached out and supported me,” says Feddock. Crowd-sourcing success comes from awareness. “My fellow physicians have supported me in many ways, through donations and awareness.” Feddock also credits the MCF for helping him manage the donations, receipts, website, and all the details. “Being the first crowd-sourcing venture here, we were learning along the way,” he says.

To date, Ironcology has raised over $120,000 in donations, large and small. The board of MCF has pledged $75,000 from proceeds of a recent fundraising event in which some of Feddock’s supporters contributed high end auction items. Feddock is confident that the $200,000 will be achieved before his next goal, which is qualifying for the big Ironman in Kona, Hawaii, and competing for the world championship. He also plans to start a local Ironcology group of cancer survivors who use triathlons and athletics to help them recover from cancer.