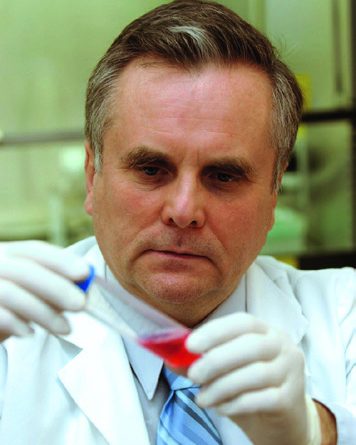 Myers began his health care administration career as a family practitioner in 1991, but left private practice in 1996 to begin a 20-year career in administrative roles. His extensive experience spans all aspects of health care delivery, including a physician hospital organization, management service organization, and health insurance companies. He was also an executive leader at Wishard Health Services, one of America’s five largest safety net health systems, and was an adjunct faculty member for Indiana University in Indianapolis, teaching Healthcare IT in the Health Care Administration master’s program.

Catherine A. Zoeller has been chosen as vice president of operations for the Baptist Health Medical Group, working closely with Myers, to provide support for employed physician practices and help the group accomplish its strategic goals.

Goff is also a graduate of the University of Kentucky School of Medicine. He completed fellowships at The Ohio State University Medical Center and Linder Center of Christ Hospital in Cincinnati.

The physician earned a BA in chemistry with honors from Grinnell College in Grinnell, Iowa. He received his MD from Rush Medical College in Chicago, Illinois, and completed his internship and residency in internal medicine at the University of Missouri-Columbia School of Medicine in Columbia, Missouri.

Cao, who is board-certified in internal medicine, has worked in many areas, including private practice, as a hospitalist, as an emergency department physician, and as a senior internist for National Health Corp Physicians, where he was a proctor for medical, pharmacy, and nurse practitioner students.

Cao is a member of the Indiana State Medical Association and board member of the Vietnamese-American Community in Louisville. His past community leadership experience has included membership in the Monitoring Committee of the Jefferson County Board of Education in Louisville from 1992–1993 and was on the board of the Americana Activity Center in 1992. He has received a Louisville Community Service Award from Mayor Jerry Abramson.

The University of Louisville Department of Pediatrics is adding 18 physicians to its faculty roster, bringing the total number of pediatricians and pediatric specialists to 186 as of July 1.

Tracey Wagner, MD, instructor and clinician in pediatric emergency medicine, completed a pediatric residency at the University of Louisville. She received her medical degree in 2011 at The Ohio State University.

Anita Yalamanchi, DO, instructor and pediatric emergency department clinician, completed a pediatric residency at University of Louisville. She received her medical degree in 2011 at The University of Pikeville Kentucky College of Osteopathic Medicine.

General Pediatrics – Matthew D. Kinney, MD, assistant professor in general pediatrics, completed a pediatric residency at Northwestern University/Children’s Memorial Hospital in Chicago. He received his medical degree in 2008 at the University of Louisville School of Medicine.

Kendall Purcell, MD, MPH, instructor in general pediatrics, completed a pediatric residency at Children’s National Medical Center. She received her medical degree in 2011 at the University of Louisville School of Medicine.

Hematology/Oncology & Bone Marrow Transplant – Michael Angelo Huang, MD, assistant professor in pediatric hematology/oncology & bone marrow transplant, completed a pediatric hematology/oncology fellowship in 2012 at Penn State University. He received his medical degree in 2004 at the University of the Philippines and completed his pediatrics residency in 2009 at Albert Einstein Medical Center in Philadelphia.

Prasanthi Pasala, MD, has joined UofL Department of Pediatrics as an instructor and will practice primarily at Memorial Hospital and Health Care Center in Jasper, Ind. Pasala completed a pediatric residency at Kosair Children’s Hospital. She received her medical degree in 2011at the University of Cincinnati.

Aurelia C.H. Wood, MD, has joined the UofL Department of Pediatrics as chief resident and physician on the Pediatric Hospital Medicine service. She completed a pediatric residency at UofL in 2014 and she received her medical degree in 2011 at the Wright State University Boonshoft School of Medicine.

Neonatology – Sarah Korte, MD, assistant professor and neonatal hospitalist, completed a pediatric residency at University of Louisville. She received her medical degree in 2010 at the University of Missouri-Columbia.

Weisskopf Child Evaluation Center – Maria Romelinda L. Mendoza, MD, has joined Weisskopf Child Evaluation Center as an assistant professor. Mendoza completed a pediatric residency at Penn State Children’s Hospital and a developmental and behavioral pediatrics fellowship at Cohen Children’s Medical Center of New York. She received her medical degree in 2005 at the University of the Philippines.

LOUISVILLE The University of Louisville Department of Pediatrics is reorganizing its general pediatrics division, positioning itself to respond better to the new health care marketplace and needs of the community’s children.

The division provides primary care services to children in Louisville and Campbellsville, Ky., and helps train many of the university’s student doctors, nurses, dentists, psychologists and social workers. In 2013, its 22 pediatricians were responsible for more than 22,000 patients. Approximately 12 percent of the total pediatric population in metro Louisville identifies a UofL pediatrician as their primary care provider.

“Healthcare reform has placed a greater emphasis on primary care, where providers can promote health and safety,” said Gerard Rabalais, MD, MHA, chairman, University of Louisville Department of Pediatrics. “Pediatric programs like ours may be the best place to achieve success with health care reform since we have the longest runway to influence attitudes about prevention and healthy lifestyle.”

A number of changes are planned for the coming months:

The department is closing its office at Floyd St. and Broadway on July 1 and creating a single expanded downtown practice, the Children & Youth Project (C&Y), located a few blocks away.

Not only will C&Y offer all of the services previously offered at the Broadway office but the expanded downtown clinic will serve as a medical home with a wider array of onsite ancillary services: social work; psychology; dental care; home health; speech therapy; WIC nutrition services; and legal counseling.

This summer, the UofL Department of Pediatrics will partner with an east Louisville pediatric practice, bringing the number of general pediatricians and nurse practitioners in the department to 36.

The department will also expand its Campbellsville, Ky., practice later this summer, partnering with Taylor Regional Hospital to open a satellite office in Columbia, Ky.

Plans are also underway to provide general pediatric care in the West End of Louisville.

All of the Louisville pediatric practices will soon operate as a network. That means patients will have a medical home for routine visits as well as access to urgent care at any of the other Louisville general pediatric practices. The network also will enable families to access ancillary services headquartered at C&Y and specialty care by UofL pediatric specialists.

The department’s reorganization also ensures that residents, medical students and trainees from other programs will have places to learn primary care pediatrics. Historically, trainees have spent time in community pediatric practices but these practices may struggle to continue hosting students because of changes in the health care landscape.

She previously worked as a nurse practitioner with First Urology in Louisville. Nurse practitioners are advanced practice registered nurses who diagnose and treat a wide range of health problems.

LOUISVILLE Baptist Health has added a Shelbyville urgent care center to its family of services, strengthening and broadening its scope of health care in the Louisville area.

MaxCare is the only urgent care center in Shelby, Henry, and Spencer counties, and its physicians and nurse practitioners see patients from each of those communities, as well as from Anderson and Franklin counties.

Smith, who serves as medical director for MaxCare, said that joining Baptist Health is a positive change for his practice and for the people of the Shelbyville area. Having worked in the emergency room at Baptist East (now Baptist Health Louisville) for 10 years, Smith has strong ties with Baptist Health.

LOUISVILLE Mariusz Ratajczak, MD, PhD, DSci, has been selected to receive the prestigious Karl Landsteiner Prize from the German Society for Transfusion Medicine and Immunohematology. Ratajczak holds the Henry M. and Stella M. Hoenig Endowed Chair at the University of Louisville.

The Landsteiner Prize is given by the society to a doctor for outstanding achievements and research in the fields of transfusion and/or immunology. The prize is named after Karl Landsteiner, an Austrian biologist and physician. In addition to distinguishing the main blood groups, Landsteiner also discovered polio along with several other researchers and received the Nobel Prize in Physiology or Medicine in 1930. Landsteiner is recognized as the father of transfusion medicine. Previous recipients of the Karl Landsteiner Prize include Nobel Prize laureate Rolf Zinkernagel (Basel), Karl Blume (Seattle) and Stephanie Dimmeler (Frankfurt).

Ratajczak was honored for his outstanding achievements in the characterization of mechanisms involved in the mobilization of hematopoietic stem cells and the discovery of very small embryonic like stem cells in the adult tissue.

An internationally known specialist in the field of adult stem cell biology, his 2005 discovery of embryonic-like stem cells in adult bone marrow has potential to revolutionize the field of regenerative medicine. The discovery may lead to new treatments for heart disease, eye disease, diabetes and neurodegenerative disorders, as well as provide insight into the development of many forms of leukemia.

In addition to his endowed position, Ratajczak is a professor in the Department of Medicine and the director of the Developmental Biology Research Program and of the Research Flow and Sorting Core Facility at the University of Louisville’s James Graham Brown Cancer Center.

In addition to receiving the Karl Landsteiner Prize, Ratajczak has also been invited to deliver an opening lecture on Sept. 9 during the society’s annual meeting in Dresden, Germany.

LEXINGTON UK HealthCare and Norton Healthcare are building upon their history of collaboration to expand research and educational collaborations between the two institutions, with the goal of improving health and health care for all Kentuckians.

Beginning July 1, educational and research initiatives between UK and Norton will be led by Dr. Stephen Wyatt, who most recently served two successful terms as the founding dean of the University of Kentucky College of Public Health. Wyatt will return to the UK College of Medicine, with joint appointment as vice president for research at Norton Healthcare.During Wyatt’s tenure as dean, the College of Public Health experienced tremendous growth in faculty, staff, students, extramural funding, and reputation, with the college now ranked 25th nationally by U.S. News and World Report. Wyatt will leverage his expertise in collaborative research and education to guide the partnership efforts between UK and Norton Healthcare.

Facilitating collaborative research is a key component of the partnership and will benefit Kentuckians by expanding access to novel clinical trials only available at academic medical centers that, like UK, have major federal research designations in cancer, aging and translational science, while simultaneously expanding access to industry-sponsored trials at Norton Healthcare. The collaboration will also allow researchers at both institutions to combine expertise and resources and better recruit diverse research participants from a larger area of Central Kentucky.