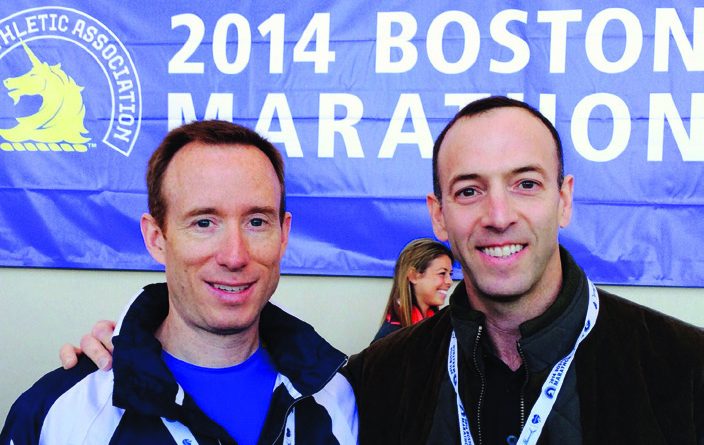 The day started as nearly 35,000 runners loaded hundreds of school buses in Boston Commons to make the one-way trip to Hopkinton, starting point of the Boston Marathon. There would many nervous folks traveling as this was the oldest, most prestigious races in the world. The best runners on the planet would be present. Each of us was coming from a town or a city where we were the top dog. Now, we would be anonymous among a sea of super-athletes. Heck, I had just won an Ironman triathlon three weeks before in Florida; but here I would hope to break into the top 10 percent.

This would be my fourth Boston Marathon. I may qualify every year, but I pick certain years to go based on friends who would join me. These race plans began almost one year prior when my residency buddy called. Scott McLean was one of those supermen of whom I spoke. He ran cross country at Michigan 20+ years ago and talked me into my first marathon. I was 32 years old at the time and in Otolaryngology residency training at the Mayo Clinic. “Make sure you have a qualifying marathon time,” he said this time. We were both 45 years old and only needed to run a 3-hour 25-minute time to qualify.

He called to make sure that I was qualified and signed up in September. This would be the biggest Boston Marathon ever after what happened in the 2013 bombing. This would represent athletes taking back their sport and not letting two zealots change how we live.

On race day, we rode together out to the start. No bags, no packs, no extra anything. We wore clothes that we intended to throw away. The rules were tight to protect the event, the spectators, and the runners. As we arrived in Hopkinton, we noted tens of thousands of runners getting ready. We were fenced in and quarantined off. Fences marked where we were to stay. There were police, sheriffs, marshals, FBI, ICE agents, and soldiers protecting us. It was an awesome presence.

We loaded into corrals based on our qualifying times. I was in Wave 1, Corral 5 based on my seemingly average qualifying time of three hours from the Derby Marathon in Louisville. There were nine corrals per wave with 800 to 1000 runners in each corral. We were packed in, shoulder to shoulder, by volunteers. The Boston Marathon is strict about controlling the corrals so that runners are seeded appropriately (each runner next to another who would run the same pace). I would leave the gate with runners going 6:40/mile pace. There would be no passing for hours.

After the gun, I took two minutes to get to the start line. Thousands of marathoners were seeded ahead of me. We were flying downhill at the start. It seems like a good idea to run downhill, but it burns up your quads as you “hold the brakes on” to control your pace. It’s actually harder. Boston is a tough course because of this. We go downhill for eight miles, then it’s flat to rolling, and finally in the last third of the marathon, trouble comes with multiple hills. By this time, your legs are toast and the hills keep coming. I’ve laid an egg (3:24, 3:28, 3:20 in ‘12, ‘07, ‘02, respectively) on all of my previous Boston trips because of this course setup.

My Garmin GPS had me at a 6:55/mile through mile 14. I treat racing like a formula or a math calculation. I have calculated several factors: 1. My lactate threshold (where my body goes anaerobic), 2. How fast I go at that heart-rate, and of course, 3. How long I can run at that heart-rate. The goal is to park my heart-rate at the point of anticipated leg muscle failure. Boy, does that hurt, though!

The race was exhilarating. The fans were lining the course, sometimes 10-people deep. Screaming. Yelling. Cheering. They gave out extra water, oranges, popsicles, etc. The police presence was most noticeable with placement of law enforcement every 25 feet in some fan-filled areas. Remember, this a point-to-point marathon, so fans are spread across 26.2 miles. The crowd support was awesome! We were taking back the Boston Marathon. It would return to be that glorious world-renowned event.

As I hit the hills, my speed faltered as expected. I lost a minute on hill number one, then two minutes on hill number 2, and so on. It hurt and there was nothing I could do about it but hold intensity and heart-rate at >163 bpm. My legs already felt like a nail gun had shot my thighs. That feeling would only last a week. Ouch.

Holding it together, I tried to hold a 7:15/mile pace to the end. Four miles, three, two, one. Finish line!

I did it! I finished at 3 hours 7 minutes and enjoyed those last yards down Boylston Street, where the bomb had gone off last year. The fans’ cheering echoed between buildings as we ran that last half mile and crossed the line. A medal awaited each of us, but the greatest memory was turning that site of tragedy back into a moment of joy for the finishers.

TWO KENTUCKY PHYSICIANS COMPETE IN THE BOSTON MARATHON, ONE YEAR AFTER THE TRAGIC BOMBING AT THE FINISH LINE