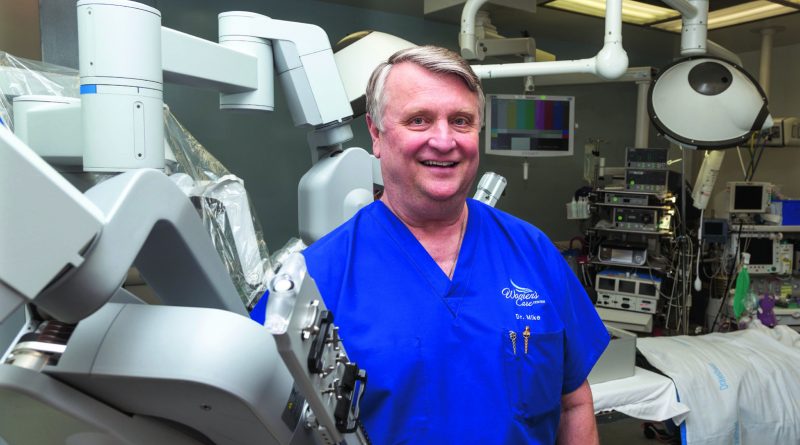 Understandably, much of a patient’s concern with surgery is what happens when it’s over. How long will I be in pain? How much will it hurt? How big will the scar be? So anytime a new surgical procedure or technological advancement reduces even one of these concerns, it’s significant. Hysterectomy performed robotically using the daVinci Surgical System with a single-site incision is a unique example of a procedure that reduces pain and scarring and even offers benefits to the surgeon.

Michael Guiler, MD, sole practitioner at Personal Healthcare for Women in Lexington, says that word is spreading about the positive impact of the daVinci single-site procedure of hysterectomy patients.

“The single site is relatively new but there’s a lot of exposure out there, so we’re getting a lot of questions,” says Guiler, who developed a large referral base over his 34 years of medical practice. “By the time a patient is referred to me, they know how I approach things. They do ask about the robot and if it’s the right thing for them.”

More often than not, Guiler’s answer to that question is “yes.” Guiler, who delivered nearly 8,000 babies before ending his obstetrics practice in 2006 to focus solely on gynecology, says most hysterectomies can be accomplished with the single site procedure. He cites incidence of large fibroid tumors or extremely complicated endometriosis as examples of conditions that increase the difficulty and length of the procedure to the point that it might be no longer advantageous.

While more than 50 percent of the hysterectomies in the United States are still preformed with open procedures, single site is the norm at Guiler’s practice, which he runs with his wife Sherry Guiler, DNP, APRN.

“I prefer the robotic approach because I think it’s better for the patient and it’s easier for me, so we both benefit,” says Guiler who performs the majority of his robotic assisted surgeries at Saint Joseph East Hospital in Lexington.

Guiler credits the opportunity to perform the robotic procedure, while sitting at a console rather than standing in an awkward position for up to two hours at a time, with reducing his fatigue and increasing his mental focus.

“The most challenging part of the procedure is getting used to not being at the patient’s side when you do the surgery,” says Guiler, who attended medical school and completed his residency at the University of Kentucky. “You give up contact sensation for visualization. But after you’ve done a few cases, you can see so well your feedback tells you that you can feel even though you’re not there. That’s how good the visualization is. You can see better with the robot than you can if you open the patient. With the human eye, there are limitations in visualization of the surgical field, but with the robotic camera it magnifies using high definition technology. The single site procedure typically begins with a 2.5 centimeter incision through the navel. That small incision includes four ports. One has a camera, one has an assist, and then there are two arms with which to operate.

“For patients, it’s better in terms of pain; it’s shorter recovery; it’s better cosmetically; and it’s less fearful when you wake up and just have only one very small incision,” Guiler says. “From the physician standpoint, it’s technically a little more difficult. There’s another learning curve when doing robotic surgery with multiple ports than with only a single port. You have a smaller range of motion. You have to be focused on one area of the surgical field at a time.

“That gives you somewhat of a limitation as far as the type of surgery you do. It wouldn’t be advantageous for the patient in complicated cases because of the time involved. But for the typical indications for hysterectomy or removing an ovary, single site is a very good choice for the patient if they meet the criteria,” says Guiler.

While the cosmetic benefit of the small incision are similar in both laparoscopic and robotic procedures, patients report significantly less pain associated with the robot. That is directly correlated to the markedly reduced trauma to the abdominal wall. “When you have a straight stick laparoscopic instrument, you have to grind and move it around, which takes all the tissue with it, “Guiler says. “When you do it with the robotic instrument, it has a fulcrum point so there’s no tension or trauma to the abdominal wall where the instrument goes through.”

Having performed a dozen single-site hysterectomies to date, Guiler is quick to champion technology that provides so many benefits to both patients and surgeons. “I just feel like it’s been one of the most rewarding parts of my practice to be able to change to robotic surgery,” he says.