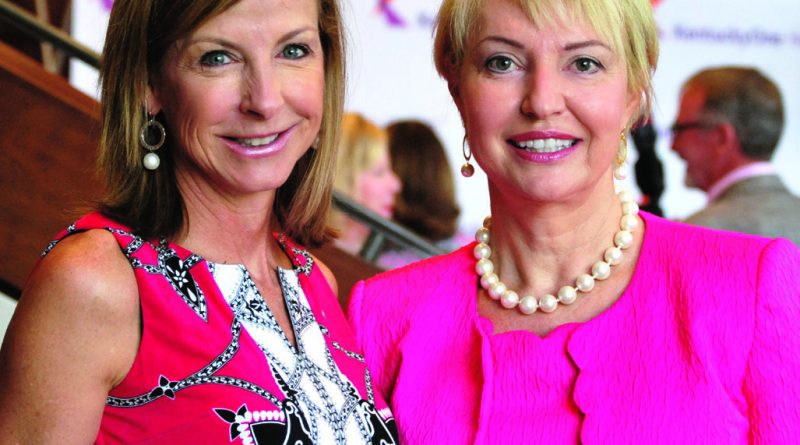 The philanthropic support of Charles A. Osborn, Jr., was made to honor his wife, Mary Taylor “Mimi” Osborn, who passed away at Baptist Health Louisville in 2014 after a 10-year battle with breast cancer. Mimi Osborn was an active supporter of the arts, education, and Louisville’s natural resources and history.

The Center has renovated medical offices and exam rooms for medical oncology physicians, including improvements to the outpatient infusion center, where more than 14,000 chemotherapy infusions are administered annually; an expanded radiation therapy facility, including the BrainLab Novalis Shaped Beam, which delivers highly focused radiation therapy, most commonly used for cranial cases plus lung, liver, and spine; on-site relocation of the hospital’s PET/CT scanner; a new Cancer Resource Center that provides educational information and hosts support groups for patients and their family members; and additional space to offer multidisciplinary clinics and genetic counseling, as well as conduct cancer research.

“Our focus is the future and the impact we can make on the care of cancer patients. That begins here, today,” said Bob Linker, MD, medical director of Oncology Program. “’Family is spoken here’ is a saying we have at Baptist.”

The largest donation came from Cathy and Don Jacobs, who gave $100,000. In addition, Marylou Whitney and her husband, John Hendrickson, and the E.O. Robinson Mountain Fund each gave $50,000, with the Robinson gift designated to support people from 30 Eastern Kentucky counties, Wurzback said.

Additionally, a pledge of $25,000 came from the Creech Family Foundation in memory of Virginia Creech, who helped start the work at Cardinal Hill.

Money raised during the telethon helps cover care Cardinal Hill provides but for which it doesn’t get paid. That uncompensated care usually totals more than $2.5 million a year.

LOUISVILLE In recognition of Donate Life Month, University of Louisville Hospital, part of KentuckyOne Health and one of the country’s largest organ donation facilities, and Kentucky Organ Donor Affiliates (KODA) honored organ donor families in a special ceremony on Tuesday, April 29, 2014, recognizing those who have given the gift of life through organ and tissue donation. Families planted flowers in honor of their loved ones at the hospital’s Memorial Garden. A new Donate Life flag was raised in front of University of Louisville Hospital by family members of organ donor Sheldon Sharpe.Mark Pfeifer, MD, invited donor families to help raise the new KODA flag in honor of their loved ones. Pfeifer noted, “Our trauma team works to save everyone that comes through our doors. It’s not always possible, but from loss comes hope that other lives may be impacted in very meaningful ways. Your loved one and your family are part of our family forever.”

LEXINGTON Saint Joseph East, part of KentuckyOne Health, shared construction plans on a $1 million expansion and renovation of the hospital’s breast care center on May 7, 2014. The project is funded in part by the Saint Joseph Hospital Foundation and will include the new imaging technology digital breast tomography, often referred to as 3D mammography.

“3D mammography, tomosynthesis, is an exciting new technology in breast imaging for enhanced detection of early breast cancer,” said Kimberly Stigers, MD, radiologist. “We are grateful to KentuckyOne Health and the Saint Joseph Foundation for making this technology available for our patients.”Tomosynthesis is a technique that uses motion to better exhibit relevant anatomy while allowing the superimposed structure to fade. “Mammography is the most cost effective exam proven to reduce mortality from breast cancer,” said Marta Kenney, MD, radiologist. “We stand behind the recommendation that women get a yearly mammogram beginning at age 40. Mammography saves lives.” The expansion will add nearly 2,100 square feet to the existing breast care center. The extra space will allow for an additional mammography suite with private dressing rooms and waiting areas for family members. The availability of additional dressing rooms and diagnostic areas will better accommodate and assist with the transition between patients and procedures. Breast screening and bone densitometry services will move to a space separate from areas where patients receive diagnostic services, including ultrasounds and biopsies.