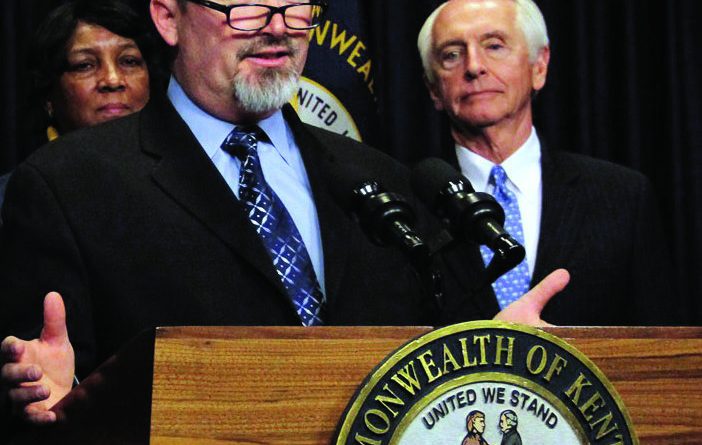 In 2012, Kentucky launched an attack on its No. 1 cancer killer among non-smoking men and women.

That year was the first time funding was granted for the Kentucky Colon Cancer Screening Program (KCCSP), a population-based, public health initiative installed by the General Assembly in 2008 to provide colon cancer screenings for low-income, uninsured Kentuckians ages 50-64. The program consists of a network of state, regional, and local health professionals whose mission is to reduce new cases of colon cancer as well as the disability and death associated with colon cancer.

With $1 million from the state over two years, and a $1 million match through a public-private partnership with the Kentucky Cancer Foundation, the program officially launched in ten regions across the state encompassing 36 counties in early 2013.

The Kentucky Public Health Department manages the program, which provides a stool-based test for average risk patients and a colonoscopy for those deemed higher risk.

Since it began, more than 1,000 Kentuckians have received screenings. Of those, 151 have had pre-cancerous polyps found and removed, and eight cancers have been identified and treated.

“It’s not exaggerating to say this program saves lives,” Gov. Beshear told a crowd at a press event on March 13 that was organized by the Colon Cancer Prevention Project, a non-profit working in Kentucky and surrounding communities to end colon cancer.

Kentucky has the highest incidence rate in the country, Beshear said.

Beshear pointed to the fact that since 2007, Kentucky’s colon cancer incidence rate has fallen by 12 percent, and its mortality rate has also fallen by 16 percent.

In an attempt to continue this reduction in cancer incidence and mortality, Beshear allocated $1 million for the KCCSP in his 2014-2016 budget, which would again be matched through the public-private partnership with the Kentucky Cancer Foundation. After rigorous debate, funding for the KCCSP was included in the 2014 budget.

As executive director of the Colon Cancer Prevention Project Continuing, I believe this program is important to Kentuckians. It saves lives, allowing for precancerous polyps to be caught and removed before they turn into cancer. It is a wise use of money, with a 100 percent match by the Kentucky Cancer Foundation. And it is needed. Even with the Affordable Care Act, nearly 400,000Kentuckians will remain uninsured.

Tamara McNabb, who received a screening through the KCCSP, said she wants to see it continue. “I think it’s important to keep this program around because it’s going to save lives,” McNabb said.

Whitney Jones, founder of the Colon Cancer Prevention Project and co-founder of the Kentucky Cancer Foundation, said no Kentuckian should go without proven prevention and early detection services.

“Our progress in radically improving Kentucky’s colon cancer statistics demonstrates the impact of implementing evidence-based, accessible, and pragmatic screening services,” he said. “Our broad statewide partnership’s success is a model for states battling the unacceptable colon cancer statistics. They are to be congratulated.”

SINCE IT BEGAN, MORE THAN 1,000 KENTUCKIANS HAVE RECEIVED SCREENINGS. OF THOSE, 151 HAVE HAD PRE-CANCEROUS POLYPS FOUND AND REMOVED, AND EIGHT CANCERS HAVE BEEN IDENTIFIED AND TREATED.

Andrea Shepherd is the executive director of the Colon Cancer Prevention Project. For more information, visit www.ColonCancerPreventionProject.org, kentuckyCancerfoundation.com, or KCCSP at chfs.ky.gov/dph/ColonCancer.htm.