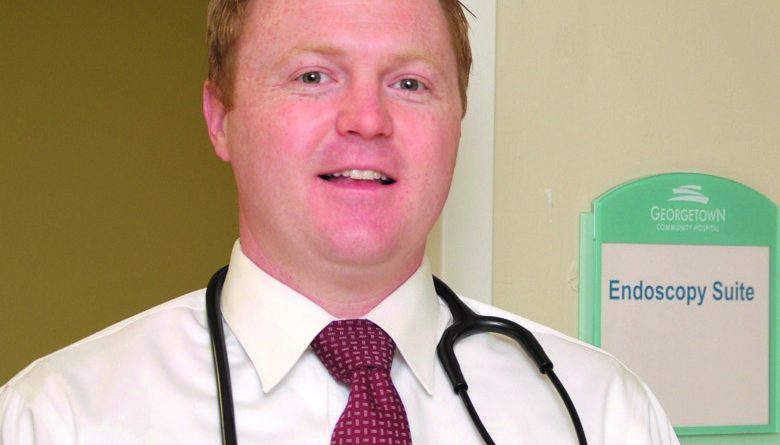 When Justin W. Case, MD, began to practice gastroenterology and hepatology at Georgetown Community Hospital in August 2013, he was coming home. The Grant County native has family in Georgetown and did his undergraduate and internal medicine residency at University of Kentucky, but he did medical school and special training at the University of Cincinnati. Case did not come home alone, however. He brought to Georgetown Community Hospital his expertise with endoscopic ultrasound, a technology that is dramatically increasing the amount of detail that physicians can discern in the upper digestive tract. The hospital has one of only two such tools in the region, and in Case’s hands, it is changing how patients proceed with the news of abnormalities in their GI and biliary tracts.

Case’s practice, Gastroenterology and Hepatology of the Bluegrass, serves adult patients, most of whom arrive with “irritable bowel syndrome or gastro-intestinal complaints like peptic ulcers, abdominal pain, constipation, and diarrhea.” He also sees patients for hepatitis and chronic liver disease. Most of his patients are from the Scott and Bourbon county area, but he increasingly sees patients referred up from Lexington to take advantage of the endoscopic ultrasound.

Since medical school rotations, Case’s knack for gastroenterological procedures has guided his career choices. At UC he completed a “one year program on advanced training in endoscopic ultrasound, ERCP, and liminal stint placement.” This is where he first gained familiarity with the endoscopic ultrasound.

The endoscopic ultrasound tool has an ultrasound imaging tip. As Case says, “It allows us to view the GI and biliary tracts from the inside, which provides a better visualization than external ultrasound.” If a lesion is detected, a biopsy can be pulled through this tip, also. The half hour scans provide great detail; features as small as a millimeter can be discerned. Inserted just like a standard endoscope, the endoscopic ultrasound tip is only slightly larger. Patients might notice this, Case explains, so “Sedation is slightly heavier than normal GI scoping, but few patients need to be intubated.”

Bringing the endoscopic ultrasound to Georgetown will help local patients in several ways. Primarily, it is used to complement CT scans. “Sometimes people will have CT scans that will show details that they are unclear how to follow-up with; this provides a better idea of what they are dealing with,” Case says. Case’s work in pancreatic imaging – a specialty of his – will be enhanced: “Pancreatic masses and cysts, pancreatitis, and biliary obstruction (caused by stones) will be more easily diagnosed in my office,” he notes.

The potential for broad use is great. Endoscopic ultrasound also allows for ready, detailed screening for pancreatic cancer, esophageal cancer, and gastric cancer, as well as benign tumors of the upper gastrointestinal tract. Additionally, it can be used to identify malformations and masses in the bile ducts and pancreatic ducts.

Case is excited to be on the forefront of gastroenterological imaging and to evangelize about the value of the endoscopic ultrasound. He says, “It’s very helpful, not necessarily new, but becoming increasingly widespread.” He stresses, however, that colon screenings can do more to reduce GI cancers than any tool. He wants to see people increase their colon cancer awareness. He notes, “The biggest concern overall is that some patients are reluctant to get routine colonoscopies. The key is to get it done early so that you don’t find a cancer, you find a polyp. The polyp is where a cancer would come from; we want to remove it before it has the chance to become a cancer.” He reminds that routine screening should begin at 50.

As a hepatologist, he is also watching progress with hepatitis. Chronic viral hepatitis is becoming much more curable, especially hepatitis C. Case says that “The rate at which new medications are becoming available is making it a much more curable disease than it has been in the past.” He estimates, “By the middle of next year, over 90 percent of hepatitis C sufferers will be curable.”

Case knows he is bringing something valuable to the Bluegrass; the only other endoscopic ultrasound in the area is at UK. He says, “It’s somewhat unusual for it to be offered at a smaller hospital like this,” but as he builds his practice, word will spread of its value and local availability. Patients seeking gastroenterological and hepatological treatment in Georgetown can be glad Case returned home.