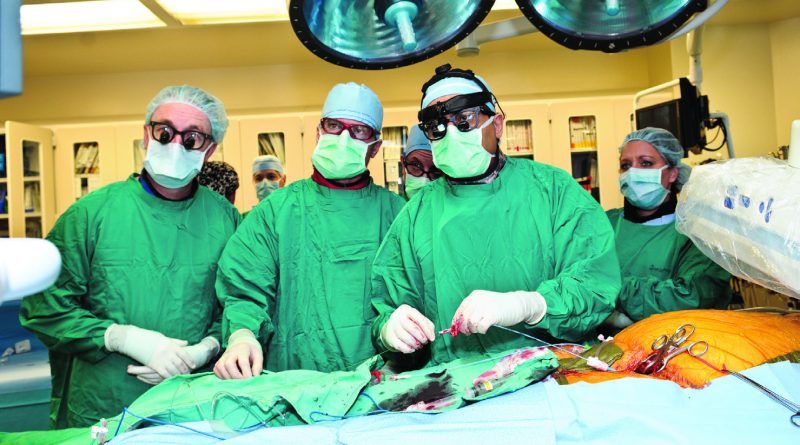 LEXINGTON A healthy heart has a beat and a rhythm all its own, four chambers working in unison to keep the life blood pumping. It’s fitting, then, that one of the newest developments in the care and treatment of cardiac patients comes in the form of a four-person physician team, working cohesively to perform the most intricate of procedures.

Together, the four physicians merge their specialties to bring expert care. They assess patients’ needs and candidacy for various procedures collectively and then perform those procedures as a team with the assistance of trained staff.

“At Saint Joseph, we’ve developed what I call a ‘Heart Team’ approach to caring for the cardiac patient,” Halpin says. “This unique team approach is a game changer, and it puts the patient at the heart of the matter.”

The team performed its first procedure together on July 7, 2013 at Saint Joseph Hospital, but the genesis for this team approach began a few years ago. As advancements in technology have led to more minimally invasive heart surgery (MIHS), such as transaortic valve replacement surgery (TAVR), the lines between cardiothoracic surgeons and cardiologists have become blurred.

The FDA mandated that before a patient could receive a percutaneous heart valve, two heart surgeons had to separately evaluate the patient and agree that the patient was a high risk for traditional heart surgery. The FDA also requires that a surgeon and a cardiologist be present at the same time during the procedure.

After evaluating other programs and seeing what worked and what did not, the Saint Joseph team determined that a four-physician approach represented the ideal balance of opinions and most cohesive system in the operating room.

Taking the blending of specialties even further, the physicians actually rotate roles in the operating room. One physician puts in the pacemaker, one puts in the catheter that squirts dye into the aorta, a third pulls in the valve and holds it in position, and the fourth blows up the balloon, which inflates the valve. Rotating the roles enhances the overall expertise of the entire team.

“Cardiology and Cardiac Surgery have always worked together, but only recently have we found ourselves side-by-side in the catheterization lab, operating room, and specialty clinics,” Schaeffer adds. “It is clear to us, that the skills of Interventional Cardiology and Cardiac Surgery complement each other well for these complex patients. It’s likely that future hybrid procedures will follow the same path.”

Saint Joseph Hospital introduced the first hybrid suite in the state nine years ago, and it has allowed the heart surgeons and cardiologists to treat the patient together in a procedure for the first time in the history of the two specialties. But the teamwork actually begins long before the procedure occurs. The process of assessing a patient begins with all four members of the “Heart Team” evaluating the patient independently. Then they discuss their findings and reach a conclusion as to whether the valve needs to be dealt with and whether or not the patient is a surgical or percutaneous procedure candidate.

The ideal candidate for TAVR is a patient with severe, symptomatic aortic valve stenosis, determined to be high-risk for surgical valve replacement, with an expectation of living at least one year if their heart valve can be replaced. This assessment is made based on other medical problems, previous open heart surgery, and overall degree of frailty. Before TAVR many of these patients have been advised, correctly, that there was nothing else that can be done for them. Some may not have had their options reconsidered since the availability of TAVR.

The best candidates also have no significant peripheral artery blockages so they can undergo the transfemoral approach, which is the least invasive of the TAVR approaches with the best outcomes.

“We have patients declined TAVR due to multiple, severe medical problems such that we don’t expect them to live more than one year, even if we have a successful valve procedure,” says Schaeffer. “We have also had to decline a few patients with aortic valve anatomy that was too large for the two currently available TAVR valve sizes. This will not be a problem with the expected approval of larger valve sizes in the near future.”

The real payoff of the MIHS and the team concept is that many patients who would not have been surgical candidates a few years ago are now not only able to receive treatment, but are leaving the hospital in a matter of days instead of weeks.

“We’re dealing with a general population that we have never encountered,” Mohammadzadeh says. “These are the patients that the cardiologists cannot help, and they are also considered to be very high risk for us to take care of them.

“Before, in order to fix an aortic valve stenosis, we had to have a very invasive approach, which involved cutting the chest and stopping the heart and cutting the heart open and cutting out the old valve and putting in the new valve, which took a significant toll on the patient. With these new technologies, frequently these valves can be fixed with two little incisions in the groin or the valves can be fixed by a small incision on the side of the chest. Overall, the patients do remarkably better after this procedure. We see people leaving the hospital in four days at the most,” says Mohammadzadeh.

In addition to the core team of physicians at KentuckyOne Health Cardiology Associates and KentuckyOne Health Cardiothoracic Surgery Associates, investments have been made, including a PhD in Nursing Valve Coordinator position – currently held by Tara Blair – who is dedicated purely to the structural heart team. Blair works with the doctors to send the patients home with a rehabilitation and recovery program.

“These patients are decisively treated, and they don’t need significant subsequent follow up. They can be managed by their own local cardiologist and primary care physician,” Falluji says. “Our patients are now offered an opportunity for decisive therapy for something that was deemed before as inoperable or high risk and came with a significant tax of complications.”

Less than a year removed from their first team operating effort, the Heart Team is committed to maintaining high levels of success and elite standards for the overall well-being and quality of life for their patients.

“We have a tradition in this hospital of caring for patients with heart disease,” Halpin says. “The high-risk patients are doing well not because we’re lucky, but because we’re cohesive. We put our egos out, and we work as a team. The complexity of the patients that we now see in this structural heart clinic mandates that you have a team approach that will put the patient at the heart of the matter.”