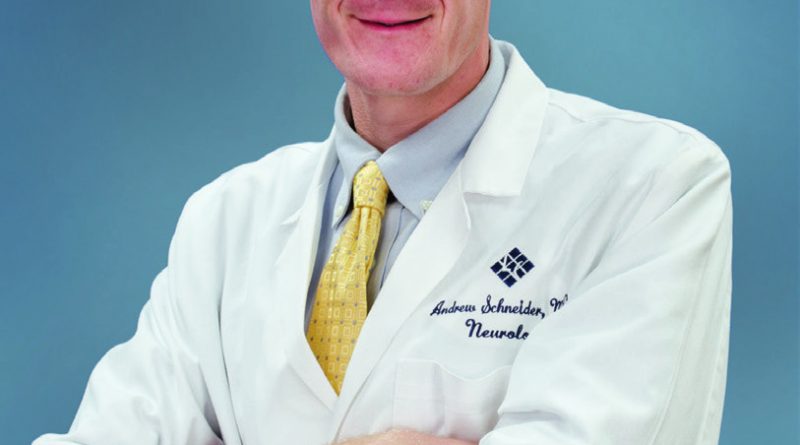 The neurology department at Lexington Clinic is finding new ways to improve the condition of sufferers of Parkinson’s disease. Led by Andrew Schneider, MD, the three-person department has developed a diagnosis template, which ensures that every patient who arrives with symptoms of Parkinson’s receives an analysis that employs evidence-based guidelines for discerning treatable symptoms. Development of the practice guidelines for Parkinson’s, part of Lexington Clinic’s “Operation Excellence” program, helps the neurologists diagnose some of the non-motor symptoms, which are often overlooked in the motor-leaden symptoms of the average Parkinson’s sufferer. Schneider is pleased with the this new diagnostic tool because it has the potential to continue increasing the likelihood that Lexington Clinic patients can “live an active and fulfilling life while being treated for Parkinson’s.”

Parkinson’s disease progresses because of the loss of dopamine generating cells in the midbrain. As neurons accumulate an excess of malformed proteins, the inclusions in which they are stored overrun and disable the cell. While the process of neuron death is readily understood, the cause of excessive protein malformation (some is normal) is not. So ultimately, the disease is idiopathic.

The most ready treatment for Parkinson’s sufferers is simply to provide dopamine, but only so much can be supplemented. The body relies on a certain number of healthy neurons to continue to provide dopamine, and as these die off, degeneration ensues despite dopamine supplements. Prognosis varies greatly with individuals as the rate of disease progression is affected by so many factors. “There is no fixed rule of thumb about it. Parkinson’s is a unique disease for every patient,” Schneider says. “Fortunately, almost all patients have some response to treatment, and we can improve peoples’ lives for several years.”

Patients coming to Lexington Clinic’s Neurology Department benefit from the studious and committed approach of Schneider. The Lexington native, who has been at the clinic for 11 years, came to the field because it was “challenging, and learning how diseases of the brain affect people’s lives is fascinating.” He describes his work with Parkinson’s as “gratifying and compelling because it is treatable.”

Schneider met the challenge to produce practice guidelines for Parkinson’s treatment at the beginning of this year, and he and his partners, Craig A. Knox, MD, PhD, and Eliza E. Robertson, MD, PhD, have been employing it ever since. Schneider says they all agree, “It has definitely improved our care for patients with Parkinson’s.”

The development of practice guidelines is an ongoing project for many Lexington Clinic physicians and an integral element of the Clinic’s comprehensive quality program, Operation Excellence. Developed over the last four years, Operation Excellence helps Lexington Clinic adhere to national best practices guidelines in a number of areas. Chief Medical Officer Robert L. Bratton, MD, explains that the program has three components: ensuring satisfaction of patient, physician, and employees; active assessment of the Clinic versus national benchmarks; and overall systems review to achieve AAAHC accreditation.

Bratton is proud of Operation Excellence. He says the program is “especially beneficial for patients because we are basing our decisions on evidence-based guidelines, and it ensures Lexington Clinic will address the needs of the increasingly educated consumer of healthcare.” He is particularly pleased with Schneider’s work on the Parkinson’s guidelines, adding, “Neurology is one of several leaders in the clinic in terms of implementation.”

While Parkinson’s is not yet as high profile as some other diseases, it is experiencing increased awareness these days. With Michael J. Fox’s return to network television and his character’s open discussion of his affliction and the loss of Linda Ronstadt’s singing voice, more people are learning about the disease. Early diagnosis is on the rise. Research funding is increasing, but clarity of the origins remains elusive. Schneider states, “Nothing is pointing toward a cure at this time.” However, he is optimistic that an increase in current research will yield valuable data in the coming years, leading to a better understanding of both pathology and treatment efficacy. He cites deep brain stimulation as one of the newer treatments that is showing some promise.

Schneider wants patients and physicians to be better informed about the prognosis for Parkinson’s sufferers. While life expectancy is reduced for them, he assures that it should be understood as “a life changing disease, not a life-ending disease.” He adds, “The range of treatments that we have is great, and many patients continue to live fulfilling and active lives.” The practices guidelines that he, Knox, and Robertson employ increase the likelihood that patients who come to Lexington Clinic for their diagnosis and treatment will be among that group.

NON-MOTOR SYMPTOMS ARE EASY TO MISS IN A ROUTINE PARKINSON’S EXAM BECAUSE WE ARE CONCENTRATING ON MOTOR SYMPTOMS.