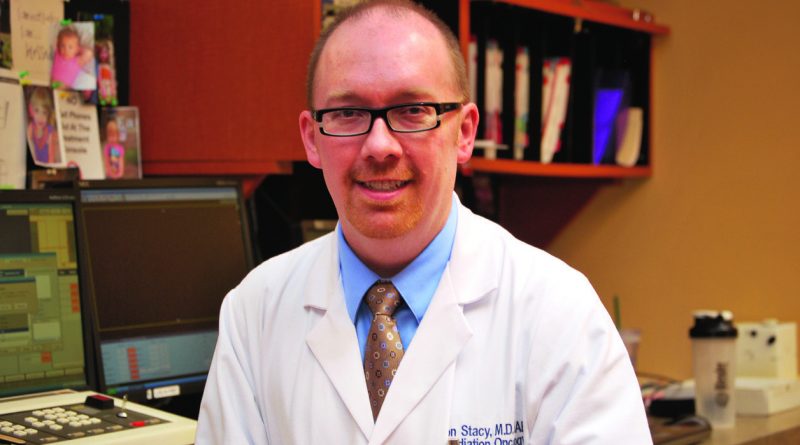 LOUISVILLE Don Stacy, MD, radiation oncologist with Radiotherapy Centers of Kentuckiana and resident expert on stereotactic radiosurgery and radiotherapy, has seen an evolution in radiation therapy over the past five to 10 years. “The general trends in radiation reflected in our practice are the movement from tiny doses of radiation five times a week for several weeks to large doses of radiation in a few treatments over a week or so,” says Stacy. Commonly referred to as stereotactic treatment, which was once just used on the brain, it now has implications for almost every treatment site.

While it’s always been known that larger doses are more effective in destroying cancers, the toxic effects used to outweigh the benefits. Advanced technology now makes stereotactic techniques possible. With the advent of CT scans, robotics, and computer programming, radiation oncologists are able to give large doses of treatment safely. “In 10 to 20 years, probably nearly all radiation treatments will be given in that format,” predicts Stacy.

In addition to reduced treatment times, the toxicity is much less with stereotactic therapy than standard treatments because of the ability to “super-focus” radiation.

Radiotherapy Centers of Kentuckiana is a private radiation therapy practice affiliated with Vantage Oncology, a national oncology group that provides management and standardized care across multiple centers throughout the country. The practice is home to Stacy and his two partners, Frederick H. Albrink, MD, and David P. Musich, MD. They have two office locations, one in Louisville and one in Jeffersonville, Indiana.

With so much technology, radiation therapy requires a complex, multistep planning process. The first step is to get a CT scan of the patient in the position they will receive the radiation in to help calculate doses. Additional studies, such as MRIs or PET scans, are then completed based on the site of the tumor. Special software fuses all the scans in the computer system so the radiation oncologist can see all the images at once.

The next step is a contouring process where physicians and staff map out the target area and the normal structures to avoid. The computer system then calculates the radiation doses and suggests the most effective and safest ways to administer the radiation. Finally, “Before a patient receives treatment, because it’s so complicated now, there’s a quality assurance process where our physics staff treats a “phantom” patient with the exact same tumor to verify what the computer is saying is possible is actually possible on the radiation machines,” says Stacy.

Once a course of radiation is administered, the radiation oncologist continues following the patient. Dr. Stacy emphasizes that, “There are certain areas where it is very important for radiation oncologist to be involved on long-term basis, specifically head and neck cancers because it is such a toxic treatment with long term effects.”

An Array of Options

Three-dimensional radiation therapy, utilizing CT scans for planning, used to be the most common type of external radiation. However, Stacy says most of the Radiotherapy Center’s patients now receive a more advanced type of radiation called Intensity Modulated Radiation Therapy (IMRT). It uses a process called inverse planning, where, instead of the physician directing the computer, the computer does the calculations and plots the best options. “The computer guides you because it is able to see a million ways to do it. It gives the radiation ways the human mind really would not have thought of or doesn’t have time to think about,” says Stacy.

As opposed to 3-D radiation therapy, where physicians treat a region with large margins in order to blanket the tumor, IMRT focuses on much smaller areas, limiting toxicity. The problem is that tumors in some parts of the body move, such as in the prostate and the lungs. “If you’re going to do focused, small margins around the tumor, you have to verify that you’re radiating the right spot,” says Stacy. Image Guided Radiation Therapy (IGRT) was developed to address this issue. Stacy uses IGRT in conjunction with IMRT in almost every patient.

“There are some internal forms of radiation too, but it’s fallen out of favor because there tend to be more side effects for patients and it’s harder to calculate radiation doses,” offers Stacy. This includes prostate cancer, for which Stacy prefers external radiation, although he acknowledges there are a few sites where brachytherapy is still the primary option, like in the case of cervical cancer.

Another form of radiation is radionuclide therapy. These treatments, including a product called Samarium, have been used in bone metastasis in prostate and breast cancers to relieve pain and improve quality of life. Recently the FDA approved a new product called Xofigo® for use in prostate cancer bone metastasis patients. A Radium product, Xofigo actually provides an “overall survival advantage and has significant activity in reducing bone pain,” says Stacy.

Treatments like Xofigo are available early to Radiotherapy Center patients because they participate in clinical trials with large pharmaceutical. Stacy says studies now focus on refining radiation therapy rather than proving its value, with a large focus on stereotactic techniques because they are so much more effective in preliminary studies.

One of the challenges for radiation therapy practitioners is the continuous cost of keeping up with technology. “In this particular specialty, there’s a huge capital outlay. All these machines cost millions of dollars,” says Stacy. He predicts the long-term trend will be physicians forming multispecialty oncology groups to remain viable and contain costs.