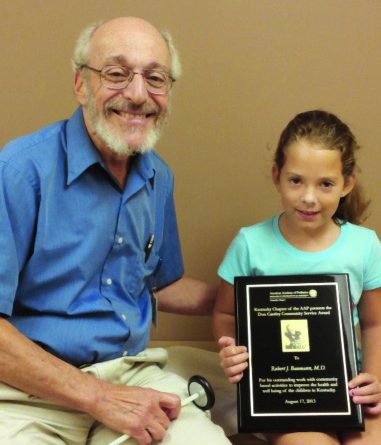 Prior to coming to KentuckyOne Health, Alagia worked as an executive in two private equity-backed companies, first as the president of Safe Sedation, a provider of anesthesia services to ambulatory surgery centers and office-based practices, and later as the chief medical officer of Novasys Medical, the creator and developer of an office-based technology used to treat female incontinence.

Alagia attended Georgetown University as an undergraduate and completed medical school and residency training at the same institution. Following his residency and while building the practice, he earned MSB and MBA degrees in finance from the John Hopkins University and served as the president of the Medical Society of the District of Columbia.

Alagia is a board-certified OB/GYN who completed three years of general surgical training at the University of Louisville Hospital before finishing his obstetrics and gynecology training at Georgetown University Hospital. Alagia was founding partner of a group OB/GYN practice in McLean, Va., and later was founding director of the Minimally Invasive Gynecology Surgery program at George Washington University Hospital.

LOUISVILLE MedEast Physicians, along with its occupational medicine services, has joined Baptist Medical Associates. The practice is located at 4003 Kresge Way, Suite 410.

Melissa Barrett, MD, is a 1984 graduate of the Tulane University School of Medicine in New Orleans, La. She completed her internal medicine residency at Worcester Memorial Hospital in Worcester, Mass., in 1987. She is board certified in internal medicine and is a certified medical review officer and senior aviation medical examiner.

Joseph Cecil Jr., MD, is a 1972 graduate of the University of Louisville School of Medicine. He completed his internal medicine residency at the Medical College of Wisconsin in Milwaukee in 1975. He is board certified in internal medicine.

Arthur Hurst Jr., MD, is a 1970 graduate of the University of Louisville School of Medicine. He completed his internal medicine residency at Baptist Memorial Hospital in Memphis, Tenn., in 1976. He is board eligible in internal medicine and is a senior aviation medical examiner.

Mary Lewis, MD, is a 1984 graduate of the University of Louisville School of Medicine. She completed her internal medicine residency at the Hospital of St. Raphael, affiliated with Yale University, in New Haven, Conn., in 1987. She is board certified in internal medicine and is a certified medical review officer and senior aviation medical examiner.

Lockhart is a 2004 graduate of the family nurse practitioner program at Spalding University in Louisville. She also holds a bachelor’s degree in nursing from Bellarmine University.

In this newly expanded role, Jahn will oversee quality initiatives and clinical integration to ensure a collaborative approach that provides higher quality, better coordinated, and more efficient care for patients. In addition, Jahn will have responsibility for information technology, assuring that the information and clinical systems Baptist Health implements truly assist caregivers in providing top-level care.

As an internal medicine specialist and emergency physician, Jahn’s 27-year career in healthcare includes hands-on experience as a practicing physician in a multispecialty practice, and a dozen years in the U.S. Navy, including service as a flight surgeon. In his administrative roles, he has led major quality and patient safety initiatives at for-profit and faith-based healthcare systems.

Baumgartner, 57, brings more than 34 years’ experience as president of various hospitals from North Dakota to Missouri. In his current leadership role, Baumgartner has fostered the growth of St. Francis from a small community hospital to a comprehensive regional medical center, ranked in the top 10 percent nationwide for quality.

Baumgartner’s healthcare career includes consistent highlights in improved financial strength, collaborations among physicians and hospital leadership, improved efficiencies through technology and IT advances, and a strong focus on giving back to the community.

Current President Bert Whitaker announced his retirement in April, after serving Baptist Health Madisonville since June 2006. He led the transition from Trover Health System to Baptist Health, effective November 2012, and counts among his accomplishments the growth of the medical staff, completion of a $1.8 million physician office space and expanded services throughout the region, including two clinics in area Walmart stores to treat minor injuries and illnesses.

This collaboration will improve access to patient-centered care and create an extension of the Gill Heart Institute into the region. It also provides patients access to UK’s comprehensive cardiovascular expertise and resources while maintaining the familiarity of community health care providers. Dr. Vidya Yalamanchi, Dr. Rao Podapati and Dr. Srini R. Appakondu from the Appalachian Heart Center, longstanding icons for cardiovascular care in the region, will team up with the Gill Heart Institute for advanced treatment options not readily available in the local area. The physicians will also become UK College of Medicine faculty members.

In addition, UK HealthCare and ARH have agreed to jointly administer and manage cardiovascular services at Hazard ARH and five other ARH hospital locations throughout Eastern Kentucky.

Connie Pate, APRN, will provide care at the office, which will offer a variety of services including annual physical exams, well-woman exams, and preventative health consultations. Additionally, the clinic will treat acute illnesses and chronic conditions such as hypertension, asthma, and diabetes.

LEXINGTON Steve Beshear joined local leaders, state officials and representatives from University of Kentucky and UK HealthCare for a ribbon-cutting at the new Eastern State Hospital facility on September 4. The new hospital is located at UK’s Coldstream Research Campus in Lexington.

In addition to the inpatient hospital, the new Eastern State Hospital campus will include three 11,000-square-foot personal care homes, each with 16 beds, offering a less restrictive level of care that promotes patients’ return to a community setting. These personal care homes will provide residential psychiatric services and serve as a step down from the acute care setting.

The $129 million facility replaces the 185-year-old Eastern State Hospital, the second oldest psychiatric hospital in the country. It will be managed and operated by UK HealthCare, through an agreement with the Cabinet for Health and Family Services (CHFS). This new partnership will not only maintain and improve quality patient care, but also allows UK to leverage its considerable expertise in research and clinical therapies to modernize treatment options while training the next generation of behavioral health providers.

LEXINGTON Since his arrival at the University of Kentucky in 1972, Dr. Robert Baumann has been on a mission – a mission to reach as many Kentucky children as possible to provide neurological care they may not otherwise receive.

Last week, Baumann was recognized for his dedication to the health of children by being named the recipient of the Kentucky Chapter of the American Academy of Pediatrics’ Don Cantley Community Service Award.

The UK HealthCare Child Neurology Satellite Clinics were established to help patients in outlying parts of the state get the follow-up care they need. These patients – all under the age of 21 – suffer from neurologic disease, the most common being epilepsy. Other patients may suffer from migraines, cerebral palsy, muscle disease, brain tumors or hydrocephalus.

In addition to Manchester and Pikeville, clinics are now held in Ashland, Prestonsburg, Barbourville, Hazard, Morehead and Somerset.

LOUISVILLE For 18 years, the annual Doctors’ Ball, hosted by the Jewish Hospital & St. Mary’s Foundation, part of KentuckyOne Health, has honored the service of area physicians and community leaders. This year’s event is planned for October 19, 2013 at the Marriott Louisville Downtown at 280 West Jefferson Street in Louisville.

The 2013 Doctors’ Ball will recognize some of the area’s most innovative and caring doctors and community leaders including:

Frank B. Miller, MD Ephraim McDowell Physician of the Year

The black-tie event will include cocktails and silent auction beginning at 6:30 p.m., then dinner and an awards ceremony at 8 p.m. Live entertainment will be provided by Groove Essential. Tickets are $250 each. To purchase tickets to the Doctors’ Ball, visit kentuckyonehealth.org/DoctorsBall or call 502.587.4596.