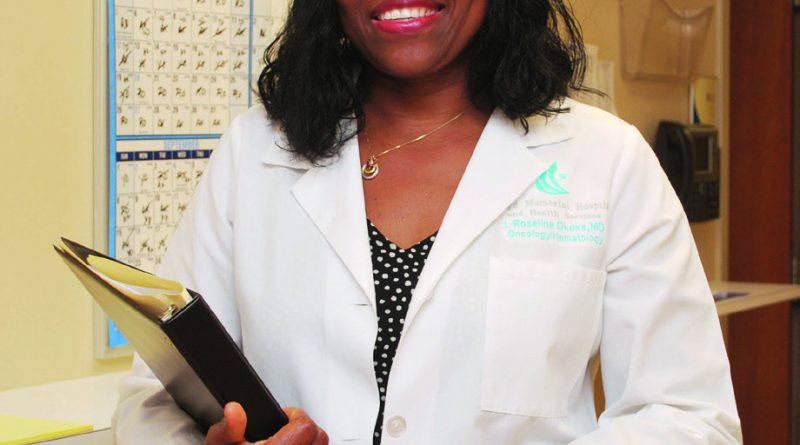 NEW ALBANY, IN Mention the word “mammogram,” and some women might cringe at the discomfort the test can cause. But like it or not, the majority of adult women are familiar with mammograms and their importance. Modern mammography has existed since 1969 and has long been an avenue of early detection for breast cancer. While still a screening staple, medicine has made giant strides beyond mammography in the pursuit of prevention. “Multiple trials have been published with outcomes indicating that we can prevent breast cancer in women considered to be at high risk,” says Ifeoma Roseline Okeke, MD, board-certified medical oncologist and hematologist with Floyd Memorial’s Cancer Center of Indiana.

In terms of prevention, Okeke educates patients on three options. First, she addresses lifestyle factors. “The behavioral modifications shown consistently in multiple trials to reduce risk of breast cancer are reduction in amount of alcohol consumption, exercise, and weight control,” says Okeke. She advises patients to limit alcohol intake and get regular exercise to maintain a healthy body weight.

Tamoxifen has been available for decades and is FDA-approved for pre- and post-menopausal women. The STAR trial found tamoxifen, when taken daily for five years, prevented breast cancer by as much as 50 percent.

STAR researchers demonstrated an equivalent success rate with raloxifene; however it is only approved for use in post-menopausal women.

According to Okeke, early studies of a chemoprevention drug called exemestane are boasting successful effective rates upwards of 65 percent over a three-year period, but it is not yet FDA- approved for chemoprevention. Currently exemestane is used to treat post-menopausal women with breast cancer in the adjuvant and metastatic setting.

Okeke cautions that physicians do need to familiarize themselves with the side effects of chemoprevention medications, however it is important to weigh the risks and benefits prior to prescribing these. Tamoxifen can cause blood clots and increases risk of endometrial cancer. Raloxifene can increase risk of thromboembolic events, though less often than tamoxifen.

Prophylactic bilateral mastectomy is the most effective modality in preventing breast cancer, with success rates of over 90 percent. Okeke explains, “It is impossible to remove all breast tissue during prophylactic mastectomies, and mutated microscopic cells left behind can undergo malignant change. Risk reduction mastectomy should generally be considered in women with BRCA1/2 mutation, other strongly predisposing gene mutations, compelling family history, or women with Lobular Carcinoma.”

It’s in the Genes

Genetic testing is another avenue that is changing the way physicians and patients view prevention. Genetic mutations of BRCA1 or BRCA2 are responsible for five to 10 percent of all breast cancers linked to mutations. A woman who tests positive for a BRCA mutation has a lifetime risk of developing breast cancer of 50 to 85 percent. “Most women with these mutations, if they live long enough, will develop breast cancer,” says Okeke. The lifetime risk for ovarian cancer is 15 to 40 percent. Okeke says these women are also offered prophylactic oophorectomies (surgical removal of the ovaries).

Although the cost of genetic testing can be prohibitive, most insurance companies will cover the cost if the clinical criteria are met. Okeke says the genetic lab they utilize has programs to assist the uninsured and underinsured patients.

For women with germline mutation who choose not to undergo prophylactic mastectomies, Okeke advises aggressive screening beginning at age 25. This includes clinical breast exams by a physician two-to-four times a year, monthly breast self-exams starting at age 18, annual breast MRI/ mammogram, and consideration of chemoprevention. MRI has been found to have greater sensitivity in disease detection than mammogram in these patients.

Fellowship-trained at the James Graham Brown Cancer Center in Louisville, Okeke’s interest in breast cancer began while practicing in Akron, Ohio, before coming to Floyd Memorial. “There are so many aspects to breast cancer care, and it keeps evolving with regards to genetics, prevention, clinical research and molecular targeted therapies. It is very dynamic and interesting,” she says.

Okeke’s goal is to develop a breast cancer prevention clinic at the Cancer Center of Indiana. While no specific plan is in place yet, Okeke envisions a multidisciplinary approach, involving a medical oncologist, plastic surgeon, breast surgeon, psychologist, genetics specialist, clinical research personnel, and nurse navigator. “When a woman has concerns regarding her risk of developing breast cancer either due to family history, prior biopsy reports, or just wants more information, we want to create a center that she can turn to close to home, to provide her with resources to address these concerns,” she says. Okeke also hopes to reach women through their primary care physicians and in the community through self-referrals. Women found to be high risk would be admitted into the program, educated about their prevention options, and referred to the appropriate provider.

Her prevention efforts extend beyond the walls of the Cancer Center through educational seminars and CMEs to discuss risk assessment and prevention.

Women are living longer with breast cancer than they did 20 years ago, and regular screening is key to early detection. But for Okeke, “Prevention is the one aspect of breast cancer care that has been lagging behind nationwide.” It is her hope that education and increased awareness can change that.

RESEARCH HAS SHOWN YOU CAN ACTUALLY DO SOMETHING TO PREVENT BREAST CANCER IN WOMEN CONSIDERED HIGH RISK.