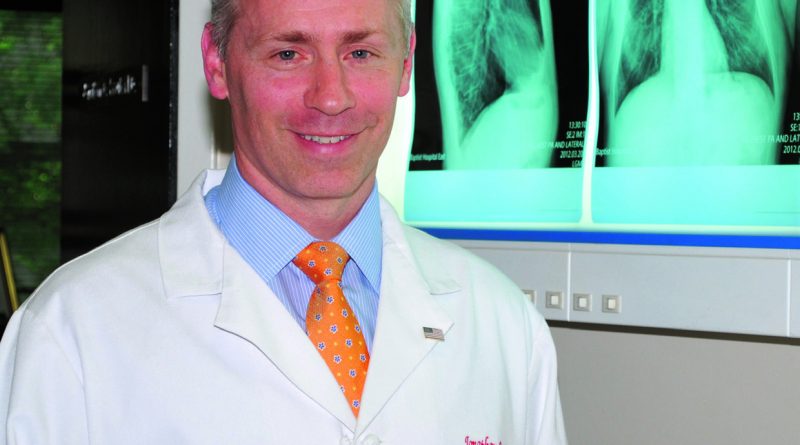 LOUISVILLE Thoracic surgeon Jonathan Kraut, MD, with Thoracic Surgical Specialists in Louisville, part of Baptist Medical Associates, says he chose thoracic surgery over general surgery and other specialties because of the impact he could make. “You can really affect a lot of change doing thoracic oncology,” he says.

And change is upon us. In 2011, the National Lung Screening Trial (NLST), sponsored by the National Cancer Institute (NCI), published its findings, which cited a 20 percent reduction in lung cancer deaths for people who received low-dose helical CT scans compared to standard chest X-rays. While physicians such as Kraut began using CT scans as a screening tool based on those findings, lung cancer screening just got a boost in July 2013 when the US Preventive Services Task Force (USPSTF) issued guidelines recommending annual CT screening for individuals at high risk for lung cancer. Because the Centers for Medicare & Medicaid Services (CMS) usually follow the guidelines of the USPSTF, this means that CT screening for high risk individuals should soon be covered by Medicare and Medicaid, with the hope that private insurers will follow.

Under a Dark Cloud

Kentucky has one of the highest per capita rates for tobacco use and lung cancer. “We find the vast majority of lung cancers we see are already progressed to the point where surgery is no longer a curable option,” says Kraut, estimating that group makes up two-thirds of his patient population.

According to the CDC National Program of Cancer Registries, lung cancer deaths in Kentucky were nearly 3,300 in 2009, and Kentucky ranked highest in the US in lung cancer incidence. Kraut attributes the prevalence in part to patient behavior but also to an inadequacy in getting patients the right care. “That’s our biggest problem, patients not having access to low-dose CT scans,” says Kraut.

Kentucky’s barriers to access are trifold: geographical, financial, and educational. The majority of rural patients Kraut sees already have advanced lung cancer. Currently patients have to pay out of pocket for lung CT screening, although Baptist Health has negotiated the rate down to $184. While primary care physicians are certainly knowledgeable about medicine, they may not know who qualifies for screening or where to send those patients. “As a network, as a member of the medical community, we need to do a better job of educating primary care physicians,” says Kraut. He also notes that referrals often come from the front desk, so office staff needs to be educated as well.

Current or former smokers ages 55–79 with a 30-pack year history of smoking. Pack years are defined by the number of cigarette packs smoked per day times the number of years smoked.

Former smokers must have quit within the last 15 years.

The NCCN recommendations, based on the NLST, differ in that they cover ages 55–74, and they also recommend screening for those ages 50 and up with at least a 20-pack year history and one additional risk factor.

The overall reduction in lung cancer deaths in the NLST study is a result of the numerous advantages of CT screening. Historically, chest X-rays were not used as a screening tool but a diagnostic one and often detected lung nodules incidentally. The downside to X-rays is their minimum threshold for detection, which is one to two centimeters in size. “CT scans are so accurate now they can pick up nodules that are two millimeters in size,” says Kraut. By detecting nodules earlier, potential cancers are easier to surgically resect and require fewer additional treatments, such as chemotherapy and radiation.

One of the concerns with CT screening is the exposure to radiation. Kraut says the data is still evolving, so the true risk is not yet known. However, the National Lung Cancer Partnership estimates the amount of radiation exposure in the lung screening CT is equivalent to that of a mammogram.

Once a CT detects a suspicious nodule, Thoracic Surgical Specialists use a solitary nodule calculator to get an estimate of the chance that nodule is cancerous. The surgeons then refer to ACCP guidelines and Fleischner Society Recommendations for the follow-up and management of lung nodules. The NCCN is also a reference point.

Putting the Pieces Together

Kraut is part of the Multidisciplinary Lung Care Clinic at Baptist Health Louisville, which he and partner Robert W. Linker, III, MD, started in 2009 when they joined Baptist Medical Associate, part of the Baptist Health system. The physician group meets weekly to engage in prospective case review, resulting in coordinated and comprehensive decision-making and planning for each patient. “Basically the patient has several consults at one time, so they don’t have to go to several different offices and don’t have to wait weeks or months to get care,” says Kraut.

Kraut is working through the lung care clinic to educate primary care physicians on early detection and the resources available. In addition to seminars and CMEs, last year he created a biennial oncology symposium for primary care physicians, focusing on lung, breast, colon, and prostate cancers. “If I had it my way, it would be a knee-jerk reflex. If you saw somebody with a nodule, you would just call our lung care clinic and get them set up for an appointment. Unfortunately, one of the downsides of more rural medicine is that they don’t always have all those resources available to them and they don’t always know who to call,” says Kraut.

Beyond establishing and communicating an easy system for referring patients to the lung cancer screening program, Kraut believes a “bricks and mortar” cancer center is critical to improving access. To that end, Baptist Health will soon unveil the Charles and Mimi Osborn Cancer Center on campus to centralize cancer services. “It has to be something that’s tangible that people can identify as a destination for cancer care and where they can get all their treatment in one location,” says Kraut.