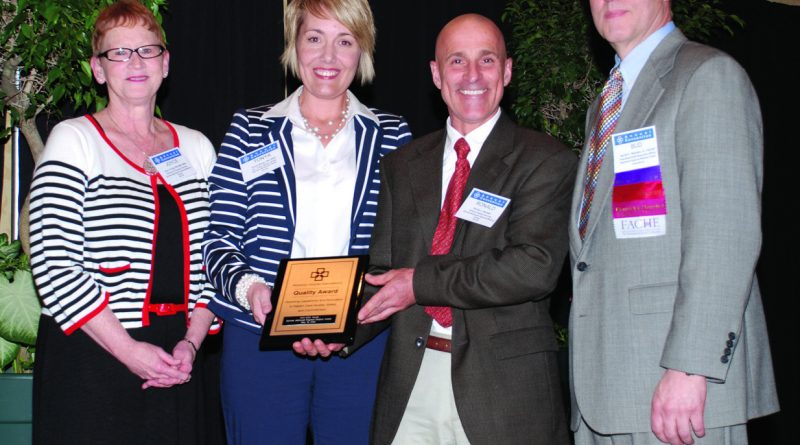 NEW ALBANY, INDIANA The Floyd County Commissioners recently appointed Donn R. Chatham, MD, to serve on Floyd Memorial Hospital and Health Services’ Board of Trustees. Chatham began his term on May 28, 2013. He replaces Stuart Eldridge, MD, who has served for over six years and made many significant contributions to Floyd Memorial during his tenure.

Chatham is a board-certified, fellowship-trained facial plastic and reconstructive surgeon with Chatham Facial Plastic Surgery and Medical Skin Care in New Albany and Louisville with over 28 years’ experience. In addition to his practice, Chatham is also a clinical instructor of otolaryngology at the University of Louisville Medical School, has served on the board of directors of the Greater Louisville Medical Society, is a past president of the Floyd County Medical Society, a past chairman of the Floyd County Board of Health, and was a three-term board member and president of the American Academy of Facial Plastic and Reconstructive Surgery in 2008–2009.

A professor of pediatrics, Adamkin is director of the Division of Neonatal Medicine, co-director of the Neonatal Fellowship Program, and director of Neonatal Nutrition Research at the University of Louisville Department of Pediatrics. Neonatal nutrition is his area of research interest. He has authored over 84 articles, 37 book chapters, 5 books, and 11 webinars dealing with methods and strategies to nourish premature infants.

Adamkin completed a neonatal medicine fellowship at the University of Louisville after completing a pediatric residency at the State University of New York Upstate Medical School, where he also earned an MD.

LOUISVILLE Lu Cai, MD, PhD, has been appointed to lead the University of Louisville Department of Pediatrics Kosair Children’s Hospital Research Institute (KCHRI), which supports basic science research programs dedicated to the discovery of fundamental knowledge relevant to pediatric disease in the areas of diabetes, neurobiology, and cancer.

Cai earned an M.D. in general medicine and Ph.D. in radiation medicine at Norman Bethune University of Medical Science, Changchun, China. A professor of Pediatrics and Radiation Oncology, he joined the faculty of University of Louisville in 1999. Cai has more than 130 peer-reviewed published manuscripts in high-impact journals such as Circulation, Journal of the American College of Cardiology, and Diabetes. His research has been recognized nationally and internationally and he serves as an active member of both national and international diabetes foundations.

Cai’s research focuses on the cardiovascular complications of diabetes with an emphasis on novel mechanisms to protect the heart. His research team uncovered the first evidence that zinc may protect the heart from diabetes-induced dysfunction and are identifying the cellular mechanism that regulates this effect. Serum zinc levels correlate with a spectrum of human diseases. Cai and UofL pediatric endocrinologist Kupper Wintergerst plan to investigate the role of zinc in insulin-dependent children with diabetes.

LEXINGTON UK HealthCare has announced plans to open 64 more beds in Pavilion A of the University of Kentucky Albert B. Chandler Hospital subject to approval by the Board of Trustees.

The eighth floor of the 12-story pavilion is targeted for completion in the fall of 2014, said Dr. Michael Karpf, UK executive vice president for health affairs.

Overall, construction and expansion of the new Pavilion A at UK Chandler Hospital is expected to support patient care for the next 100 years. Once fully fit out, the 1.2 million-square-foot facility will include 512 state-of-the-art private patient rooms. When combined with the Kentucky Children’s Hospital, the facility will have a total of 671 private rooms.

The mission of the Eastern Kentucky Healthcare Coalition, as written in the organization’s mission statement, is to “develop a clinically integrated network of healthcare providers to enhance the health status of our communities in an accountable and responsible manner.” In the coalition, each facility maintains its autonomy while working together on select projects that provide collective efficiencies for the hospitals (such as vendor contracts), improve patient access (through coordinated health events to provide greater patient access while eliminating duplication of efforts) and prepare for the reforms of the Affordable Care Act in addition to other integration.

CoC-accredited programs provide their community with high-quality, multidisciplinary patient-centered care. CoC programs evolve in response to new diagnostic treatments, quality assurance, and improvement initiatives, and the needs of cancer patients throughout the U.S.

A facility receives a Three-Year Accreditation with Commendation following the onsite evaluation by a physician surveyor during which the facility demonstrates a Commendation level of compliance with one or more standards that represent the full scope of the cancer program (cancer committee leadership, cancer data management, clinical services, research, community outreach, and quality improvement). In addition a facility receives a compliance rating for all other standards.

DANVILLE For the second time in just three years, Ephraim McDowell Regional Medical Center (EMRMC) has been recognized for the high quality of care given to knee & hip replacement patients and for spine and laminectomy surgical care. On May 10, EMRMC received the 2013 Kentucky Hospital Association (KHA) Quality Award. The KHA Quality Award is presented to honor hospital leadership and innovation in quality, safety, and commitment in patient care.

“This award from the Kentucky Hospital Association further validates the four Gold Seals of Excellence previously awarded to EMRMC by The Joint Commission for providing such high quality care for our orthopedic and spinal patients,” says Vicki A. Darnell, president & CEO, Ephraim McDowell Health. “Our OrthoSpine Center of Excellence was joined by our physician champions of Danville Orthopedics and Dr. Robert Knetsche of the Central Kentucky Spine Center to achieve the level of teamwork, commitment, and dedication to earn this prestigious recognition.”

EMRMC previously won the KHA Quality Award in 2010 for excellence in our total knee and total hip replacement program.

LOUISVILLE University of Louisville Hospital, part of KentuckyOne Health, has been named a recipient of the 2013 Kentucky Hospital Association (KHA) Quality Award. The facility was recognized at the organization’s annual meeting, which was held on May 11.

The hospital was selected among facilities with 250+ beds and was chosen based on a program implemented in the Medical Intensive Care Unit (MICU) to reduce the number of infections and pneumonia related to a central line or ventilator. Through the use of educational campaigns, staff meetings, in-services, checklists, and changes to the patient care provided, the facility has seen sustained infection prevention since its implementation in 2009.

NEW ALBANY, INDIANA The Floyd Memorial Cancer Center of Indiana is pleased to announce the recent receipt of a $21,150 grant from the Louisville Affiliate of Susan G. Komen for the Cure®.

By receiving this grant the outreach portion of the Cancer Center of Indiana’s Breast Cancer Nurse Navigator Program will be able to continue to provide care and treatment in the community to underprivileged residents of the New Albany Housing Authority.

The goal of the program is to lessen the burden on breast cancer patients and their loved ones by providing them with a nurse navigator in charge of coordinating their care and treatment. This program helps to improve patient outcomes by insuring the early detection and treatment of breast cancer and well-coordinated communication between patients, physicians and the rest of the healthcare team.

LOUISVILLE Sts. Mary and Elizabeth Hospital and University of Louisville Hospital, part of KentuckyOne Health, have been awarded the 2012 “Tissue Donations Performance Award” by the Kentucky Organ Donor Affiliates (KODA).

The award is presented to a select group of hospitals that have achieved or exceeded a targeted conversion rate for tissue donation.

Due to these hospitals’ efforts, more tissues were available to enhance the lives of patients through the gift of tissue donation. Donated tissues may help renew sight through cornea transplantation, provide skin for burn victims, bone for spinal surgeries and cancer, veins for heart bypass surgery, and heart valve replacements for children and others.

Two University of Louisville pediatricians have been chosen to serve on prestigious national American Academy of Pediatrics committees.

Neonatologist Dan L. Stewart, MD, has been selected to serve on the American Academy of Pediatrics Committee on the Fetus and Newborn (COFN), which is comprised of nine members. This highly-selective committee studies issues and current advances in fetal and neonatal care; makes recommendations regarding neonatal practice; and collaborates with the American College of Obstetricians and Gynecologists.

Stewart is assistant director of the Division of Neonatal Medicine and director of nurseries for Kosair Children’s Hospital—the seventh largest NICU in the U.S.—and the University of Louisville Hospital. Stewart is a past president of the Kentucky Chapter of the American Academy of Pediatrics. He serves on the board of the Kentucky Pediatric Society Foundation and is the director of newborn screening programs at several local hospitals. Additionally, Stewart has worked internationally to promote improvements to neonatal care, traveling to countries such as Romania, Moldova, Russia, Poland, Ghana, Ecuador, and Vietnam. He has been the primary investigator on numerous National Institutes of Health-funded pharmacology studies as well as studies involving high frequency oscillatory ventilation, surfactant, and inhaled nitric oxide. He has authored 70 peer-reviewed publications and several book chapters.

University of Louisville pediatrician Janice Sullivan, MD, has been selected to serve on the American Academy of Pediatrics Committee on Drugs. This national committee reviews all aspects of pediatric pharmacology including drug indications, dosing, and use precautions. The committee also advises the board of directors in matters related to drug labeling, safety, and efficacy for both prescription and over-the-counter drugs; monitors federal legislation related to the drug approval process; and promotes the need for expanded pediatric drug trials.

Sullivan is the chief and medical director of the Kosair Charities Pediatric Clinical Research Unit. Her research interests center around investigator-initiated studies, Phase I–IV industry-sponsored clinical trials and collaborations with other centers including the NIH funded Pediatric Trials Network (Duke Clinical Research Institute). She has been the principal investigator or sub-investigator on over 200 clinical trials. She also maintains an active critical care practice and has served as a member of the University of Louisville Biomedical Institutional Review Board (HSPPO) since 1998. She is the author of 24 peer-reviewed publications primarily in the areas of pediatric clinical pharmacology and critical care.