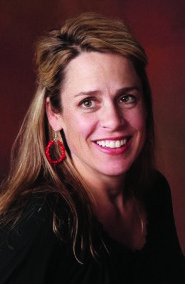 LOUISVILLE On April 15, 2013 Kelli Mudd Miller, MD, OB/GYN, was nearing the finish line of her third Boston Marathon when she heard what she thought was a loud firecracker explode a couple of hundred yards ahead of her near the finish line, but she kept on running. Moments later, a second blast occurred within 50 yards of Miller, and she immediately knew it was not fireworks but a bomb.

“My first thought was that there would be a third explosion and gunmen on the street and that I was going to die,” says Miller. “I thought of my three children and how I would never see them again.”

Miller recalls the paralyzing fear that rooted her in the middle of Boylston Street. With smoke circling, the spectators, who moments earlier had been shouting encouragement, were now screaming with terror. She vividly remembers the first responders dashing into the smoke and screams. Fortunately her companion, had been waiting for her at the finish line on the right hand side of the street. “Somehow he found me and said, ‘We need to get out of here,’” says Miller. They climbed over the barricades and made it to the safe harbor of their nearby lodgings.

Running the 26.2 mile course is a long race says Miller, but on this Patriot’s Day, the weather was beautifully spring-like and the crowds were enthusiastic. “You feel like a rock star; people are waving and cheering for you.” She notes that she was running a little slower than her usual 3 ½ hour pace because she was enjoying the day, talking with other runners, and high-fiving spectators and kids along the way. “When I turned onto Boylston Street and saw the finish line, I felt joy and excitement. It was a perfect day.”

The 26th mile had a memorial dedicated to the victims of the Newton massacre. Miller’s voice still quivers with emotion when she describes her feelings of sadness and anger over the twin acts of terror. “My heart is very sad,” she says. “Innocent lives have been altered forever.”

Miller’s original plan was to return to her practice on Wednesday, April 17, two days after the race. “I thought I could go back to work, business as usual,” she says. But that was not to be. Her partners suggested she take some time off, which she now acknowledges was the right thing to do. “I was having trouble sleeping. Loud noises startled me, and crowds bother me.”

Meditation and yoga have been helpful for Miller “getting the sights, the smells, and noises of that awful moment out of my head.” She eschewed anti-depressants for a holistic approach to healing, leaning on friends, focusing on positives, and starting to run again, though only 10 miles a week, not her normal 20. “I’ve been changed,” she says. “I take more time with myself, my family, my friends, my patients. I realize how fleeting life is. I am more in the present.”

“I feel like I have grown through this experience,” says Miller. “I feel stronger now, although I never felt so weak as I did when that bomb went off. I felt everything was out of my control. But now, I feel stronger because of the good that I saw in the aftermath, how people came together in community and because of the way that I am living my life now. I will not live in fear.”

WHEN I TURNED ONTO BOYLSTON STREET AND SAW THE FINISH LINE, I FELT JOY AND EXCITEMENT. IT WAS A PERFECT DAY.