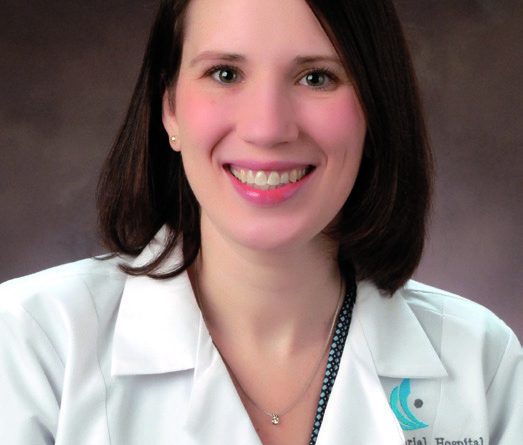 NEW ALBANY, INDIANA “With women for a lifetime,” is the slogan of the American College of Midwives (ACM) and the practice philosophy of Carla Layne, ARNP, certified nurse midwife (CNM) with OB/ GYN Associates of Southern Indiana, PSC, in New Albany. “From adolescence to menopause, my focus is educating women about their choices so that they know that there are alternative therapies,” says Layne.

While the practice of midwifery often brings to mind normal pregnancy care and natural deliveries, certified nurse midwives are trained in deliveries with epidurals and gynecological services as well. In addition to well woman care, Layne sees patients for problems, such as vaginitis, birth control planning, hormone replacement, bioidentical hormone therapy, aromatherapy, and alternative therapies when standard treatments are unsuccessful. She also spends a lot of time counseling adolescents about birth control and sexually transmitted diseases.

Midwifery is often misunderstood because there are different levels of midwife training. Licensed midwives do home births, are trained by other midwives, and do not have any official medical or nursing education. Certified midwives have a degree in midwifery but no background in medicine or nursing. CNMs have a nursing background and undergo two additional years of study in midwifery. Layne holds a master’s in nursing in addition to her midwifery certificate. Currently she delivers exclusively at Floyd Memorial Hospital & Health Services.

For Layne, making sure her standards are current is critical. “Midwifery has a long history in the US, especially in Kentucky. Mary Breckinridge started the Frontier University in 1925. So, there’s a lot of research and certified nurse midwives use evidence-based practices just like physicians do.”

“I think one of the things we were looking for is physicians all have similar training no matter where you went to medical school or did your residency … so because midwives have a different kind of training, it’s interesting to see the different philosophies and ways they address different issues,” says Heather Lewis, MD, with OB/GYN Associates of Southern Indiana of her practice’s decision to add a midwife to its staff.

With OB/GYN Associates since December 2012, Layne has a growing practice of post-menopausal women seeking bioidentical hormone therapy. Layne works with a compounding pharmacy to provide patients individualized plant-based bioidentical hormone replacement. While it takes an average of six months to find the right formula for each patient, Layne claims a 95% success rate in her previous practice.

Aromatherapy is an example of an alternative therapy Layne utilizes to afford her patients a more natural experience. Lavender is used for anxiety and relaxation, either during delivery or during a procedure. Tea tree oil can be used to combat vaginal bacteria and yeast. For patients who are opposed to Pitocin, Layne uses the herb clary sage to induce contractions.

When it comes to labor and delivery, Layne estimates about 80% of patients who seek out a midwife want natural childbirth, while 20% want an epidural. Either way, she spends initial visits educating her patients about pregnancy and what she can do for them during labor. One major difference between Layne and the physicians in her practice is that she labor sits with her OB patients, something physicians simply do not have the time to do. Patients understand that this means their office appointments may be rescheduled if Layne has a patient in labor at the hospital, but they relish the opportunity to have her undivided attention when it is their turn. Techniques Layne utilizes to assist patients in laboring without pain medication include meditation, hydrotherapy, aromatherapy, and massage.

The flexibility of a midwife’s schedule has other advantages for patients. “I have the pleasure of saying, ‘Okay, schedule my patients every half an hour. Don’t double book me,’” says Layne. While physicians might see upwards of 40–45 patients a day, Layne sees six to 15 in her burgeoning practice, a volume she hopes to build to 15 to 20. Lewis says the ability to spend more time educating patients is another of the reasons they chose to add a midwife to the practice. “I think patient education and teaching is a lot of the practice of midwifery … I think that’s one of the places medicine falls a little bit short is educating patients. We make an effort to do that, but I think they have more time,” says Lewis.

On her relationship with the physicians in her practice, Layne says, “Just like the doctors all practice differently, they understand that I am a provider and that I practice differently.” She describes her style as conservative when it comes to following the practice guidelines she and the doctors agreed upon, meaning she does not hesitate to consult with or turn a patient over to one of the physicians if they fall outside of her parameters. “We want to look at midwifery as pregnancy being a normal thing. So when it starts to fall outside the realm of normal, then we look at how much of it can be managed by midwifery and how much of it needs to be managed medically,” says Layne.