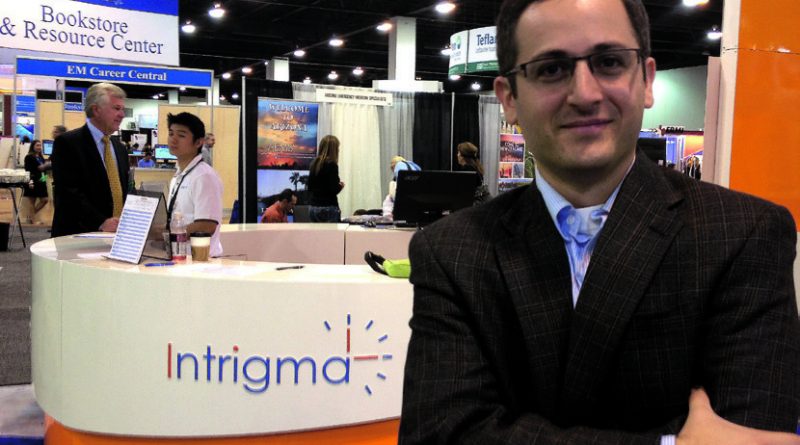 There’s an adage about innovation – that the best technologies eliminate the need for humans to perform the most baneful of tasks. In this vein, among the most compelling stories I encountered in the past year’s search for innovative healthcare startups is how Intrigma, a new scheduling technology for the healthcare scheduling, revolutionized staffing in the toughest of all practices – the emergency department.

The emergency department, of course, is the safety net for healthcare. It’s the one place guaranteeing treatment for all, and this situation often leads to overcrowding and safety issues that make the ED a site for high employee turnover and burnout.

Scheduling ED physicians and staff, it follows, is a dynamic, highly variable, and complex process aimed at filling shifts, increasing staff satisfaction, and reducing the risk of burnout. A scheduler needing to fill the shifts of physicians who take time off for family activities or religious observances must consider the replacement physician’s needs, how many night shifts in a row did he fill, are his circadian rhythms being respected, and how slow or fast he is compared to the expected volume of the vacant shift. It is also time consuming and expensive, a task not easily delegated since it takes a physician leader with clout to smooth over the rough edges caused by calling in staff to fill in for someone who has requested time off.

In the typical ED, on the typical day, there are over a billion possible scheduling combinations. To assess each for its suitability to that day is, for a human, a computationally impossible task. With a bit of irony mixed in as schedulers themselves burnout from this task, it’s no wonder that ED scheduling is often outsources to practice management firms.

I first met Intrigma CEO Tal Eidelberg -and heard his compelling backstory – in the summer of 2012 at a NYC MedTech forum. His story goes that he was nineteen, serving a compulsory term in the Israeli Army, when he designed his first scheduling software. It filled a guard post that had been plagued by hookie-playing and injury claims that landed scofflaws on much cushier patrols. Filling this guard post was the bane of the base, and designing a scheduling program to keep it filled, fairly, earned Eidelberg a great deal of latitude from a grateful commanding officer.

A few years later, in graduate school at Stony Brook on Long Island, Eidelberg presented the software in class and a colleague turned to him saying how his wife, a physician at the nearby Stony Brook University emergency department, could really use a solution like his. Introductions were made, Intrigma was formed, and Eidelberg was mentored through the Long Island High Technology Incubator at Stony Brook, where high profile EDs like Montefiore Medical Center and the Ochsner Health System signed on to pilot the technology to the marketplace.

“The best thing that good schedule can do is make sure that the physicians are well rested and give them the lifestyle that they want,” said Eidelberg, adding quickly that Intrigma’s software does this in an environment where physicians view some software products as “death by a thousand clicks.”

A few months ago, I got the chance to sit down with the Intrigma teameduring the American College of Emergency Physicians convention in Denver, where it was apparent that Intrigma had become the stars of their field.

Dan Ports, VP of technology, recalled how the team’s agility in responding to customer requests, coupled with the goal of usability, allowed Intrigma to consistently bring more quality features to its users. “We have a feature that allows physicians to sign up for their own shifts,” he said, “and in the first version of this, it took about five clicks to sign up for a single assignment. If you’re just doing one shift, this is no big deal. But our client wanted to do a month’s worth of assignments at once, which meant 100 clicks. So we went back to the whit board and reengineered the process down to one click per assignment, which made our client very happy.”

Ports’ job is to make sure that that details are not lost, that physicians can request their time off and then buy their plane tickets to Florida with confidence. He makes sure users benefit from the oversight built into cloud-based computing. Since Intrigma tracks every click, they know where the areas of difficulty are and can reach out to users offering help. Ports even recalls calling one user, after a dozen or so failed login attempts, to ask if they’d like to change their password. They said it was like they could read minds.

Shortages are an interesting dilemma where Intrigma’s software makes the impossible possible. Eidelberg told me a story about a rural hospital, in a resort setting, that had a seasonal influx of patients simultaneous with a few regrettable staffing complications. First, one physician had serious illness in the family and couldn’t work at all that summer. Then, another physician got in a car wreck, and everyone had to put in two or three extra shifts per week. Finally, a third physician got burned out and quit.

“In that situation, the medical director was in a very tight spot,” said Eidelberg. “Not only was he working seven days a week, he also had to call for favors every single day. With the shortage, he took what he could get.” Without the software to automate the schedule, and automate it right, this shortage would be impossible to manage.