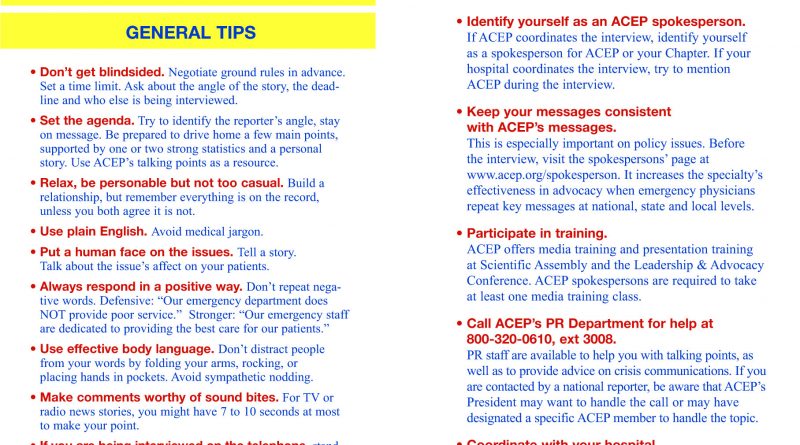 What’s the first thought that comes to your mind when you hear that a member of the media is trying to reach you? Is it a Good Feeling? Doubt? Anxiety? Annoyance?

Ryan Stanton, MD, is Medical Director of UK’s Good Samaritan Hospital’s ER and current president of the Kentucky chapter of the American College of Emergency Physicians (KACEP/ACEP). He averages 1–2 media encounters per week in his role as a media spokesperson for ACEP, but Stanton has given as many as 15 media interviews in one week during certain elevated periods of activity that are not at all related to high profile crime, celebrity sightings or major trauma or accidents. More often, says Stanton, the media calls during flu season or severe hot or cold weather periods. Not exactly what TV or realty shows would have you believe, but much closer to the truth, according to Stanton.

Stanton, a graduate of East Tennessee State University (ETSU) College of Medicine, spent a year in surgery before he completed a residency in Emergency Medicine at the University of Kentucky (UK) where is board certified and has a faculty appointment to teach Emergency Medicine. He joined MESA Medical Group full time in 2008, where a number of doctors have served in KACEP including Chris Pund, MD, as a past president and current board members Jeremy Stitch, MD and Doug Smith, MD.

A Background in Media Helps

Dealing with the media comes easy to Stanton because he has experience on the other side of the microphone. He first encountered media at age 14 through a program at his church. While an undergraduate and medical student, he worked at the public radio station at ETSU. During intervals in his residency at UK, Stanton worked for Clear Channel Radio as a board operator for UK football and basketball games.

After Stanton completed his residency at UK, he went to Boston where he worked with Dr. Tim Johnson and the ABC News Medical Unit gaining valuable first-hand experience in a major media market. That translated into a working relationship in Lexington at the ABC affiliate WTVQ when Stanton began his medical career full time at UK’s ER.

“I definitely don’t do it for the money,” explains Stanton when asked about his motivation. “I’ve always felt by definition that a physician is a teacher. Nature will cure many of the injuries and illnesses we see in the ER, the viruses, the cuts, the bruises. In the ER setting, I can teach the residents and some of the patients, give them the answers and explanations as to what’s going on, what’s going to happen. So on a grander scale through the media, I can teach people how to avoid getting sick and what to do when they become ill.”

Addressing the vast mis-understanding in the US population of the difference between health and medicine also contributes to Stanton’s mission. “The US healthcare system is reactionary, not preventative,” he says. “Nobody sees that more clearly than an ER doctor.”

Stanton is currently featured in two on-air programs for WTVQ: “Doc on Call”, a question and answer segment which airs once a week during the noon newscast and “What’s Going Around,” a regular feature program designed for public education of current health topics and trends. Additionally, Stanton produces two podcasts. One is for consumer healthcare education and airs on Tennessee public radio station WETS-FM, 89.5 and iTunes. Stanton’s other weekly podcast is for EM News, a magazine designed for ER physicians. It is a summary of the most current ER research and best practices. “It’s difficult for ER doctors in rural settings to stay up to date on ER trends,” says Stanton.

Both MESA Medical Group and UK are supportive of Stanton’s media involvement, he says. “The iPhone has revolutionized everything for my podcasts. I can get broadcast quality during downtimes and night shifts at the hospital. I can do the two minute consumer podcast in about 15 minutes. The physician podcast takes longer. I usually do that in my basement while relaxing after a shift. MESA doesn’t schedule me during the television show and UK PR is very helpful taping the “What’s Going Around” program. We all want to get our message out to the community,” says Stanton.

Preparation & Training Are the Key

Stanton encourages all physicians to take advantage of the media relations training from ACEP that are applicable to all doctors, because one day the media may call you. Most physicians, he says, actively avoid the media, but the ability to communicate with the public can be learned through in person or online training.

“Getting comfortable with the media is important because media outlets turn to physicians as experts. The ER is the hub of day-to-day healthcare and ER doctors have the best view of the over –picture,” says Stanton.

The moral of the story: Be Prepared and Be READY.

MOST PHYSICIANS, HE SAYS, ACTIVELY AVOID THE MEDIA, BUT THE ABILITY TO COMMUNICATE WITH THE PUBLIC CAN BE LEARNED THROUGH IN PERSON OR ONLINE TRAINING.