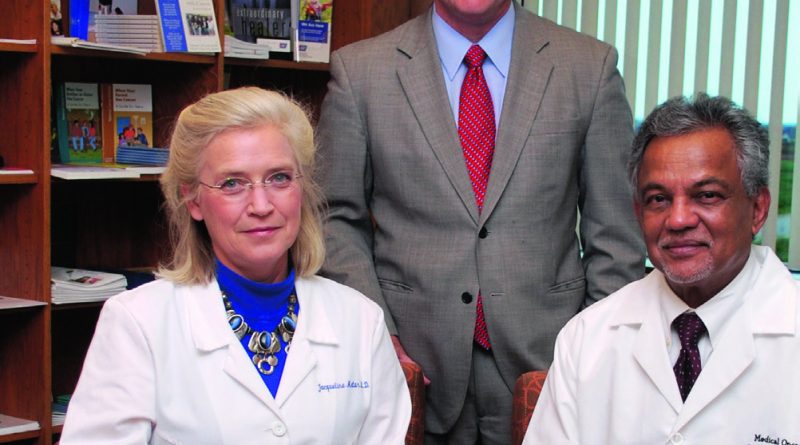 Kevin Costner dramatizing Devil Anse Hatfield in a recent History Channel miniseries recalled what is perhaps Kentucky’s most notorious feud – the Hatfields vs. the McCoys. In healthcare, Kentucky ranks notoriously as well, and for all the wrong reasons.

Leading the nation in incidence and mortality rates for lung cancer, Kentucky is down from the top spot in colon cancer, although it is still in the top three. With high rates of smoking and other detrimental lifestyle factors, the Commonwealth continues to do battle on many medical fronts.

A newly merged organization is hoping to tackle cancer in a more attentive and comprehensive manner statewide.

The recent merger of Saint Joseph Health System and Jewish Hospital & St. Mary’s HealthCare (JHSMH) into KentuckyOne Health™ has poised the organization to shrink the accessibility gap and integrate high quality services across the state.

The mission and vision of KentuckyOne is to be the premier, integrated, comprehensive health system in the Commonwealth providing high-quality care close to home — reducing the incidence of disease and eliminating inequities in access. The broad oncology program goals are simple, yet lofty: to detect cancers at an earlier stage and grow life expectancy.

The merger encompasses oncology services from the two legacy organizations in multiple locations in Louisville and Lexington and outlying areas, such as Shepherdsville, Shelbyville, Bardstown, Berea, London, and Mount Sterling.

“In the world of accountable care modeling, the best way to control costs and the best way to assure the best clinical outcomes possible is to manage patients holistically,” says Mark Milburn, vice president of oncology services for KentuckyOne. In order to put this vision into practice, KentuckyOne is approaching their growth plan from a patient need standpoint, rather than a business expansion one. “We’re going to make a very large investment in cancer,” says Dan Varga, MD, chief clinical officer for KentuckyOne. “We’re trying to really be thoughtful and deliberate about understanding what the Commonwealth needs, what the oncology care delivery model for next 20 years should look like, and make investments in programs and technology that will support that.”

Milburn advocates the pathway to high quality, patient-centered care is controlling costs through patient safety, adherence to national guidelines, and prevention of adverse or unintended healthcare access. “I really believe that as we move forward and begin to address the needs of populations like Kentucky, we’re going to have to find a way to provide high quality, low cost care, and to me the lowest cost care is the one where you treat the patient appropriately,” he says.

Identifying and serving populations with limited access is something Subhash Sheth, MD, medical director for Jewish Cancer Care, has experienced firsthand. Board certified in medical oncology and internal medicine, Sheth is part of Cancer and Blood Specialists, the only medical oncology group providing cancer care in Louisville’s South End.

Jewish Cancer Care has grown, encompassing sites in Louisville and surrounding counties. KentuckyOne provides the platform for Sheth to extend his vision of serving a population with poor access. “We came to realize that there are multiple underserved areas across Kentucky. There are certain areas with the highest concentrations of things, like lung cancer, without much of any screening or treatment going on,” says Sheth.

With a large focus on lung cancer, the organization is already pursuing one of its top priorities: screening and prevention. With breast and colon cancer screenings already in place, they have launched a lung cancer screening program in Jefferson County, which Sheth hopes to expand to other areas soon.

Just nine months old, one of the challenges KentuckyOne faces is how to integrate and link numerous providers from two different legacy programs across hundreds of miles.

With 20 years’ experience in the Lexington market at Saint Joseph Cancer Center, Jacqueline Matar, MD, a medical director of radiation oncology, embraces the opportunity to collaborate with oncologists across the state. “Since joining with KentuckyOne, I have now met and begun collaborating with physicians in the Louisville market and the London market, so it is truly becoming a statewide approach,” she says.

Those collaborations are building on pre-existent ones. Matar and Saint Joseph have collaborated closely with the Flaget Cancer Center in Bardstown, Kentucky, since its inception. “However, because of geography, Bardstown is actually more connected to Louisville physicians. Now that we are all working together, we’ve completed the loop,” says Matar.

Monte E. Martin, MD, double-boarded in medical oncology and hematology, says the Flaget Cancer Center is almost like an oncology boutique. “What’s different about our approach here is we have one nursing staff shared between radiation and medical oncology, so patients’ continuity of care is 100%,” says Martin. Shared staff and space translates into the ability to have multimodality conferences at any time on any patient. Having worked at UofL and within the JHSMH system, Martin believes his expertise plus the services available at Flaget provide the same quality of care a patient would receive in a larger city.

M. Azeem Niazi, MD, is board certified in internal medicine and medical oncology and has practiced hematology/oncology in London, Kentucky, for over 11 years at the Commonwealth Cancer Center. Niazi also believes the merger under KentuckyOne helps him deliver a higher level of oncology services in a rural setting. “The merger with the hospital and working together helps us a lot with delivery of medications, being able to take better care of patients, and having a lot more access to other facilities,” says Niazi. “We have a very coordinated way of working with the hospital.”

Access to chemotherapy medications has been an issue for Niazi and other independent oncology practitioners because of cost and insurance issues. Being part of a larger, hospital-affiliated entity has changed that. Niazi is also trying to establish some dedicated cancer beds at Saint Joseph London, so they can provide inpatient chemotherapy. Currently those patients must be transferred to tertiary care centers.

One way KentuckyOne seeks to demonstrate the quality of their oncology services is through accreditation. Jewish Cancer Care is fully accredited by the American College of Surgeons Commission on Cancer. KentuckyOne has submitted applications for Saint Joseph Hospital and is moving forward with a plan to seek accreditation for all locations.

Advantages of a Larger Organization

Through the merger, KentuckyOne has some big advantages, the most outstanding being the backing of a well-established, national healthcare system – Catholic Health Initiatives (CHI), which is part of Catholic Healthcare Oncology Network (CHON).

According to Varga, tapping into CHI’s national oncology consortium to identify best practices and borrow other programs’ implementation strategies to efficiently translate those models for local use is an operational boon.

One high impact example is the implementation of a systemwide electronic health record (EHR). KentuckyOne has the benefit of partaking in CHI’s national rollout of comprehensive inpatient and ambulatory EHR platforms. Both are in the early phases and are set to be complete in 2014. “It is very nice to be part of nationwide implementation plan and the stability that comes along with that and then to have the support of a national oncology service line,” says Milburn.

An increased opportunity for research and clinical trials is another benefit of the merged organization. Martin looks forward to the advantage of unifying all providers and institutions with EHR and the prospects that will afford. “What’s going to be interesting and a great opportunity by having so many oncologists unified as a group throughout the state, we’ll be able to qualify for more clinical trials that are open to larger entities, such as universities and huge conglomerates,” says Martin.

Another partner in KentuckyOne’s quest for a statewide network is 21st Century Radiation Oncology, the largest provider of radiation oncology services in the US. Mark Jones, MD, medical director for Louisville Radiation Oncology Center affiliated with 21st Century, says the affiliation has allowed his center to be the first in the state to use new technologies such as stereotactic radiosurgery and gamma function. There are four facilities statewide either owned or operated by 21st Century Oncology, all with access to the latest clinical trials. “We have the most advanced physics support available including planning software, which is the lifeblood of what we do, as opposed to a more local or regional market that might not have the resources available to a larger network,” says Jones. “And while technology is important, the real strength of our treatment center is the personal and caring approach to cancer care demonstrated by an exceptional staff, many of whom have served the south Louisville area for over 10 years.”

Jones also believes 21st Century’s nationally recognized division integration with multidisciplinary practices will be beneficial models for KentuckyOne going forward. “There is just great synergy there I believe,” he says.

One financial implication of the merger is a significant investment commitment, not just for cancer, but across all medical specialties. “We have the scope and scale for investment that we didn’t have as individual health systems before,” says Varga. “Given that Kentucky leads the nation in terms of cancer deaths in certain sites and disease burden is incredibly high, we’ll obviously be spending a significant component of the $320 million, which was committed to KentuckyOne when we merged, in the cancer domain,” he says.

One of the tasks for KentuckyOne is expanding technology throughout the state, but also determining what is appropriate in each situation. “Our goal is to have navigation for the patients, so that each patient is guided throughout their treatment course in the most efficient manner,” says Matar. For instance, elements such as EHR, infusion technology, and basic surgery capability will be deployed broadly; however cutting-edge radiation therapy treatments such as Cyber-Knife or intra-operative radiation may not be warranted for every location. Jones concurs, “While we don’t want to create a cookie-cutter model, we do want to establish a level of excellence that is uniform.”

In an effort to impose high-tech care in underserved populations, KentuckyOne is working with CHI’s research arm on a telemedicine program to try to affect change in hard to reach areas. “We’re working with leaders in ambulatory care and in women’s’ services, cardiovascular, and neurology to see how the use of telemedicine will allow us to reach out to areas in Kentucky where the presence of a physician is not a luxury for that community,” says Milburn. As it relates to cancer services, Varga says, “We will be using our telehealth clinics to facilitate the early diagnosis of cancer by making it easy for patients in small, remote communities to gain access to specialists’ consultative services without leaving their communities. In addition, while they are in the course of their treatment plans, they can similarly be followed in their local communities by their treating specialist. This is all consistent with our philosophy to deliver exceptional care close to home.” The telemedicine program is being piloted in Powell and Wolfe counties.

Even though we’ve been competitors in some instances, our goal is to retool the entire system to provide the best care for patients, and that is a goal everyone can get around.

We’re going to make a very large investment in cancer. We’re trying to really be thoughtful and deliberate about understanding what the Commonwealth needs, what the oncology care delivery model for next 20 years should look like and make investments in programs and technology that will support that.–Dr. Dan Varga

To receive its certification, Saint Joseph Outpatient Rehabilitation executed Oncology Rehab Partner’s conventional medicine and evidence-based standardized model of oncology rehabilitation service delivery, successfully implementing the program’s evaluation and treatment protocols and rehabilitation training. These services are covered by health insurance providers and will be offered to patients by a knowledgeable and sensitive medical staff that is specially trained to work with survivors of all forms of cancer.

Specialty caregivers from a pool of disciplines – including physicians, physical and occupational therapists, speech pathologists, dieticians, mental health professionals, etc. – will work together with each patient on a personalized rehabilitation plan to increase strength and energy, alleviate pain, and improve daily function and quality of life.