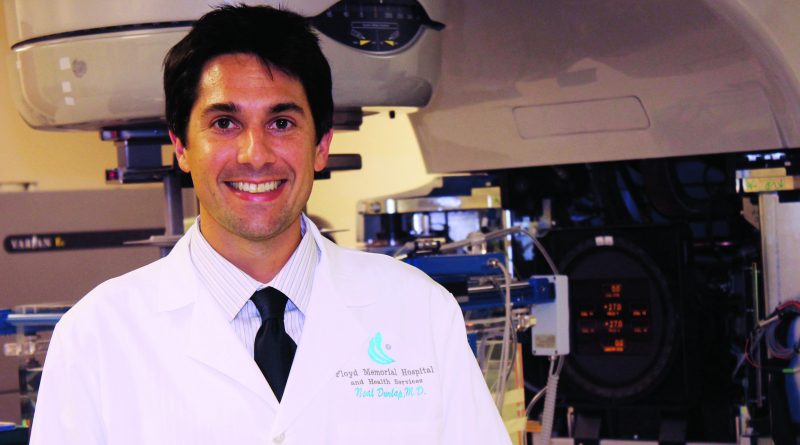 NEW ALBANY, IN Mathematical statistics and measurements abound in the science of healthcare. So, when a technology comes along that measures precision in millimeters and improves methods close to 100%, clinicians take notice.

The new Varian Linear Accelerator with stereotactic body radiotherapy (SBRT) and image guided radiotherapy (IGRT) at the Floyd Memorial Cancer Center of Indiana is predicted to cut treatment times by up to 90% in eligible patients, a staggering statistic in the delivery of healthcare. The linear accelerator is currently being assembled at the center and is planned to be operational in mid- to late-October.

Neal Dunlap, MD, radiation oncologist with the Floyd Memorial Cancer Center of Indiana, has been using SBRT therapy at the James Graham Brown Cancer Center in Louisville for years and is optimistic about bringing cutting-edge treatment closer to home for Southern Indiana patients.

The benefits of SBRT are multi-fold, including drastically reduced treatment times, fewer side effects, and a potential cost savings to providers and patients. In essence, SBRT techniques “allow for higher doses of radiation to smaller volumes of tumor,” says Dunlap. In contrast to conventional radiation therapy, the Varian Linear Accelerator utilizes a form of IGRT called cone beam CT to accurately assess a patients’ position utilizing CT imaging before and during each treatment to pinpoint tumor areas with greater precision. In doing so, there is a greater ability to avoid normal structures, limiting side effects for patients and increasing tolerance for therapy.

“The other key feature is what is called a ‘high output’ to deliver a lot of radiation in a short amount of time,” says Dunlap. This allows for quicker treatment of patients and the potential for higher tumor kill capabilities by delivering radiation at a higher dose rate, although this is still being studied.

The main indication for SBRT is inoperable lung cancer. Therapy with a standard accelerator platform can take approximately 35–40 treatments. With SBRT, the same therapy can be accomplished in one to five treatments. SBRT can also be used for brain, liver, lung, pancreas, prostate, and spinal cord lesions.

An active lung cancer screening program has also become one of the tools Floyd Memorial is using to fight the disease. Because Kentucky leads the nation in incidence and mortality rates of lung cancer, there is a state initiative, which Southern Indiana has embraced, to improve diagnosis and cause “stage migration” of the disease, thereby catching lung cancers earlier and improving outcomes.

“One of the big pushes of CMS is improving efficiency and quality and decreasing costs of care,” says Dunlap. “By having more accurate treatments, we’re able to deliver more cost effective medicine.” Consolidating radiation treatment courses will not only benefit patients in terms of fewer side effects, less treatment time, and potentially better outcomes, but will be a source of cost savings for the system and the patient.

Much attention has been given to the HPV vaccine debate, with ethical and religious beliefs clashing with scientific data. However, recent recommendations from the CDC, FDA, and American Academy of Pediatrics have advocated inoculating not only young women, but also boys and men between the ages of 11 and 26. One reason for this is a causal link between the HPV virus and rising cases of head and neck cancer.

Dunlap says 40% of head and neck cancers in the oropharynx are related to the HPV virus. “We’re routinely doing testing on these tumors to see if they contain that virus, and it’s important because patients with that viral component in their tumor do much better than the standard smoking-related head and neck cancer,” says Dunlap.

While head and neck cancer is low on the incidence list of all cancers, Kentucky and Southern Indiana have higher rates because of the prevalence of smoking in the region. Fortunately, patients in Louisville and Southern Indiana have access to experts like Dunlap, who was recruited to the University of Louisville for head and neck and lung cancers and is part of a multidisciplinary team of oncology professionals.

Floyd Memorial contracts with Dunlap and his two radiation oncologist colleagues to provide services at their comprehensive cancer center. These physicians also practice at the James Graham Brown Cancer Center in Louisville, which allows Southern Indiana patients access to experienced specialists but the convenience of treatment close to home at Floyd Memorial. “We’re really trying to translate what we have in an academic setting into the community,” says Dunlap.

The Floyd Memorial Cancer Center of Indiana has the advantage of an integrated PET/CT scanner. “We put [patients] in the position we want to treat them in and get a PET scan at the same time, which can be more accurate for delineation of tumor volumes and more accurate targeting,” advocates Dunlap.

THE FIELD OF RADIATION ONCOLOGY IS GOING TO EXPERIENCE A SHIFT TOWARDS REDUCING RADIATION TIMES, RESULTING IN LESS EXPENDITURES PER PATIENT, MORE EFFICIENT THROUGHPUT OF PATIENTS, AND LESS TREATMENT TIME FOR PATIENTS.