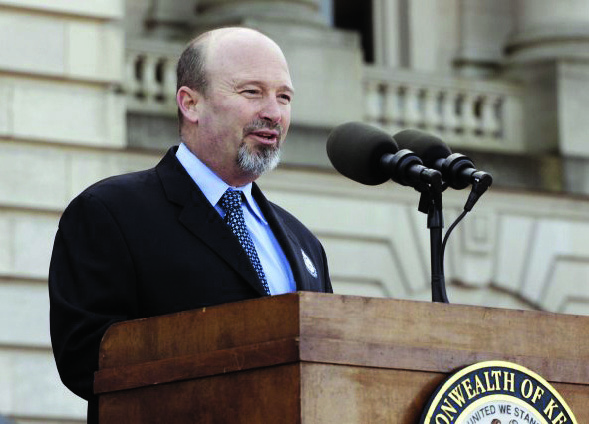 LEXINGTON Thanks to a little political muscle and a lot of good evidence, champions for colon cancer screening and prevention can now point to Kentucky as an emerging leader for public-private collaboration in the reduction of the disease’s burden on employers, taxpayers and health systems.

For eight years, Louisville gastroenterologist Dr. Whitney Jones has attacked colon cancer incidence in Kentucky through the education and advocacy non-profit he founded, the Colon Cancer Prevention Project (CCPP). Providing education to patients and health systems while advocating for effective public policy, CCPP action brought a dramatic improvement in the number of cancer screenings performed in Kentucky and improved its national ranking on this measure from 45th to 32nd. Notably, this accomplishment came about without a public investment in colon cancer screening.

Still, Kentucky continues to have the highest annual incidence rate for colorectal cancer. Without a program to fund colon cancer screenings, where early detection can eradicate the disease, cases affecting the uninsured create a heavy burden for communities as patients join the Medicaid rolls for a last chance at treatment. Past advocacy efforts by the CCPP led to the establishment of the Kentucky Colon Cancer Screening Program (KCCSP), a state-run agency designed to provide screenings at public health departments across the state, but after four years the program remained completely unfunded.

February 28, 2012 was a momentous day for colon cancer advocates. That was the day that Governor Steve Beshear, himself a cancer survivor, announced that his 2013–14 budget would allocate $1 million in the biennium to the KCCSP. The non-profit Kentucky Cancer Foundation (KCF), Beshear announced, would be responsible for raising an additional $1 million in private funds.

During a press conference in Frankfort, Beshear explained that “despite Kentucky’s current budget constraints, my administration is recommending several critical investments designed to tackle generational problems that plague our state. One of these investments is to provide colon cancer screenings for our uninsured Kentuckians.”

Leading the charge for the Kentucky Cancer Foundation, and undoubtedly responsible for the administrative turn-around, is the formidable political influence of former State Auditor Crit Luallen.

By securing Beshear’s support, Luallen has empowered private donors, for the first time, to take the leap of faith that their investment in cancer prevention will have a profound impact on Kentuckians. I had a chance to ask Luallen how the funding was at last secured, and in an email she replied how it was under less than ideal circumstances that she and the KCF approached Beshear with the request for state funding.

She wrote, “The state had been forced to make a number of across-the-board cuts as a result of the recession and resulting declines in state revenues. But the argument for this funding is a fairly simple and compelling one. We cannot accept the fact that we have the highest cancer mortality rate in the nation. We must begin to invest more in prevention. By investing in screening and early detection we are not only saving lives, we are saving money. Governor Beshear immediately understood and agreed and gave us his full support. He was also influenced by our commitment to raise funds to match the state’s appropriation.”

Luallen recalled that many legislators came forward to champion the allocation because they were, like she, personally touched by cancer. In April 2012, the funding program was approved with strong bipartisan support.

“As someone who has worked for six Governors before running myself for public office, I have seen Kentucky too often spend more and more on the problem at the expense of solutions,” Luallen concluded. “It is the goal of the new [Kentucky] Cancer Foundation to begin to put more sources into prevention and detection to change the course we are on in Cancer.”

In addition to Jones and Luallen, the founding trustees and board members of the foundation are Dr. David Stevens of Lexington, Lyle Hanna of Lexington; and Jack Hillard of Lexington.

When I caught up with Jones in late September, he was about to release RFPs for the pilot sites and was very optimistic about where the program is headed. “This is a proactive approach to reduce cancer incidence by removing polyps or finding those cancers earlier,” he said, “rather than waiting a year or two until the patient doesn’t have insurance and comes in with advanced cancer. We’re hoping we can prevent it completely by removing large polyps or, at minimum, identify them at a stage that is curable surgically without the need for chemo and radiation.”

The program is designed, like the breast and cervical programs, to recruit patients <250% poverty level who are eligible and appropriate for screening based on risk assessment. The screenings will take place at 5–10 pilot sites around the state in urban and rural settings.

As a novel program, Jones said it is imperative to “evaluate our successes and challenges.” Since health departments will administer they tests – and health departments don’t perform colonoscopies – the program will use fecal immunochemical test (FIT tests) and refer colonoscopies based on symptoms, family history, or positive FIT tests to community partners.

“One of the innovative issues is that we are not building any bricks and mortars here,” said Jones. “We are using existing channels and community linkages through the health departments and their community partners to provide this screening.”

Dr. Stephanie Mayfield, Commissioner of the state Department for Public Health, has brought resources in health information technology and data management to the project. Her expertise, including seven years as the director of the state’s public health laboratory, “has set us up for success,” said Jones, “so we will be able to evaluate what we are doing and be able to rapidly expand this service once we’ve completed the initial two years.”

With the goal of expanding beyond the pilot program to all health departments, Jones will be looking for data that builds the economic argument of potential savings to state Medicaid and Disability programs.

After the initial project, the KCF will raise private funds to pay for future prevention and early detection services for the uninsured including mammograms, pap smears, and smoking cessation programs. These funding programs support the state’s comprehensive strategies to reduce the incidence of cancer, collectively the Cancer Action Plan (CAP), that has been administered by the Kentucky Cancer Consortium (KCC) since 1999. Dr. Daniel Kenady, chair of the consortium, remarked that “cancer is too big and complex a problem for any one group to address efficiently. Comprehensive cancer control offers the power of collaboration as a key approach to reducing cancer.”

Once health departments are selected as pilot sites, Jones notes that they will “certainly be reaching out to local physicians, both primary care physicians and specialty physicians who perform endoscopy. There is no funding for treatment, unfortunately, in this $2 million, so we will be relying on community partners to provide treatment.”

“It is not optimal,” he said, “but breast and cervical [cancer programs] had no treatment dollars for years before it was enacted on a national level. It’s just the struggles we’re going to have to go through.”

The KCF aims to meet these challenges by recruiting strong board and medical advisory group members and, said Luallen, “by partnering with health care providers and others who are passionate about turning the numbers around.”

“THE ARGUMENT FOR THIS FUNDING IS A FAIRLY SIMPLE AND COMPELLING ONE. WE CANNOT ACCEPT THE FACT THAT WE HAVE THE HIGHEST CANCER MORTALITY RATE IN THE NATION. WE MUST BEGIN TO INVEST MORE IN PREVENTION. BY INVESTING IN SCREENING AND EARLY DETECTION WE ARE NOT ONLY SAVING LIVES, WE ARE SAVING MONEY.”– CRIT LUALLEN