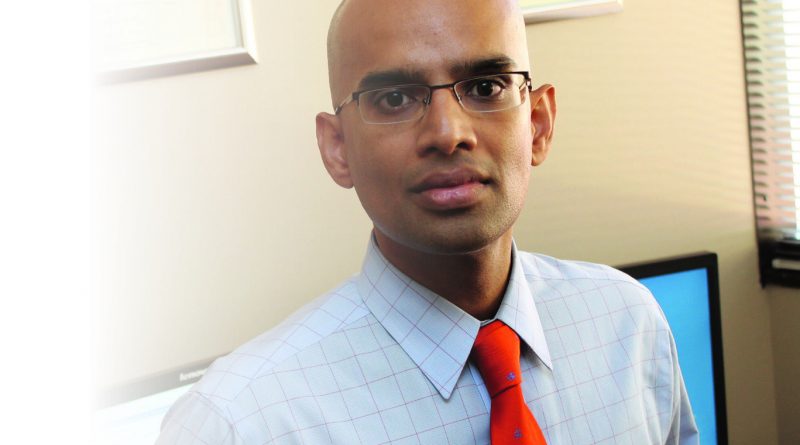 Consciousness. Myriad philosophers, theologians, and scientists have sought to define this concept for centuries, and it was an intellectual interest in consciousness and brain waves that led neurologist Satish Rao, MD, with Floyd Memorial Medical Group – Neurology, to the study of sleep medicine. Despite all the advancements of 21st century medicine and technology, according to Rao, the best tool for measuring consciousness is the 80-year-old EEG. “Even radiology scans do not replace the temporal millisecond resolution of brain waves,” he says. While brain waves cannot reveal the exact subject of a person’s thoughts, they can indicate states such as the eye movements of reading, drowsiness, dreaming, seizure, or slow-wave sleep.

A native Louisvillian, Rao received his medical degree and a master’s in neuroscience from U of L. He pursued postgraduate training in neurology, epilepsy, EEG, and sleep medicine at the Mayo Clinic in Rochester, Minnesota.

Having just celebrated his one-year anniversary with Floyd Memorial, Rao is part of a multidisciplinary team at Floyd Memorial’s Sleep Disorders Center that also includes two pulmonologists, Azmi Draw, MD, and Nuzhat Hasan, MD. Rao asserts that the multidisciplinary aspect is essential to comprehensive care. Each of the physicians sees patients in their own clinic and refers patients to their colleagues as necessary. The Sleep Disorders Center itself has four beds in its Floyd Memorial Hospital location and two beds in a Corydon, Indiana, diagnostic center.

The center offers a full range of sleep services. Obstructive sleep apnea (OSA), restless leg syndrome, and REM behavior disorders (RBD) are the most common diagnoses Rao sees. RBD is a condition where people act out their dreams. “When you go into dreaming sleep at night, all your skeletal muscles are paralyzed,” says Rao, with the exception of the extraocular muscles and diaphragm. However, in the case of some neurodegenerative disorders, such as Parkinson’s disease, Lewy body disease, and Multisystem Atrophy, “that normal paralysis is lost and [patients] start acting out their dreams.” Identified as a biomarker for these diseases, Rao cites a case series out of the Mayo Clinic, which says RBD can precede a neurodegenerative disorder by up to 50 years, as shown in one patient. With a 60% transformation rate, the clinical challenge becomes: how do you counsel a young RBD patient about their likelihood of developing Parkinson’s or a related disorder?

Rao estimates that an average 12 to 15 million Americans have OSA but about 70% are undiagnosed. Although awareness is on the rise, so is the prevalence of OSA, which is increasing at 1% a year, attributable to an increase in obesity and the aging population. Rao recommends the STOP-BANG or STOP questionnaires as easy-to-use tools for identifying potential OSA. In addition, Rao suggests physicians consider sleep apnea as a cause or link in a young person with hard to control hypertension, low testosterone with unknown cause, and nocturia or urinating at night with normal prostate exam. “[OSA] puts its little fingers into almost every organ system,” says Rao, and can cause mood, metabolic, sexual, and memory symptoms.

In addition to continuous positive airway pressure (CPAP), other treatments include surgeries such as uvulopalatopharyngoplasty (UPPP) and maxillomandibular advancement (MMA). While, MMA has reported success rates of 70% to 80%, Rao prefers the 100% effective, non-invasive CPAP to major craniofacial surgery. Palatal implants and oral appliances offer alternative treatments for those with mild OSA.

One promising treatment currently in clinical trials is the hypoglossal nerve stimulator (HGNS), which acts like a pacemaker with a battery pack implanted in the chest wall. The surgeon connects electrodes to cranial nerve 12, which controls the tongue. When turned on at night, the HGNS stimulates the tongue to protrude upon breathing in, opening up the airway.

SLEEP IS NOT A PASSIVE PROCESS. IT’S NOT YOUR BRAIN JUST RESTING. WHAT HAPPENS NEURO-CHEMICALLY IS AN ACTIVE PROCESS. IT’S LIKE A HIGHLY ORCHESTRATED SYMPHONY GOING ON IN THE BRAIN.– DR. SATISH RAO