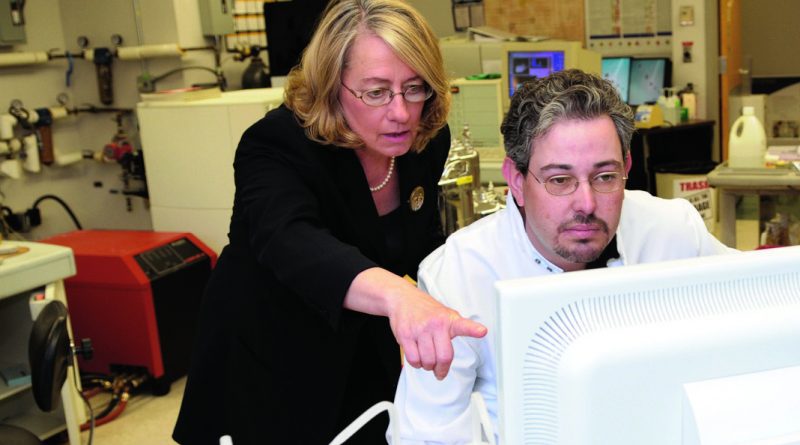 LOUISVILLE Decades in the making, a recently published breakthrough study co-authored by UofL researcher, Suzanne T. Ildstad, MD, demonstrates success in harnessing the renewal, differentiation, and mobilization powers of hematopoietic stem cells to establish donor chimerism and induce graft tolerance in kidney transplant patients. Published in Science Translational Medicine1 in March 2012, the FDA-approved phase 2 study utilizes a simultaneous approach to bone marrow and living donor kidney transplants in human leukocyte antigen (HLA) mismatched patients, with the goal of eliminating immunosuppressant drug therapy at one year post-transplant. “It’s been known for over 50 years if you get bone marrow from the same donor to take, then the kidney is accepted without needing any drugs,” says Ildstad, director of the Institute of Cellular Therapeutics (ICT) at UofL. “And that has been the focus of our research for the past 15 years now.”

In 2008, 17,413 Americans underwent kidney transplants2. Subjected to an immunosuppressant drug regimen of 15 to 25 pills daily for the rest of their lives, recipients are at increased risk for kidney failure, diabetes, opportunistic infections, high blood pressure, cardiovascular disease, and cancer.

Achieving chimerism, the state in which cells of more than one genetic source coexist in a singular organism, in organ transplantation essentially establishes a dual immune system in the recipient, where their bodies accept the donor tissue as their own and do not attack it.

“[The paper] is the report of the first eight subjects where we have been able to establish high levels of donor chimerism safely, without graft vs. host disease, without a syndrome called engraftment syndrome that some of our colleagues reported in a different study,” says Ildstad.

Ildstad is seeking patents for the process ICT has developed for isolating hematopoietic stem cells (HSC) and a facilitating cell, which she discovered, and removing potentially harmful cells in the bone marrow. All of the cell processing occurs in Louisville at the ICT lab. At this time, all bone marrow and kidney transplants happen at Northwestern University in Chicago, which was chosen for its reputation and high volume of kidney transplants. Joseph Leventhal, MD, at Northwestern is the principal investigator of the study and the first author on the paper.

Mary Jane Elliott, manager of ICT’s Bone Marrow Cell Processing Facility, supervises all of the cell processing, immunological testing, and facility maintenance. The process begins when clinicians at Northwestern give subjects a drug that mobilizes stem cells into their bloodstream. “Then they do an apheresis that collects all the blood, which includes the stem cells and the facilitating cells, and we receive the product fresh,” Elliott says. After 12 to 14 hours of cell processing and six to eight hours of quality assurance testing, the product is cryopreserved and shipped back to Chicago for infusion into the patient.

A critical component of the transplant process is conditioning with very low dose chemotherapy and total body irradiation to make space for the new bone marrow. Since phase 1 of the trial, they have had to gradually increase the conditioning until they achieved permanent take of the donor marrow. “Now we pretty reliably establish high levels of donor chimerism, and we manage the nadir, the decrease in white count, as an outpatient,” says Ildstad. Patient education is critical in managing the drop in white count, which usually lasts a week or less. The benefit of conditioning is that it helps the bone marrow and donor kidney take. Conditioning occurs five days before the kidney transplant, and the bone marrow transplant occurs one day after the kidney transplant. The patient goes home on day two after the surgery.

Patients start on a standard two-drug regimen of immunosuppression of Mycophenolate Mofetil (MMF) and Tacrilomus for the first six months, and then are slowly weaned. Immunosuppression is incrementally decreased at six and nine months post-transplant and stopped completely at 12 months if biopsies and blood tests evaluating renal function and donor chimerism are favorable.

Five of the first eight patients are completely off immunosuppression. The others are on very low dose monotherapy. The longest patient is three years out from his transplant and two years off all immunosuppression.

The method for measuring tolerance has been an evolutionary process. Originally, researchers relied on mixed lymphocyte reaction (MLR) where the recipient’s peripheral blood is mixed with donor cells to see if it responds. “Well it turns out that we had one patient who was tolerant by MLR who had a subclinical rejection episode on protocol biopsy, and other people have seen that too,” says Ildstad. “So we actually think the most reliable biomarker is chimerism. If you’ve got donor chimerism, that is the most reliable way to predict success in tapering of immunosuppression.”

Bone Marrow Studies in Other Diseases

The discovery of the facilitating cell and the success in utilizing bone marrow to induce chimerism has broad and promising implications for other organ transplants and multiple disease states. The program recently received FDA approval for an NIH grant to study delayed tolerance in kidney transplant recipients. The trial will try to establish chimerism in patients who have previously undergone a living-donor kidney transplant and whose donor is still living and able to donate bone marrow. If successful, Ildstad contends that this “will open the door to deceased donor transplantation.”

Researchers at ICT are currently formulating protocols and writing grants for living donor liver transplants in conjunction with Northwestern, and are also looking at kidney-pancreas transplants in type 1 diabetes. They will soon apply the protocol to type 1 diabetes using preemptive transplantation – transplanting bone marrow at the time of diagnosis with the hope of preventing patients from going on insulin. Work is also underway on several inherited blood disorders and metabolic disorders.

The Sky’s the Limit

By FDA standards, the kidney trial is in late phase 2 and will soon transition to phase 3, when the trial becomes multi-center. Since publishing the kidney study results, the centers have gotten an overwhelming response from practitioners, transplant centers, and patients. While Ildstad has a biotech startup company in Louisville called Regenerex, she will soon be looking for a commercial partner to help meet the increased demand for this cellular therapy.