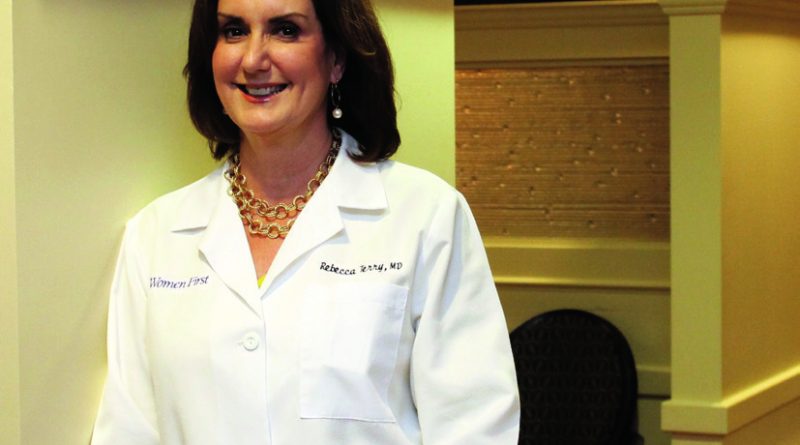 LOUISVILLE – Rebecca Booth, MD, OB/GYN with Women First of Louisville, estimates only 15 to 20% of her patients in the menopausal range accept traditional hormone therapy because of the negative stigmas and somewhat misleading information published regarding the risks. While she acknowledges that all medical therapy has risks, she believes estrogen has powerful benefits.

The average age for natural menopause is 52, although symptoms can begin as early as the mid-30s. “Women are cyclic by nature, so blood levels after puberty of the sex hormones vary widely across a normal menstrual cycle. Therefore blood levels become somewhat irrelevant with regard to an approach toward menopausal systems … Symptom relief becomes more relevant,” says Booth. As a species with ovaries programmed to retire, hormonal aging is a natural process, not a disease state. Consequently, treatment approaches are extremely individualized and should utilize the lowest dose possible to relieve symptoms with maximum benefit.

Booth makes a distinction between two issues: estrogen withdrawal and estrogen deficiency. The classic symptoms associated with menopause are the result of estrogen withdrawal in the brain. These may include: hot flashes, insomnia, irritability, palpitations and depression. “On parallel with that are symptoms that could result in disease processes that are from estrogen deficiency,” says Booth. A decline in estrogen with menopause is part of a woman’s biological design, but low estrogen levels can lead to a decrease in total body collagen, which can affect skin, vascular elasticity, and bone density. Low estrogen also results in increased insulin resistance and may lead to weight gain, as well as negative effects on lipid metabolism. Osteoporosis is currently one of the easiest of these disease processes to be objectively measured, however clinicians are giving more consideration to monitoring metabolic changes thanks to data linking menopause and an increase in type 2 diabetes.

In perimenopausal women, hormonal contraception, in the form of a low-dose birth control pill, vaginal ring, or hormonal IUD, is often effective at stabilizing the cycle and controlling symptoms of estrogen withdrawal and abnormal bleeding. SSRIs such as fluoxetine can be used as needed for PMS symptoms.

Hormonal treatment for menopausal women usually involves the use of transdermal estrogen, whether through a patch, gel, spray, or vaginal insert, which data shows carries a significantly diminished risk of a venous thromboembolic events relative to oral therapy. “Estrogen is the key to obtaining positive results with hormonal therapy,” says Booth, who only uses progestins to protect the lining of the uterus. Non-hormonal recommendations include nutrition, exercise, supplements, non-hormone medications, and over-the-counter products.

Osteoporosis is a skeletal disorder defined by compromised bone strength, which increases the risk of fracture. According to Rebecca Terry, MD, OB/GYN and comanaging partner of Women First and a certified clinical densitometrist, one in four women suffer from osteoporosis, and 50% of women over age 50 will have a bone fracture. “Loss of estrogen in the menopausal years is associated with an increased risk of osteoporosis because the first two years after we lose estrogen, we lose up to a third of our bone mass,” says Terry.

“The gold standard for detecting osteoporosis is a bone density scan,” says Terry. Dexagrams measure bone density in the hip, spine, or wrist. The International Society of Clinical Densitometry recommends the following populations be screened: women over 65 and men over 70, women over 50 with a history of fracture, women in menopause with history or risk of fracture, post-menopausal women under 65 with risk of fracture, and women who are stopping estrogen therapy.

To supplement bone density screening, Women’s First utilizes a computer-based algorithm developed by the World Health Organization called FRAX®, which calculates a person’s 10-year risk probability for hip and major osteoporotic fractures. FRAX is especially useful for general practitioners because it can detect osteopenia, low bone mass that is not yet severe enough to be called osteoporosis, and determine who warrants treatment.

When discussing treatment, Terry says it all starts with prevention, including getting adequate amounts of calcium and vitamin D, using estrogen as a part of hormone therapy, and considering lifestyle factors such as smoking, alcohol intake, and exercise. Once osteoporosis is diagnosed, treatments to increase bone mass, but more importantly lower fracture risk, include estrogen, bisphosphonate drugs, calcitonin, a RANK ligand inhibitor called Prolia®, and Forteo®, a parathyroid hormone.

Not only is estrogen effective in the prevention and treatment of osteoporosis by protecting bone mass, Terry also exalts the benefits of estrogen for other women’s health issues, such as preventing atrophy in the brain, protecting collage, and positively affecting sleep. Data shows that transdermal estrogen in women within the first five years of menopause decreases the risk of cardiovascular disease.

The healthcare costs of osteoporosis treatment are staggering in comparison to the inexpensive, simple measures that can be used to prevent it. In 2005, costs associated with osteoporosis were estimated at $17 billion. The estimate for 2025 is $25.3 billion a year. “Osteoporosis is a silent disease, but it takes so little to make a major impact,” says Terry.