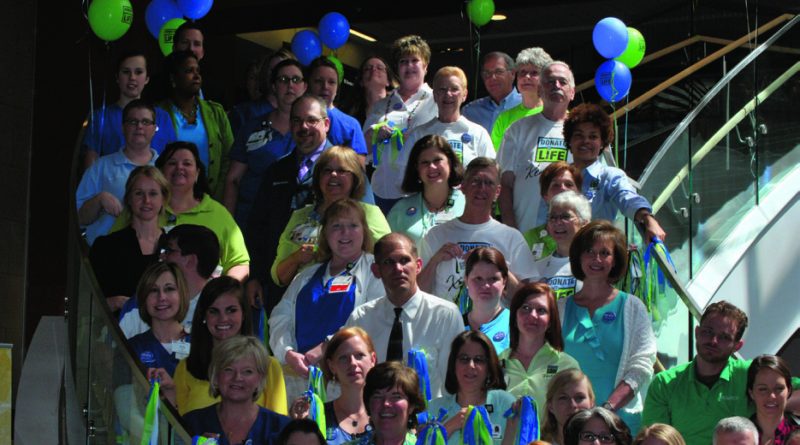 LEXINGTON As a Level 1 trauma center serving a population of over one million potential patients, the new UK Hospital has seen over 3,000 trauma victims in its first year of operation. The new trauma center opened in May 2011. Organ donation from trauma victims is the “ultimate silver lining in a very dark cloud” says Andrew Bernard, MD, director of Trauma Surgery at UK HealthCare, who joined the staff in 2003 after attending medical school and residency at UK College of Medicine. He became Director of Trauma and Acute Care Surgery in July 2011.

According to information provided by Kentucky Organ Donor Affiliates, (KODA) more than 800 Kentucky residents are waiting to receive hearts, livers, lungs, kidneys, and other organs. In 2011, 79 organs were transplanted from 24 organ donors at UK HealthCare alone. In Kentucky, there were 100 organ donors and 284 organs transplanted in 2011. On average, 18 people die every day in the US waiting for organ transplants, and there are more than 113,000 men, women, and children on the national waiting list.

The Kentucky Organ Donor Registry “gives hope to those in need of organ and tissue transplants, while leaving a legacy of generosity for the donor and his or her family,” says Bernard, who is often in the position of initiating the conversation between potential donor families and KODA representatives.

“My first priority in a trauma situation is preserving the life of the victim,” says Bernard. Fortunately, the life sustaining measures that are undertaken in trauma and critical care also maintain internal organs for possible transplant, he says. At some point, however, Bernard addresses the life-ending situation with the victim’s family and contacts KODA. “It is the hardest, yet the most rewarding part of my job,” Bernard says. KODA representatives meet first with the healthcare team and then with the victim’s family. “The KODA Family Support Liasions are grief counselors, are excellent at what they do, and when organ donations are arranged, many lives are positively affected,” adds Bernard.

KODA Family Support Liaisons (FSL) are engaged in a “dual advocacy role,” says Tom Threlkeld, KODA’s director of Client Services, as they represent both the wishes of the donor, the donor’s family, and the thousands of potential organ recipients on the waiting lists. Threlkeld has been with KODA since its inception in 1987 and oversees the FSL’s, who receive extensive training at KODA and at The Gift of Life Institute in Philadelphia in the difficult end of life conversations and organ donation.

KODA FSL’s take on multiple roles in the end of life crisis, says Threlkeld, such as tending to the physical and emotional needs of the victim’s family and facilitating communication between the healthcare team and the victim’s family through a series of “huddles” that ensure mutual understanding of the situation. Bernard says he has seen KODA counselors stay with the victim’s family non-stop, even for days, during the decision making process.

In some cases, FSL’s work with family members to understand the concept of “brain death” for patients on ventilators in ICU’s during a sequence of meetings while information is assimilated and processed. “In crisis situations, some family members only understand 20% of what they are told. Communications over a period of time are critical,” says Threlkeld.

KODA has seven Family Support Liaison professionals: three are based in Louisville, three in Central Kentucky, and one in Huntington, West Virginia.

The majority of donors are trauma victims from car or motorcycle accidents and some are stroke victims, says Bernard. In addition to heart, lung, kidney, liver, and pancreas, other tissue such as vein, cartilage, corneas, and skin can be used for transplantation. For the recipients, often “the only option for survival is a transplant,” states Bernard. More organs are needed. He says, “the demand exceeds the supply by as much as 10 to one.”

Threlkeld recalls what the mother of a young donor told him, “The opportunity for organ donation was a lifeline out of the abyss of my sorrow and grief.”