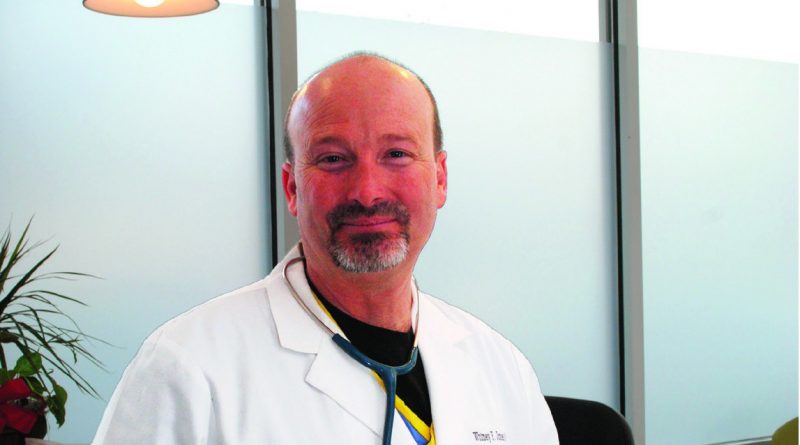 LOUISVILLE March is National Colon Cancer Awareness month, and perhaps no other state should be more aware of the effects of the disease than Kentucky, which historically has had the highest colon cancer incidence and mortality rates in the country. However, trends are slowly shifting, according to Whitney F. Jones, MD, founder of the Colon Cancer Prevention Project, a Kentucky advocacy group, and co-founder of the Kentucky Cancer Foundation, a new 501(c)(3) fundraising organization announced by Governor Steve Beshear at a press conference on February 28 and supported by a rally on the state Capitol steps on March 1. “Our rates of cancer death and cancer incidence are down 16 percent over the last decade,” says Jones. Kentucky has dropped to the third highest mortality rate in the U.S., and the state’s screening rates have gone from some of the nation’s worst 10 years ago to somewhere between 23rd and 32nd best, all of which Jones credits to increased education, awareness, and execution of colon cancer screening.

While progress has been made, Jones points to an on-going public health issue: Kentucky’s disparate populations, including those in low socio-economic and geographically urban areas, are not experiencing improvements to the same degree as the rest of the population. In addition, Kentucky’s Medicaid population, while they have access to screening, is not any more likely to be screened than the uninsured population. “There are two clear challenges before us:

Stakeholders have turned to the state legislature for help. This year Rep. Jim Glenn (D-Owensboro) and Rep. Bob DeWeese (R-Louisville) co-sponsored House Bill 55 (HB 55) that asks for $8 million over the biennium to fund the Kentucky Colon Cancer Screening Program (KCCSP), which was established in 2008 and has never been funded. That amount, while not enough to screen the optimum amount of 8000 people a year, would cover screening for 12,000 Kentuckians over the next two years and is a concession to the fiscal situation in Frankfort. The bill provides for a blended screening program for the uninsured and underinsured, utilizing fecal immunohistochemical testing (FIT) for normal risk patients and colonoscopy for symptomatic, high risk, and positive FIT patients. The bill includes funding for:

On a parallel plane, Jones has been involved in developing the Kentucky Cancer Foundation. Born out of the understanding that even with public funds, there will not be enough money to provide cancer screenings for all Kentuckians, the Foundation’s goal is to raise private money to match public funds to make screenings happen. “The folks at the Kentucky Cancer Foundation are going to be out raising funds to provide actual screenings, not policy, not overhead, to make sure that evidence-based interventions happen, and I would include in that colonoscopy and FIT, mammograms, pap smears, HPV vaccinations, and anything we can do to help people who are smoking right now to quit smoking,” says Jones. The Foundation will be governed by a board of trustees, including Jones, and will be tasked with overseeing fundraising and the allocation of those funds. There will also be an advisory committee made up of state cancer expects, public health experts, and Kentucky stakeholders.

In his budget, for the first time ever, Gov. Beshear has pledged up to $1 million over the biennium to match funds raised by the Kentucky Cancer Foundation to jumpstart the screening program. “It’s an amazing effort in good faith by Gov. Beshear to raise awareness on this agenda,” says Jones, one he hopes will challenge the legislature to fully fund HB 55.

Implementation of the screening programs will happen at a local level through health departments and community health centers, but Jones cautions that even if HB 55 is fully funded, there will not be enough money to reach every health department in the first two years.

HB 55 has unanimously passed the Health and Family Committee and proponents are in line to testify before the House Appropriations Revenue Committee, but a date has not yet been set.

We hope to push this argument of prevention and early detection way up the list and demonstrate through success in fundraising that, not only can we meet the need but Kentuckians understand the need and expect their legislator to step up. – Dr. Whitney F. Jones