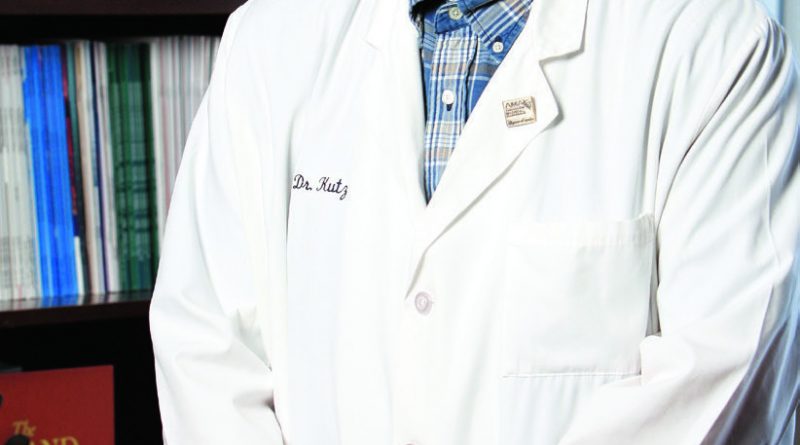 DANVILLE – Commonwealth Cancer Center is the newest member of UK HealthCare’s Markey Cancer Center Affiliate Network. The partnership is established with an emphasis on clinical research, with the goal of providing cancer patients in Commonwealth’s network of centers throughout the state expanded access to new clinical trials and emerging therapies in their own communities, as well as greater exposure to additional specialty and subspecialty physicians.

Commonwealth Cancer Centers of Kentucky becomes the eighth in the state to become a Markey Cancer Center affiliate, but is uniquely the only independent private network of cancer clinics among them. With six full-time medical oncology practices, a radiation oncology center (London), satellite clinics and a mobile PET/CT Scan unit, Commonwealth Cancer Center is committed to providing accessible care to communities in central and southeastern Kentucky. CCC offices are located in Danville, Frankfort, Russell Springs, Somerset, Corbin, London, Harrodsburg, and Columbia.

Pearce Named Chair of Dept. of Family and Community Medicine

LEXINGTON Dr. Kevin Pearce has been named of chair of the Department of Family and Community Medicine in the University of Kentucky College of Medicine, effective March 1. Dr. Pearce, who is also professor of family and community medicine, has served as interim chair of the department since Jan. 1, 2011.

Prior to joining the faculty at UK, Pearce was a faculty member at Wake Forest University School of Medicine in Winston-Salem, NC. He earned his medical degree at the University of Florida College of Medicine and completed his family practice residency training at the Medical College of Virginia, Fairfax, where he was appointed chief resident.

LEXINGTON According to Central Baptist Hospital, they are the first healthcare facility in the United States to receive the American Heart Association’s Mission: Lifeline® Heart Attack Receiving Center Accreditation.

The accreditation program — sponsored by the American Heart Association and the Society of Chest Pain Centers — recognizes centers that meet or exceed quality of care measures for people experiencing the most severe type of heart attack, ST-elevation myocardial infarction (STEMI), in which blood flow is completely blocked to a portion of the heart.

LOUISVILLE Some patients with advanced heart failure caused by cardiomyopathy are getting a new lease on life thanks to an innovative treatment program at Jewish Hospital, a part of KentuckyOne Health, and the University of Louisville.

Birks, professor of medicine, physiology and biophysics at the UofL School of Medicine, monitors the patients closely, and once the heart function improves to normal levels, the LVAD is removed. Once the LVAD is removed, medication therapy remains ongoing for patients, but they are able to function normally and return to work and other daily activities.

The program has led to the successful removal of LVADs from 11 patients at Jewish Hospital in just 18 months. The average time on the medication before the LVAD is removed has been six months, but it can be more than a year.

Jewish Hospital is the second facility in the country to remove LVADs from patients using the protocol, which was pioneered in England by Birks and her mentor, a well-known heart surgeon, Dr. Magdi Yacoub.

LEXINGTON On March 5, The University of Kentucky announced the state’s first implantation of the SynCardia Total Artificial Heart as a bridge to transplant. UK is one of 29 medical centers in the country certified to perform this procedure.

The Total Artificial Heart (TAH) is a device that contains the same components as a real human heart. For patients who are dying of end-stage biventricular failure, the only options are an immediate donor human heart or a TAH as a bridge to transplant. The TAH helps keep patients healthy while waiting on a viable donor heart to become available — which could take weeks, months, or even years.

UK surgeons Dr. Charles Hoopes, director of the UK Heart and Lung Transplant Program and the Mechanical Cardiac Support Program, and Dr. Mark Plunkett, chief of Cardiothoracic Surgery and the co-director of the Linda and Jack Gill Heart Institute, have both received certification from SynCardia to perform this procedure. To become eligible to perform the procedure, medical centers are required to undergo a stringent four-part certification process.

Hoopes and Plunkett led the surgical team during the procedure. Within days of the surgery, Poe was able to get up and move around his room.

Poe’s mobility improved greatly when he received the SynCardia Freedom Driver, a wearable, portable device that powers the Total Artificial Heart. The Freedom Driver weighs just 13.5 pounds and is carried in a small backpack or shoulder bag.

The kiosk, located on the first floor of the Marylou Whitney and John Hendrickson Cancer Care Facility for Women at the Markey Cancer Center, also includes a telephone that is programmed to connect the user with immediate assistance if needed or desired.

LOUISVILLE Matthew Scott, the world’s most successful hand transplant recipient and the first person in the United States to receive a hand transplant, returned to Louisville for his yearly check-up on Thursday, March 1, 2012.

Medical history was made 13 years ago on January 24–25, 1999, when Scott received his new left hand, an event that has greatly impacted the future of both transplantation and reconstructive surgery around the world. The 14 1/2 hour innovative procedure was performed at Jewish Hospital by Kleinert Kutz Hand Care Center and Christine M. Kleinert Institute for Hand and Microsurgery surgeons.

During his visit, Scott met with Marion, Indiana, resident Ronald Thurman, the eighth and latest patient to receive a hand transplant by the Kleinert Kutz Hand Care Center team of surgeons at Jewish Hospital, part of KentuckyOne Health. Thurman is receiving an intense physical therapy regiment that will help him gain function in his new right hand.

Thurman’s hand transplant took place during a 15 1/2 hour procedure on Wednesday, February 15, 2012. At 56 years old, he is the oldest patient to receive a transplant from the Louisville team.

Members of the hand transplant team include co-investigators of the Louisville Vascularized Composite Allograft (VCA) Program: Joseph Kutz, MD, partner with Kleinert Kutz Hand Care Center and director of the Christine M. Kleinert Institute for Hand and Microsurgery, and Michael Marvin, MD, chief of transplantation for Jewish Hospital and associate professor at the University of Louisville.

LOUISVILLE The Children’s Hospital Foundation is pleased to announce a $25,000 grant from the CVS Caremark Charitable Trust, the private foundation created by CVS Caremark Corporation, whose purpose is to help people on their path to better health by providing funding for health care, education, and community involvement initiatives. The grant to the foundation, in support of Kosair Children’s Hospital, is part of $4.3 million in grants awarded to 98 nonprofit organizations across the country as part of the 2011 grant cycle and includes multi-year grants from previous years.

The grant to Kosair Children’s Hospital, when paired with other community funding, will help establish the Bridges to the Future program, an initiative to help children with special health care needs such as cerebral palsy, congenital heart disease, cystic fibrosis, Down syndrome, and sickle cell anemia transition to adulthood.

LEXINGTON A study recently published by the University of Kentucky’s Scott Livingston, director of the UK Concussion Assessment Research Lab and assistant professor in the Department of Rehabilitation Sciences, shows that physiological problems stemming from a concussion may continue to present in the patient even after standard symptoms subside.

Conducted while he was a graduate student at the University of Virginia, Livingston’s study was just published in the February 2012 issue of the Journal of Clinical Neurophysiology. The study used motor-evoked potentials (MEPs) — an electrophysiological measurement that can provide hard evidence for changes in brain function — to determine if any physiological abnormalities followed a similar recovery pattern to self-reported symptoms and neuropsychological testing.

Livingston’s study enrolled 18 collegiate athletes — nine who had been concussed within the previous 24 hours, and nine who had not experienced a concussion. Subjects were evaluated for evidence of concussion based on self-reported symptoms, computerized neurocognitive test performance, and MEPs for a period of 10 days. Post-concussion symptoms were more frequent and greater in severity in the immediate timeframe after the injury (24–72 hours) and decreased in the following days. Some subjects reported no symptoms by day 10, though others did not have complete symptoms resolution by that time. Neurocognitive deficits followed a similar pattern, proving greater just after the injury and returning to normal (or closer to normal) by day 10.

MEPs, however, showed delays in response time and smaller MEP size which continued up to day 10, with these physiological changes actually increasing as the concussed athletes’ symptoms decreased and cognitive functioning improved.

“Further investigation of MEPs in concussed athletes is needed, especially to assess how long the disturbances in physiological functioning continue after those initial 10 days post-injury,” Livingston said.

LEXINGTON The University of Kentucky has announced that Dr. Daret St. Clair, the James Graham Brown Endowed Chair and professor of toxicology, has published the first comprehensive study that provides insight into the relationship between two types of suppressors in cancerous tumors. The results will enhance the understanding of transcriptional mechanisms in carcinogenesis.

The study was supported by a National Cancer Institute research grant and was recently published in Cancer Research. St. Clair and her team generated transgenic mice expressing a luciferase reporter gene under the control of human MnSOD promoter-enhancer elements and investigated the changes of MnSOD transcription using the 7,12-dimethylbenz(a)anthracene (DMBA)/12-O-tetradecanoylphorbol-l3-acetate (TPA) multistage skin carcinogenesis model.

The results identify MnSOD as a p53-regulated gene that switches between early and advanced stages of cancer. These findings also provide strong support for the development of a means to reactivate p53 for the prevention of tumor progression.

LEXINGTON Results have just been released from an NIH study conducted at multiple sites, including the University of Kentucky, indicating that an autoinjector pen is a faster and possibly more effective way for emergency medical personnel to treat serious seizures. The study appears in the Feb. 16, 2012 issue of The New England Journal of Medicine.

Typically, when paramedics respond to a patient with status epilepticus (a prolonged seizure lasting longer than five minutes), they attempt to start an IV to deliver anticonvulsant medication to the patient. However, starting an IV in a patient who is experiencing seizures can be challenging for paramedics and waste precious time. An autoinjector — similar to the EpiPen used to treat serious allergic reactions — saves time and delivers needed medication in a quick, consistent way. The autoinjector delivers medication directly into the thigh muscle as an intramuscular injection.

The investigators, at UK and other institutions, compared two medicines known to be effective in controlling seizures, midazolam and lorazepam. Both are benzodiazepines, a class of sedating anticonvulsant drugs. Midazolam was a candidate for injection because it is rapidly absorbed from muscle. Lorazepam must be given by IV. The study found that 73 percent of patients in the group receiving midazolam via autoinjector were seizure-free upon arrival at the hospital, compared to 63 percent of patients who received IV treatment with lorazepam. Patients treated with midazolam were also less likely to require hospitalization than those receiving IV lorazepam. Among those admitted, both groups had similarly low rates of recurrent seizures.

Dr. Roger Humphries, chair of the UK Department of Emergency Medicine, is the principal investigator of the study’s UK site.