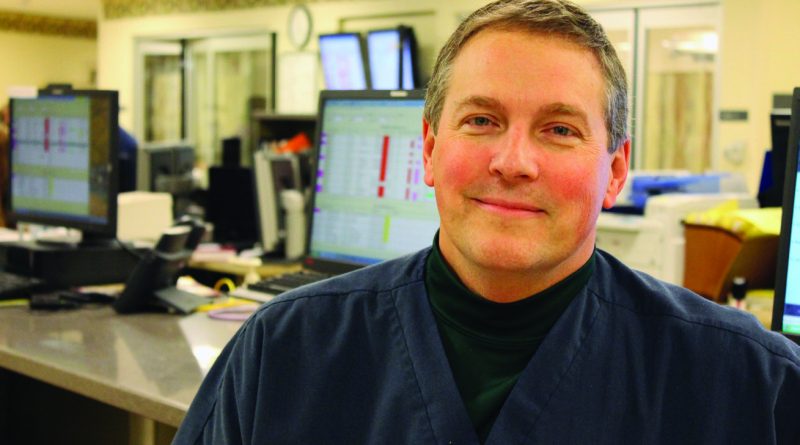 NEW ALBANY, IN In medicine, most new therapies require years of slow, methodical research and face at least a moderate amount of resistance to change before actually being implemented. In the case of therapeutic hypothermia, a striking increase in survival rates led to remarkably rapid acceptance and implementation.

Two studies published in peer-reviewed medical journals in the early 2000s demonstrated the dramatic results achieved with the adoption of therapeutic hypothermia for patients with a return of spontaneous circulation (ROSC), meaning those who are resuscitated from cardiac arrest. In 2005, the American Heart Association included therapeutic hypothermia in its guidelines for patients suffering cardiac arrest outside the hospital. According to Floyd Memorial Emergency Medicine physician Thomas Harris, MD, the studies’ remarkable results prompted a widespread reaction in the medical community. “If you look nationally prior to the hypothermia era, you’re looking at 10 percent survival-to-discharge for out-of-hospital cardiac arrests, and in some of the more proficient places, maybe double that,” says Harris. “In one study, they improved from 19 percent to 49 percent survival rate.”

A survival rate that essentially doubles may be the most obvious benefit, but better neurologic function and a better quality of life at discharge are also primary benefits. Interventional cardiologist Srini Manchi, MD, with Cardiovascular Associates of Southern Indiana, explains the physiology behind the method. “With cardiac arrest you have very little blood flow to the body. Low blood flow means lower oxygen flow to the tissues, and low oxygen to the brain or other tissues causes the body to start metabolizing an anaerobic pathway,” says Manchi. However, with the introduction of therapeutic hypothermia, lower body temperatures result in a lower metabolism rate, minimizing the damage to tissues. Harris adds, “The complication rate for people who are cooled is basically the same as those not cooled, so there isn’t really a downside to it.”

For patients resuscitated in the field or shortly after they arrive in the ER, the concept is to bring their core temperature down to about 91 or 92 degrees Fahrenheit. This is accomplished by methods as low-tech as placing ice packs on the patient in areas of high blood flow, such as the groin, axilla, and the back of the neck, and administering cold IV fluids. Higher tech tools include a cooling blanket and esophageal or rectal probes to constantly monitor temperature. The goal is to reach the targeted temperature within two hours of the initial event, and the faster the better. The temperature is then maintained for about 24 hours before the patient is rewarmed.

Cooling begins in the field, where EMS personnel administer cold IV fluids to patients resuscitated from cardiac arrest when possible. The criteria for therapeutic hypothermia treatment include non-traumatic cardiac arrest in patients over 18, who have return of spontaneous circulation (ROSC) within 60 minutes of the event, and are comatose. Cooling must begin within six hours of the ROSC.

A Team of Care Providers

The technique would not be possible without the variety of caregivers who are critical to its implementation. “In addition to EMS people in the field, it’s a continuum of care process,” says Manchi. The process begins with bystanders or family members who first administer CPR, first responders and EMS, multiple physician specialists – including ER physicians, cardiologists, neurologists, pulmonologists, and intensivists – and CCU or ICU nurses. Harris agrees, “We’ve been pretty aggressive here in getting the pre-hospital aspect,” citing that ambulances in New Albany carry chilled normal saline to start cold IV fluids in the field. “We’ve developed a protocol within the hospital to make sure everyone is on same page and make treatment as routine and expected as possible,” says Harris.

ER physicians are the gateway and the catalyst for this technique. They evaluate patients, begin lowering temperatures with ice packs and IV fluids (if they have not already been started), and consult cardiologists. If an arrest is the result of a myocardial infarction (MI), patients are whisked to the cath lab for treatment, with cooling started concurrently. Cardiac arrest can also be caused by a primary arrhythmia or unidentified cardiomyopathy.

Cardiologists are integral in determining the cause of the cardiac arrest, which is crucial in preventing further arrest. Cardiac catheterization in used to determine if there is any blockage causing an arrhythmia and to correct it. If there is a primary arrhythmia, the irregular heart beat restricts blood flow to the heart and brain. “That can happen mainly due to chemical abnormalities, low potassium or magnesium levels, or some patients go into renal failure, which can cause potassium to go very high and can cause cardiac arrest,” says Manchi.

In addition to cardiac interventions, cardiologists use ultrasound to confirm the LV ejection fraction, manage hemodynamics and medications, and sometimes put in a balloon pump for patients with severe damage to the heart muscle. Once a patient is transferred to CCU or ICU, neurologists monitor brain function with the use of EEGs, and pulmonologists oversee oxygen levels and check for pneumonia.

Harris describes the interaction between emergency medicine physicians, cardiologists, and other treating physicians as a “seamless transition.” He attributes the team mentality and success to the overwhelming research, the backing of professional organizations such as the American College of Emergency Physicians and the American College of Cardiology, and the use of a universal protocol. Nurses are another critical component in successfully executing the protocol, as they are charged with a significant amount of time in carefully monitoring these patients.

“There has been a big effort to improve cardiac awareness and the chain of treatment, but there was sort of this ceiling on overall survival rates,” says Harris. Despite efforts to educate the public to call for an ambulance, better notification of EMS, and placing automated external defibrillators in public places, the survival rate was still 10 to 15 percent. That rate has been improved by the use of therapeutic hypothermia in many communities.

With its marked success, hypothermia is now being evaluated for minimizing brain injury in the case of stroke and pediatric trauma, but those treatments are still in the experimental phase.

Research and anecdotal evidence demonstrate that prior to hypothermia treatment, patients may have survived but would have more likely had severe neurological impairment. With therapeutic hypothermia, the result is better neurological function and better quality of life at discharge.