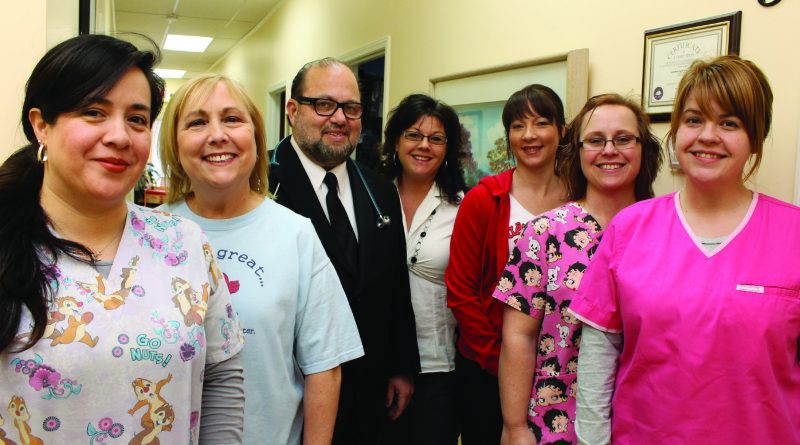 LOUISVILLE When asked about the forms of electrophysiological congenital conditions he sees in his practice as a pediatric cardiologist, Juan Villafañe, MD, FACC, FHRS-CCDS, FAAP, describes one condition – supraventricular tachycardia (SVT) – as a diagnosis where kids’ heartbeats can reach over 300 beats per minute. When you hear about the depth and breadth of Villafañe’s work, you cannot help but equate his dedication and spirit with an outpacing heart.

A professor of Pediatrics for the University of Kentucky, Villafañe’s professional pursuits also include his election as the governor of the American College of Cardiology (ACC) in Kentucky, from 2010 to 2013. Comprised of 39,000 members across the United States, the ACC’s web site describes the organization as being “dedicated to enhancing the lives of cardiovascular patients through continuous quality improvement, patient-centered care, payment innovation, and professionalism,” a message Villafañe seems to take to heart. The ACC is overseen by a Board of Governors, like Villafañe, who are each elected to a three-year term and serve as liaisons between the local community and national leadership. In his role as governor, Villafañe has worked not only to improve treatment options for cardiac patients but also to advocate for prevention issues, which have a profound effect on patient outcomes, particularly in Kentucky where obesity and tobacco-use are high.

A COALITION OF LIKE-MINDED ADVOCATES

In 2010, Villafañe formed a coalition of 12 major organizations to address the issues of childhood obesity and tobacco use. By bringing together representatives from the American Heart Association (AHA), the American Academy of Pediatrics (AAP), and the American Medical Association, Villafañe initiated an alliance on two of Kentucky’s largest risk factors for cardiovascular disease. The group now includes representatives from the ACC, AHA, AAP, Department of Health, Greater Louisville Medical Society, University of Louisville, and University of Kentucky, among others. They meet regularly to advocate for children with childhood obesity, and now, for the second year, Villafañe and the ACC have teamed up with the AHA to meet with legislators in Frankfort and lobby for a smoke-free Kentucky. “We have an epidemic of obesity,” says Villafañe, citing Kentucky’s rate of childhood obesity as one of the highest in the nation. “And we have a big problem with tobacco. We need to work on it together and solve this problem.”

The March of Dimes estimates that annually in the United States, 35,000 infants, or 1 in every 125, are born with heart defects. In fact, congenital heart defects (CHD) are the number one cause of birth defect-related deaths in infants.

Complex congenital heart defects involve structural abnormalities to the valves, arteries, or veins supplying the heart. Complex conditions can include hypoplastic left ventricle, where the main pumping chamber is rudimentary; ventricular septal defects (VSD), where a large hole in the ventricle is often seen with other anomalies such as obstructive, missing, or leaky valves; an atrioventricular (AV) canal defect, a large hole in the middle of the heart; or tetralogy of Fallot, which not only indicates a large hole but also obstructed vessels or valves.

While complex heart defects do typically require surgery, advances in treatment options for CHD have improved survival rates. Unfortunately this has created an entirely new dilemma – a population without specialized providers. “Fifteen years ago, many of those complex congenital heart kids did not survive, depending on the etiology of their disease,” says Villafañe. He cites the example of hypoplastic left heart syndrome in which two-thirds of patients now survive into adulthood. “Now there are over one million adults that survived out of childhood, and they need follow-up. The problem is so big there are now more adults with congenital heart defects than children.” Specialized centers now exist in larger cities around the U.S. focusing solely on complex congenital heart diagnoses, but in smaller states and rural areas, the only option for these adult patients is to be followed by pediatric cardiologists. The adverse result is that 50 percent of adults with CHD do not get the follow-up they need and are therefore at greater risk for sudden death, heart failure, or severe disability.

In fact, Villafañe identifies the problem as so crucial, he and a colleague from Columbus, Ohio, are presenting the issue of improving follow-up care for adults with CHD to the Board of Governors of the ACC at an upcoming leadership conference. Their proposal is a national initiative involving partnering the Adult Congenital Heart Association (ACHA), an organization of adult and child patients, with physicians interested in helping them. “We’re going to implement a new plan to improve follow-up care for adults with CHD but also to educate both general cardiologists and patients. We need to create more awareness,” says Villafañe. “In general, throughout the US, there are many cardiologists who for whatever reason don’t follow them [adult CHD patients] anymore.” The program is proposed to begin with five pilot states.

In addition to congenital heart defects, Villafañe also specializes in electrophysiology. “Many patients with complex congenital heart defects can also have arrhythmias, where the heart is not beating regularly,” says Villafañe. The electrical conduction system of the heart includes a natural pacemaker called the sinus node, which controls the contractions and pumping of the heart by transmitting electrical signals through the atrial chambers to the atrioventricular (AV) node and from there to the ventricles.

Cardiac electrophysiology deals with the disorders of the heart’s electrical conduction system. “What we see the most of in kids are called extra heartbeats or premature beats,” says Villafañe. As common as one-in-four children, if the heart is normal, they are not considered complex cases. Villafañe’s practice includes a pacemaker, defibrillator, and arrhythmia clinic to address the needs of his complex heart patients.

Complex conditions necessitating an artificial pacemaker can include failure of the sinus node, typically occurring in children who have undergone open heart surgery and sustained damage to the sinus node; congenital AV block, which involves the inability of the sinus node to communicate with the AV node and carries a two percent incidence of sudden death; and surgery-induced AV block.

Another form of congenital electrophysiological defect Villafañe sees in his practice includes complex heart problems associated with many or absent spleen(s), which may result in an “orchestra” of arrhythmias.

Referenced at the beginning of this article, tachycardia or SVT in young children is treated with medication in most cases until the children are old enough to undergo endocardial radiofrequency ablation, which is successful in 90 percent of cases. On the other hand, ventricular tachycardia (VT) is quite serious. “The incidence of sudden death, depending on etiology of the VT, is anywhere between one and six percent, which is pretty high,” says Villafañe. In some cases VT can degenerate to ventricular fibrillation (v-fib) and result in death. While this is seen often in adults with cardiac disease, it is rarer in children. Bradyarrhythmia refers to a slower than normal heart rate and can induce fainting from a lack of optimal blood flow to the brain.

Long QT syndrome is a congenital abnormality pertaining to the relaxation of the heart, and depending on the subtype of the syndrome, has a mortality rate of 0.3 to one percent per year in children. “What we use to treat them is beta-blockers. With them we can reduce the risk by more than half,” says Villafañe. Patients with long QT syndrome are at risk for torsades de pointes, a polymorphic ventricular tachycardia much like v-fib, which can cause fainting, seizures, or death. According to Villafañe, he does not see a lot of defibrillators in children, but they are sometimes used in risky cases of long QT syndrome.

Short QT syndrome can also produce sudden death in children. “I was the first to publish a report on short QT syndrome in kids because it’s very rare,” attributes Villafañe. He is currently writing an article on an international study of 22 young patients with short QT syndrome, nine of whom have defibrillators, in centers across the Netherlands, France, Italy, Canada, and the US. Additionally, catecholaminergic polymorphic ventricular tachycardia and Brugada syndrome are syndromes that are rare in children but can induce sudden cardiac death.

However, despite all the clinics and medical opportunities Villafañe provides for his patients, he believes that is only part of his job. “I think we have to advocate for our patients, whether they are one-year-old or 80-years-old, and we need to get together and fight for them,” he says.

With advancements in complex congenital heart defect care, we are now facing a dilemma. There are over one million adult survivors of childhood CHD that need specialized providers to manage their follow-up care.