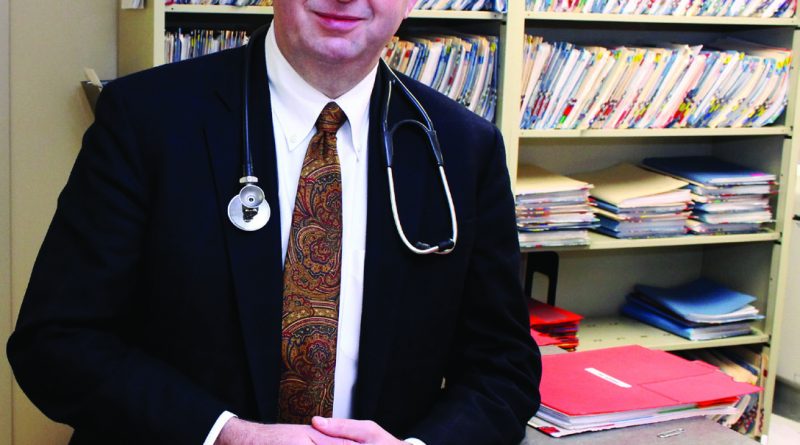 Cardiologist Jesse Adams, III, MD, describes the relationships of professional and community organizations such as the American Academy of Cardiologists (ACC) and the American Heart Association (AHA) as “pieces of a puzzle.” It is that puzzle through which he is “committed to working collaboratively with family practice physicians, internists, OB/GYNs, hospitalists, ER doctors, business leaders, and anyone who has been touched by heart disease.” In Kentucky, that’s a pretty good-sized puzzle, which Adams approaches from a multi-dimensional perspective that includes local, state, and national issues.

Adams is the current governor-elect of the ACC, president of the Kentuckiana chapter of the AHA, and a member of Jewish Medical Center Cardiologists, the oldest cardiology group in Kentucky, founded in 1922. He and his partners provide a full range of cardiovascular care throughout the Greater Louisville metro area and in rural clinical areas such as LaGrange, Bardstown, Fort Knox, and southern Indiana.

Fitting the puzzle pieces together on a daily basis between patients and fellow cardiologists is what motivates Adams. Steering a course through troubled waters, during a perfect storm, might be another metaphor to describe the challenges facing cardiologists today in Kentucky.

When wearing his American Heart Association president’s hat, Adams lists the well-known Kentucky challenges: a state that is a national leader in heart disease; some of the highest rates of adult and childhood obesity; high tobacco use; and a growing rate of tobacco use among adults under 30. “It appears that unless something changes,” says Adams, “we will have a generation that lives shorter lives than its parents, and that has never happened before.”

Persuading legislators to fund smoking cessation programs through Medicaid is one initiative that Adams is tackling. He strongly believes that the cost benefit of reducing tobacco use versus patient care from the heart and lung disease caused by smoking is obvious. The challenge, he acknowledges, is getting new state programs funded in difficult economic times. He points however to North Carolina, another tobacco growing state that has state-funded tobacco-use programs, which have shown dramatic improvements in reducing smoking. “If it can be done in North Carolina, why not in Kentucky?” asks Adams.”

As a practicing cardiologist, Adams sees first-hand how recent Medicare payment reductions have negatively impacted his practice, such as reducing reimbursements for Cardiolite stress tests, a standard diagnostic tool, as much as 25 to 40 percent. “Many of the cuts we’ve seen in the last few years under healthcare reform have focused specifically on what cardiologists do,” says Adams. “As a small business, when your income is reduced with no input from yourself, it’s tough.”

Patient care remains his primary concern, including addressing the risk factors of heart disease: diet, exercise, lifestyle, and genetics. He laments the “portion distortion” that has overtaken American eating habits while lifestyle has reduced physical activity. He encourages his patients to find a time and place to be active, and assists them in developing a plan that meets the needs of their individual situation. Walking is an easy and effective way to add exercise to a patient’s lifestyle, but for some of his more rural patients, it can be difficult to accomplish. He has helped patients develop exercise routines that include, “walking in the neighborhood, around the airport, around the house, and even laps around the bedroom.”

The Micro and the Macro Issues of Healthcare

Being governor-elect of the Kentucky ACC gives Adams the opportunity “to lead and serve his fellow cardiologists.” (His three-year term as governor begins in March 2013.) Working on the Board of Directors for current ACC Governor Juan Villafane, MD, FACC, (who is featured in this month’s cover story), Adams is dedicated to the chapter’s mission to “advocate for quality cardiovascular care through education, research, promotion, development, and application of standards and guidelines and to influence health care policy.”

“The current political process is arcane, to say the least,” says Adams. “An evolutionary change will take place because the current healthcare delivery system in the US is not sustainable.” This is why he actively participates in organized medicine and healthcare associations. His 360-degree approach to healthcare, seeing the local, state, and national implications of challenges and solutions, gives him a global perspective that benefits his patients, colleagues, and the community. “Daily, the most important thing I do is take care of the patient sitting in front of me,” says Adams. “But on a larger scale, it is incumbent upon us to get involved to address the problems we all face.”